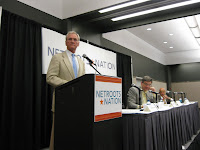 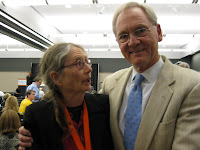 I was feeling all down in the dumps this week and so my doctor prescribed "Abilify" for me. Holy sheep dookie! That drug is a nightmare and has very strange side effects. During the one night that I took it, I woke up three different times -- consumed with body-wracking HICCUPS! Hiccups? You gotta be kidding. And I had three different episodes of terrible crippling leg cramps as well. And neither of these symptoms were even listed on Abilify's side-effects chart. And, in addition, I also had several of the symptoms that were listed: Pounding headaches, tiredness, blurred vision, coated tongue, constipation and "unusual mental or mood changes". And all this came from just one little two-mg pill (that costs $20 per pill!)

Screw that. No bad-hair-day prevention plan is worth doing all of that nasty stuff to my body. I'm gonna freaking cheer up my own self. So I went off to the movies and saw "Julie and Julia" instead -- much better. And no horrible side-effects were involved.
At one point in the movie, Julia Child's husband is falsely accused of all sorts of terrible things by members of Senator Joe McCarthy's notorious black-suited attack squad. Apparently Paul Child served in China during World War II and so he was targeted for rigorous grilling by one of the dread HUAC sub-committees or something. But as I sat there and watched Stanley Tucci play out this scene, I thought, "This whole scenario sounds really familiar." I had witnessed a scene like that somewhere else recently. But where? At the movies? Nope. I know! At the recent Netroots Nation convention.
At one seminar at NN9, Governor Don Siegelman had talked about how, when he had been governor of Alabama, he had been framed by a Republican prosecutor whose husband used to be his opponent's campaign manager. Siegelman had been framed for a so-called crime that "there are not enough prisons in America to hold all the government officials that have done the same thing that Governor Siegelman is accused of doing."
According to the Legal Schnauzer blog, "Recent Texas governors, including George W. Bush, took major donations from people and then appointed them to state boards and commissions.... The Houston Chronicle reports that Texas Governor Rick Perry (a Republican) has received almost $5 million in donations from people he appointed to state boards and commissions. And the newspaper reports that other Texas governors, including one who goes by "Dubya," have followed the same practice." So. How come Dubya isn't in jail?
Have the Republicans been holding witch-hunt trials all across our nation in 2007 and 2008 -- just like they did back in 1954? You bet they have. That's modern-day McCarthyism! And our Julia would have stood up to those goons -- and fricasseed their arses had she been in charge -- either then or now.
After he finished his talk, I asked Governor Siegelman if I could take a photo of him. "Wouldn't you rather be in the picture with me?" he replied. Sure!
Dr. Cyril Wecht spoke next at the seminar. He had been charged with 23 felony counts of sending personal faxes over the county fax machine. 23 felonies -- totaling $23. "First I was threatened, and then my family was threatened by these malevolent right-wingers. You have to know how these guys work -- the FBI agent on my case forged the signatures of other FBI agents onto documents. That's a felony."
Apparently the Department of Justice had been hijacked by Karl Rove during the period that Bush occupied the White House -- just like when McCarthy had hijacked it during the 1950s. During the sad times after Bush was appointed to the White House by the Supreme Court's rude nullification of our states' rights, approximately 700 Democrats or centrist Republicans were charged with made-up crimes -- and nearly 100% of these cases were tried by Bush-appointed judges.
"I am extremely disappointed," stated Dr. Wecht, "that the Obama administration has not made the moves that they have to make to clean out the Justice Department. Get off your [bottoms] and replace these people!"
Dr. Wecht, like all of the other 700 victims of the Rove-controlled Department of Justice, faced political and financial ruin due to these McCarthy-like accusations. Dr. Wecht fought back and was able to escape a guilty verdict by spending a fortune on legal fees but the rest of the 700, who were not as tenacious as Dr. Wecht, should never have been tried and should never have been convicted. "I am still in debt for six million dollars in legal fees," stated Dr. Wecht. "My family was threatened. I want accountability. "
So. Here's my point. Julie, the young woman in today's movie, found happiness by cooking all 524 of Julia Child's recipes in just 365 days. Maybe I can do something like that too -- find happiness by comparing all of McCarthy's crimes with all the crimes committed by Bush, Rove and Cheney. And for a truly happy ending? Maybe just 365 days from now I can get Bush, Rove and Cheney censured by Congress just like McCarthy.
That would make me MUCH happier than Abilify ever could!
Posted by Jane Stillwater