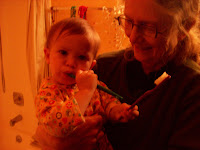 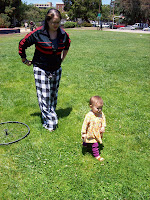 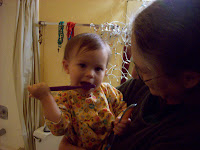 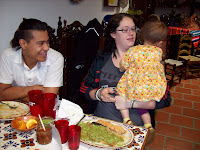 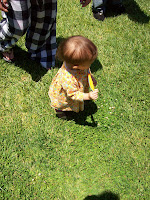 California: Famous for its rotting teeth & lack of insight
(Photos are of baby Mena dutifully brushing her teeth after eating guacomole at La Fiesta and Picoso in Berkeley)

Can you believe it? Legislators here in California have just canceled our state's dental insurance program. And you know what that means. If you can't afford to pay over a thousand dollars per tooth for fillings, root canals and crowns, you are not going to have any more teeth.

Five or ten years from now, everyone in California who can't afford the high cost of dental work is going to have rotting, rotten and/or missing teeth. Eeuuww!

By approximately 2015, you are going to be able to walk down any street in California (except perhaps Rodeo Drive) and almost nobody will be smiling. Why not? Because all of us who can no longer afford to have our teeth cleaned and our cavities filled are going to be afraid to open our mouths -- for fear of exposing our bare gums and hitting you with dragon breath!

"I don't want to move to California," people will say. "People there all have bad teeth. I wanna stay in Quebec (or even Guadalajara), where people still smile a lot." And they have a lot more to be smiling about too. Canada has single-payer healthcare. And even Mexico offers universal health insurance.

According to Jeri Jenkins, co-president of the California Nurses' Association, "Right now we are the only nation on earth that barters human life for money." Or barters it for discounts from the Tooth Fairy.

And California legislators, in their infinite wisdom, have also just passed a law that we can no longer get eye exams and even GLASSES on the state's medical insurance program. Do I even have to tell you what that means? Five or ten years from now, not only will California be famous world-wide as being the home of rotting teeth, but now we'll be also known as the home of the blind leading the blind. Now I ask you. What industry is going to want to relocate here? Not only will they have to pay bigtime for their employees' healthcare insurance plans, but said employees are also gonna be toothless and half-blind. And dumb as posts too -- because our legislators have also stopped adequately financing our schools. But don't get me started on that one.

Remember all those jokes that we Californians used to make about uneducated, near-sighted and toothless hillbillies living in less sophisticated states? Forget about that. Now WE are becoming America's new hillbillies. If our legislature has its way, the term "Beverly Hillbillies" is going to be taking on a whole new meaning. And while national healthcare insurance company CEOs will still be hanging out on Rodeo Drive, our famously well-paying Silicon Valley companies will have all moved to West Virginia -- where perspective employees might still have decent teeth.

Ironically, I just got an e-mail from my friend Doug -- and he's actually thinking of moving to Tennessee so that he can afford dental care. "I’m going to be looking at Polk County real estate on the internet this afternoon," wrote Doug. "Maybe I could sell my place here for enough to buy one there AND pay for the thousands of dollars worth of dental work that I need if I want to save my teeth. Supposedly because of my bone structure, I've been told that I won’t even be able to wear dentures if I lose these teeth. So its save these or eat soup the rest of my life – which actually wouldn't be so bad except for my appearance."
Posted by Jane Stillwater