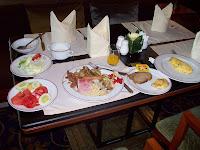 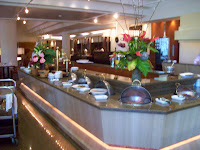 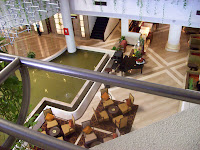 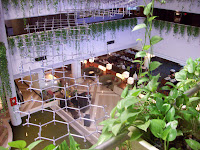 Business not as usual in Thailand: Hotels are only 10% occupied
(Photos are of empty hotels.)

I arrived in Thailand last night at 1:00 am and will leave for Burma this afternoon. My knees are holding up okay. They hurt. I walk on them anyway. What more can I say.

On the flight over, I talked with several people in the various airports about what happened when peaceful protesters took over the Bangkok International Airport last week. "The airlines were very helpful in finding us places to stay and the protesters were very nice," said one young father who was meeting his wife in Bangkok after she had been stranded there for two weeks. And the airport itself looked like nothing had happened there. It was all fresh and clean. And on the way to the hotel I discovered that Thailand, like almost every other country in the world, has our typical American Bechtel freeways -- put in with American loans. Green freeway signs.

That's what happens if you take out loans from Uncle Sam. Instead of being able to use that money to benefit your country, you get Bechtel shoved in your face. But I digress.

Anyway, I'm staying in a hotel in Bangkok, typing as fast as I can. And our guide said, "The hotels here in Thailand are only filled to 10% capacity -- and this is the height of the tourist season. It's sad."

And I talked with my friend Tony who lives here and he says, "The airport protest was totally peaceful and is a good example of democracy in action." So maybe the reason the hotels are so empty is because of Bush's recession. Ya think?