How many times have you been told straight-up lies to your face?  Been told them so many times that you actually start to believe them?  "Yes, Santa Claus will bring you lots of presents down the chimney, kid.  Now shut up and put out those damn cookies and milk."

I had that very same experience a few days ago -- right in front of the United Nations building in New York.  I saw a small group of people standing in front of the iconic UN building and waving a huge Syrian flag.  "Those are my kind of people!" I thought.  Having been to Syria and having kept up with all the lies we've been fed about their president being a bad guy, I was delighted to see protestors who were actually and finally bringing Truth to Power.  http://jpstillwater.blogspot.com/2014/06/not-another-article-on-syria-well-yeah.html

Boy was I wrong!

Those people were paid protestors, hired by Lord-Knows-Who to spread lies about Syria's President Assad.  "Assad is a baby-killer!"  They screamed.  Er, no.  Americans are the ones who have been murdering babies-for-oil in Syria since 2011, and in the whole Middle East for decades as well. 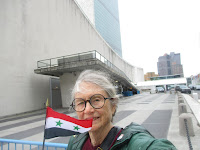 "But Assad is a hero in Syria!" I told them.  "They love him there -- because Assad has kept Syria from becoming another Libya."  But the protestors just shoved an obviously-Photo-Shopped leaflet in my hand and that was that.  How can I even begin to fight propaganda like that?  I mean -- seriously?  PhotoShop?  Me?  I can barely figure out how to turn off and on my computer let alone turn out professional-quality stuff like that.  This was CIA-quality stuff!

Sadly, I just shook my head and went back into the UN gift shop.  What else could I do?

I know!  I'll go over to the Syrian ambassador's office and try to cheer him up!  Good idea -- except the ambassador wasn't home.  But I did talk to one of his aides.  "I'm so sorry that Syria has to go through all this," I told him, "just because nobody here believes that this whole tragedy is simply a result of American corporations being greedy for yet more oil."  Yet again.  Remember when they lied like a rug to us about Iraq?
http://jpstillwater.blogspot.com/2014/06/press-release-un-blocks-syrian.html

And remember when Trump ordered the bombing of Damascus in retaliation to the Douma chemical attack, supposedly ordered by Assad?  Well, it turns out that America's "rebels" (aka al Qaeda) were the ones responsible, not Syria.  "I apologize on behalf of my country," I told the aide.  https://www.independent.co.uk/voices/douma-syria-opcw-chemical-weapons-chlorine-gas-video-conspiracy-theory-russia-a8927116.html

By this time I had tears in my eyes at the thought of all those dead Syrian babies -- murdered by us, not them.  And the aide almost had tears in his eyes too.  But what could we do?  For eight long bloody years now, Syria's ambassador has gotten up in front of United Nations delegates regularly and begged them to stop America, ISIS, Turkey, the Zionists and the Saudis from destroying his country -- looking like poor Haile Selassie back in 1936, futilely begging the League of Nations for help that would never come.  https://www.youtube.com/watch?v=oyX2kXeFUlo

Stop Wall Street and War Street from destroying our world.   And while you're at it, please buy my books.  https://www.amazon.com/Jane-Stillwater/e/B00IW6O1RM
Posted by Jane Stillwater at 2:25 PM