Ellis Island: Why it's even more relevant today 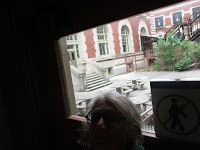 Only a tiny first part of this gigantic exhibit even causally mentioned that perhaps there might have been a few indigenous people who happened to live here before the settlers from Europe showed up and murdered most of them.  But then the extensive exhibit got down to brass tacks and began to tell us the story of how the real "Peopling" of America began -- once those pesky Indians had been shoved out of the way. https://www.barnesandnoble.com/w/an-american-genocide-benjamin-madley/1122747231#/

Since Columbus arrived, according to this exhibit, the "Peopling of America" had been a good thing.  Even all those poor tired unwashed non-English-speaking 19th-century immigrants yearning to breathe free who had landed on Ellis Island with their hearts in their throats had been a good thing -- even though the settlers already here clearly didn't think so.

But now, apparently, the "Peopling of America" is over.  According to Washington DC, I.C.E. and the U.S. Border Patrol, America has now become all "Peopled" up.  No more room at the inn.  No vacancy.  Sorry.  Go away.  Or die.

As far as I can tell, this is why the current Euro-centric "People" of America today seem to be so terribly afraid of our new immigrants -- that maybe karma really indeed is a bitch.  They're afraid that what goes around comes around.  That just as their ancestors had "Peopled" the American Indian to near extinction?  They are now afraid that their own Euro-centric arses are gonna also get "Peopled" to near extinction too by this next wave of immigrants from Latin America -- immigrants who are only following the trail of their stolen treasures back to the very thieves who stole them.  And that would be us.

And now we are seeing a whole new set of Ellis-Island clones springing up all along America's southern borders -- but these new ones are far more crueler and meaner and low-spirited than the original Ellis Island ever was.  Not just facilities for clearing new immigrants but actual concentration camps. 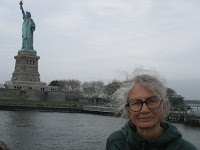 But it doesn't have to be this way.  Americans do not need to behave like Nazis.  It doesn't have to be "us verses them".  All humans are valuable.  Did not Jesus teach us that?  These asylum-seekers at our southern border need to be viewed as resources, as gifts -- not just another new wave of greedy settlers come to "People" over us too just like our murderous ancestors brutally "Peopled" over the American Indians back in the day.

Let's finally change history, make amends, welcome these new immigrants, start a new trend -- and do the courageous things now that our ancestors were too set on genocide to even consider.

PS:  I gotta admit that the Ellis Island cafeteria did serve an excellent old-fashioned roast beef dinner -- and it was cheap too. Plus the ferry ride over from lower Manhattan was totally fun.

Stop Wall Street and War Street from destroying our world.   And while you're at it, please buy my books.  https://www.amazon.com/Jane-Stillwater/e/B00IW6O1RM
Posted by Jane Stillwater at 9:46 AM