Here's something I didn't actually realize until I was actually inside of the National 9-11 museum in Lower Manhattan -- that this impressive new museum is actually built on the actual site of this dreadful catastrophe.  It's an extremely well-designed museum that will overpower your heart with sad emotions and make even the most veriest skeptic start to tear up.

But despite all its profound emotion-generating capabilities, the museum itself fails to answer my most basic question.  "Where is all the melted stuff?"

I saw battered stuff, broken stuff, blown up stuff, tragic stuff and awe-inspiringly heroic stuff -- but nothing that was actually melted.

We Americans have been told again and again and again that the burning fuel from the jet planes caused a whole bunch of six-inch-thick steel girders to melt from the heat, thus causing both towers to collapse.

Inside the museum, they showed us lots of steel girders.  They showed us lots of huge steel beams and lots of gigantic steel pillars.  And I looked very closely at each and every one of them.  No sign of melting at all.  Where was the wax-candle effect that we've been told about constantly for the last 19 years?  Coulda fooled me. 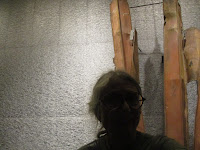 Maybe it was just me but the entire museum seemed to be designed and constructed to un-intentionally refute everything that we had been told for so long about all that melted steel.  The museum's exhibits themselves seemed to be working very hard to convince us that our leaders' national narrative about what happened on September 11, 2001 was only a construct, a mythology solely designed to drag America into 19 gruesome years of Endless War (so far) -- and thus fleece our pockets.  "Mission accomplished".

Surely I couldn't be the only one who happened to notice the extreme lack of melted stuff at this museum?  Apparently I am.

But with regard to our great sorrow for the victims of this terrible catastrophe that was generated by all the individual photos of the victims and by a Vietnam-memorial-style wall listing all of their names?  That was so tragically real.  We were all crying by the time we left the museum.  It had been clearly designed to create those sad emotions.  Deliberately mis-directing our anger away from reality and off into sadness?  You be the judge.  https://unac.notowar.net/2019/05/13/why-the-powerful-always-paint-their-side-as-the-victims/

But after having visited this museum, I now have no problem imagining the bottomless sorrow that millions of people in Afghanistan, Iraq, Syria, Yemen, Gaza, Libya, etc. must be feeling as well.  They too have suffered their own 9-11s, almost daily -- thanks to us.

PS:  How many and various false-flag "wars" have been shoved down our patriotic American throats over the years?  Let me count the ways.  "Remember the Maine."  And just who exactly really started that brutal war on Korea?  Huge lies about the Gulf of Tonkin incident?  Add that to the list.

Bin Laden in Afghanistan.  WMDs in Iraq.  Libya needed to be rescued for "Humanitarian Reasons" and now it too is a failed state.  "Rebels" in Syria who are actually al Qaeda operatives who get paid by the Saudis and weaponized by NATO.  Occupied Gaza sent firecrackers over the Zionist border -- which we are told were practically ICBM missiles and so Gaza must be taught a lesson by raining thousands of tons of white phosphorus down on its hospitals and schools.  Yemen's on fire because of...I forget what.  So Wall Street can sell more weapons to the Saudis?  "Duh, yeah."  https://www.globalresearch.ca/saudi-led-air-strikes-destroyed-nearly-400-hospitals-yemen/5679511

Most of us here in the USA are finally starting to realize (I hope) that American troops and resources are already stretched too thin.  Thousands of our troops are currently stationed next to Venezuela and inside Syria, Afghanistan and about 800 other places around the world, including our own southern border.  Geez Louise.  Exactly how many sons and daughter do we even have left to send off to "war" on Iran too?
https://www.realclearpolitics.com/video/2018/04/30/pat_buchanan_on_iran_bibi_has_been_crying_wolf_for_decades.html

Maybe it's time that we ourselves start protecting both our own sons and daughters and everybody else's sons and daughters from being victims of future 9-11s all over the world.  Because Wall Street and War Street sure aren't gonna do it for us.  Let's start by voting for pro-peace candidates like Tulsi Gabbard.  https://www.votetulsi.com/node/33249

Stop Wall Street and War Street from destroying our world.   And while you're at it, please buy my books.  https://www.amazon.com/Jane-Stillwater/e/B00IW6O1RM
Posted by Jane Stillwater at 2:16 PM