More thoughts on Ellis Island: Looking forward, not back...

After my recent visit to Ellis Island, I sometimes find myself actually starting to feel jealous of all those poor downtrodden immigrants coming to America -- both in days gone by and right now.  From yesterday's Ellis Island to today's southern border, these hopeful immigrants have all arrived here either by escaping from horrid 19th-century shtetls and 20th-century concentration camps in Europe, from that modern-day American-made nightmare in Honduras or from the squalid ICE-run concentration camps of Texas, Oklahoma or Mississippi.   https://www.commondreams.org/news/2019/06/12/sick-horror-trump-administration-plans-detain-migrant-children-former-japanese?cd-origin
Why?  Why should I envy them?  The poorest of the poor?  The very meekest on earth? 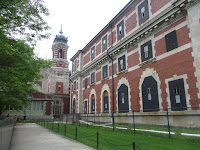 Why?  Because these poor, tattered and vulnerable immigrants living at the very bottom of humanity's social scale all possess something precious that the rest of us either don't have or have lost long ago:  A reason, a purpose, a destination for their lives -- and it's not just to buy the latest iPhone or to make the next trip to Walmart or to spend hours online hating on anyone who doesn't look exactly like them.  https://www.rollingstone.com/politics/politics-news/matthew-bowen-border-patrol-trial-847878/
These immigrants have true grit -- they are not just dogs in a manger, stuck in some rut where materialism is God, sucking up to their bosses, happily throwing the teaching of Jesus or even basic morality out the window if it causes even the slightest blister in their shoes -- souls filled with xenophobia, parroting every racist or corporatist lie they hear on TV, becoming mere dollar-store imitations of real men and women with actual beating hearts.
Like their European, Afghan, Iraqi, Libyan, Syrian, Palestinian, Yemeni, African and American Indian counterparts before them, these modern-day immigrants from Honduras have been forced the hard way to know what is true and what's not.  To quote the indomitable Mma Ramotswe, "They have a point to their lives."  What is our point?  We can only make Endless War for so long -- before the entire world falls apart.  Is that our point?  https://www.moonofalabama.org/2019/06/iran-decided-to-put-maximum-pressure-on-trump-here-is-how-it-will-do-it.html
Americans blindly look backwards to the imaginary wonderland of the 1950s, back when so many of us had been disingeniously rubber-stamped into an assembly-line conformity dominated by the Cold War and Joe McCarthy constantly telling us to "keep your mouth shut."
Immigrants from Honduras are on the move today, looking northward in search of the ideals of American "Democracy" and American "Freedom" that they have been constantly told about -- while most Americans who are already supposed to be living the dream are now all looking backward toward a dream that never was.  Looking back to the days when their financial security came at a very steep price -- the price of Freedom and Democracy.  "Keep your nose to the grindstone and your mouths shut."  https://www.zerohedge.com/news/2019-06-09/zuesse-force-ending-freedom
Americans have come to believe their own myths.  Instead of the truth.  This is never a good thing.
But now it's time for us too, like the Hondurans and all the other immigrants to America before them, to throw everything that we can, especially "our lives our fortunes and our sacred honor," into also seeking true democracy.  True freedom.  Can Hondurans find this heroic Declaration of Independence hidden away in some American concentration camp on our southern border?  Maybe.  Can we ourselves find it in Washington DC or at Walmart?  Definitely not.  https://www.youtube.com/watch?v=BMYjroVIDLA 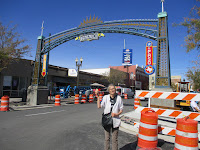 Americans can never ever experience a true democracy or live in true freedom -- not in a country where we have concentration camps at our southern borders, where any kind of planned parenthood is not allowed, where we are constantly being mugged and frisked by the new income tax laws, where voter suppression is rampant, where we go into individual bankruptcy because we believe that TV commercials are more important than the Eye of a Needle and into national bankruptcy because our imperialistic military machine is stretched too thin because all our savings, and future hopes and dreams are swallowed up by Death Eaters waging "Endless War" and where we all know for sure that the NSA is reading our mail.  https://www.thenation.com/article/amy-kaplan-our-american-israel-book-review/
Both our Honduran asylum-seekers of today and the ghosts of our Ellis Island survivors back in the day have one thing in common.  They have nothing to lose -- and yet they still have hope.  I'm so jealous of that.  But we Americans?  We have already lost all that -- and yet we don't even know that it's gone.
__________________________________________

Stop Wall Street and War Street from destroying our world.   And while you're at it, please buy my books.  https://www.amazon.com/Jane-Stillwater/e/B00IW6O1RM
Posted by Jane Stillwater at 11:36 AM