Gone Girls: The American South's next Great Migration
Who knew that America's Red States would stay so doggedly attached to their jankity old Jim Crow laws?  "Nothing to see here, folks.  Time to move on."  But apparently that's never gonna happen below the Mason-Dixon line.  That petty sort of retro mentality should have ended for good after the Great Migration left much of the South without skilled labor and the freedom struggles of the 1960s Civil Rights Movement gave Blacks in the Deep South the courage to stand up for their own rights, right?  "No more Jim Crow for us!" they cried.  https://www.penguinrandomhouse.com/books/190696/the-warmth-of-other-suns-by-isabel-wilkerson/9780679763888/

But apparently Jim Crow isn't dead in the Ol' South quite yet. 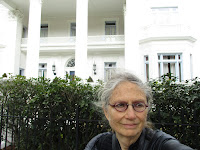 Apparently Southern radicals just couldn't bear to leave it like that.  "What would Jesus do?  He'd look around for another vulnerable group to oppress!" their pastors shouted heretically from the pulpit.  And Southern Man, bless his heart, became so bereft of people to look down his nose at that he started searching for yet another defenseless group of victims to feel superior to, stereotype and abuse.  https://slate.com/news-and-politics/2019/05/alabama-abortion-ban-disaster-for-republicans.html

It used to be Black people at the very bottom rung of the socio-economic ladder south of the Mason-Dixon line -- but now the new Untouchables in the Cotton Belt are...wait for it...women!

And so now another Great Migration has also begun in the American South.  Southern Belles by the hundreds are currently packing up their hoop skirts and contraceptives and moving up to the Blue States.

Pretty soon the new Alabama will become like the new China -- resembling those parts of the Flowery Kingdom today where the ratio of men to women is 100 to one, and Chinese wannabee grooms are being forced to buy brides from Thailand, Myanmar and Pakistan.  What?  Southern men are soon going to be forced to import their brides from Honduras?

Pretty soon we are going to discover that Southern female asylum-seekers have absolutely flooded New York and Chicago.  And California will once again become known as a Sanctuary State -- but this time for giving refuge to fleeing Steel Magnolias.  And Alabama will have to beg President Trump to build them a Wall too -- just to keep their Crimson-Tide ladies from rolling away.

Stop Wall Street and War Street from destroying our world.   And while you're at it, please buy my books.  https://www.amazon.com/Jane-Stillwater/e/B00IW6O1RM
Posted by Jane Stillwater at 5:25 PM