Morgan Library & Hudson Yards: Two NYC landmarks built off the misery of others 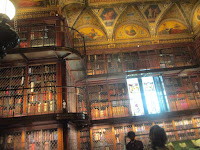 I clearly love everything about books -- so imagine my delight when someone told me about the historic Morgan Library in midtown Manhattan.  I was there in a flash.  And it was awesomely beautiful too.  Just imagine a vaulted sanctuary such as Michelangelo's Sistine Chapel -- only also lined with tiers and tiers of bookcases stuffed with rare and beautiful leather-bound books containing all the wisdom of the ages.  "A thing of beauty is a joy forever."  I was in hog heaven!  https://www.themorgan.org/

At the very back of my consciousness, I kept hearing a niggling small voice that kept telling me, "You know, of course, that all this fabulous splendor was built upon the backs of the misery, starvation and death of thousands of 19th-century American workers who were impoverished and practically enslaved by J.P. Morgan, the Robber Baron himself, right?"

"Oh shut up Jiminy Cricket and just let me enjoy the moment."  But my conscience just wouldn't shut up.

Another one of the many other fabulous things to do in New York City is to walk the High Line, an amazing park-in-the-sky lovingly created by local volunteers who have turned some old elevated train tracks into a tree-lined pathway from 14th Street up to 34th Street.  I went there next.  Trees are beautiful too, right?  https://www.thehighline.org/visit/ 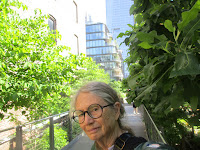 At the end of the High Line I also discovered the luxurious Hudson Yards office-complex-and-mall.  Another thing of great beauty.  And the "Stores at the Yard" were all selling beautiful high-end stuff like Chanel, Cartier, Rolex, Louis Vuitton, Tiffany, Gucci, Coach and Dior.  Who the freak can even afford to buy stuff like that?  Certainly not me.  I shop at free boxes, flea markets and the Goodwill.  But somebody must be doing their shopping there.  I couldn't even imagine who.

And another thing about the Hudson Yards that just screamed out "Conspicuous Consumption" was the huge amounts of wasted space there.  Atriums and terraces and vaulted corridors were everywhere, right there on prime-time mid-Manhattan real estate -- real estate worth hundreds of dollars a foot.  Real estate that could have housed hundreds if not thousands of tents for the myriad homeless families of New York.

Jiminy Cricket then went on to underscore his point.  "Back in the 19th century, robber barons like Morgan and Rockefeller and Carnegie created their castles of dreams on the backs of starving and dying American workers like our great-grandfathers.  And now it is clear that, here in the 21st century, there is a whole new set of robber barons who are creating all this insane wealth as well -- only this time these castles of dreams like the Hudson Yards are being created over the dead bodies of murdered babies in Latin America, Asia, Africa and the Middle East."  http://static1.squarespace.com/static/5c2f801b9772ae6d89f7eb45/t/5cf63af897a71f00013ca94b/1559640825016/Update_Peter+Ford_4+June+2019.pdf

Yep, my conscience is right.   What good is awesome and extreme beauty if its very roots lie in the extreme swamps of inhuman heartlessness and greed?  The one cancels out the other.  How can anyone with any good conscience at all shop at the Hudson Yards, knowing that their extreme wealth mostly derives from manufacturing and selling deadly weapons of mass destruction -- to be used to massacre babies in far-away places like Yemen and Gaza and Syria and Iraq?  How can these people even sleep at night?  https://www.globalresearch.ca/saudi-led-air-strikes-destroyed-nearly-400-hospitals-yemen/5679511

And how can we Americans continue to let them?

To quote Dwight D. Eisenhower, "A people that values its privileges above its principles soon loses both."  Let's do whatever we can to stop our leaders from continuing to trudge down their current sad, immoral and decadent path to a beautiful future for them -- at the price of a living Hell for the rest of us.

Stop Wall Street and War Street from destroying our world.   And while you're at it, please buy my books.  https://www.amazon.com/Jane-Stillwater/e/B00IW6O1RM
Posted by Jane Stillwater at 11:08 AM