I was mindlessly channel-surfing through a bunch of TV stations the other day when suddenly there was this rabid televangelist sternly haranguing me about the holy sanctity of life before birth and also the holy sanctity of life once we get too old to do anything else but just lie around in a coma.  "Abortions and do-not-resuscitate directives are anathema," he screamed at me.  But all the rest of us between birth and the ICU are fair game?  Apparently so.

Drop bombs on us, ambush us on school playgrounds, make our food radioactive, drown us with floods and tornadoes and sea-level rises, drive our veterans to mass suicide, frack our water supply, starve our children, deprive us of life-saving healthcare -- hey, that's okay.  Just as long as nonviable fetuses and comatose elders are safe.

Why do so many Americans think like that today?  That the teachings of Jesus strictly apply to the unborn and the undead -- but not to the rest of us?

And while we still are on this unpleasant topic, let's also talk about the word "abortion".  That is such an ugly and heartless word.  Let's give it another, kinder, gentler, more humane name.  Let's call it "Reproductive Freedom" instead. 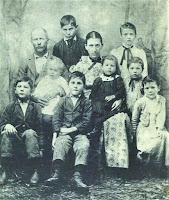 For my grandmother's generation, there was no reproductive freedom at all.  No choices other than a diaphragm or a condom, both of which were hard to get.  Or a coat hanger.  Or being forced to raise a dozen unwanted children and then finally die in childbirth.  Or die trying to avoid it.  "Keep them barefoot and pregnant."  My grandmother herself ended up having a "nervous breakdown" after her husband died in a flash flood and she was left with three young children to raise in poverty all by herself.

And also there's the sad case of my great-grandmother who had given birth to ten children by the age of 36.  I have a photograph of her and eight of her kids (more to come, unfortunately).  And she already looks like hell, frankly -- a haunted and scary hell.  Old beyond her years.  No facelifts for her!


I myself had never planned to have children.  After graduating from college, I went into the Peace Corps and then planned to attend graduate school after that.  But with no easy access to birth control....  "Life is what happens to you while you're busy making other plans."  https://www.youtube.com/watch?v=_hKSXqefccg

But that was then.  Not now.  Yet.  Back to the future.  Let's take a closer look at all those present-day guys who are working so hard to eliminate reproductive freedom for women -- men like the above-named televangelist.  Those very same guys who fight so hard to protect their own freedoms?  Freedom to use our beloved flag as an excuse to throw helpless babies into concentration camps?  Freedom to demand open-carry of semi-automatic weapons?  Freedom to get all pissed off if they might be deprived of their right to bomb Iran and start World War 3?  https://thehill.com/homenews/state-watch/448248-texas-city-council-unanimously-votes-to-ban-abortions-become-first

And yet these very same grumpy old men are absolutely the first ones to deny us women of our own right to freedom.  "No reproductive freedom for you!"  They want all us women to look like my great-grandmother -- before we even reach age 40?  So they can have the freedom to dump us and go hunt for a new trophy wife?

We women should be in open revolt regarding our future (and present) loss of Reproductive Freedom.  Ladies, let's not end up like our grandmothers!  And let's fight for our daughters while we're at it too.

PS:  I will be visiting Philadelphia from July 9 to July 16.  What the freak does one do in the City of Brotherly Love besides touring the Liberty Bell?  Did W.C. Fields get it right?  "On the whole, I'd rather be in Philadelphia."  And  I'll also be attending the annual Netroots Nation convention there and staying in a fourth-floor walk-up in Chinatown.  That will be a hecka lot of stairs.  I hate stairs.  https://www.netrootsnation.org/about/

I'm sincerely hoping that my favorite presidential candidates will all be speaking at the convention -- just to make W.C. Fields jealous.  Tulsi Gabbard is my favorite candidate. She is totally pro-peace and would make a great soldier-president.  The prez we have now avoided the draft.  Tulsi served her country and is still serving in the National Guard.  https://www.tulsi2020.com/about

And speaking of presidents and changing the tropes that we call stuff by, I.C.E's ghastly holding pens for babies and children at our southern border have gone far beyond just labeling them "concentration camps" -- and even past calling them "Gulags".  No, it's gone beyond that.  We can now officially call it "Genocide".  According to the UN Genocide Convention, "When one group forcibly transfers the children of one group to another group" and/or practices "institutionalized neglect," that group is deliberately committing genocide.  https://www.eater.com/2019/6/28/19154181/migrant-children-detention-centers-border-texas-food-water

It's time to stop all this horror.  Americans need to stop acting like Nazis -- where only the unborn are safe....  https://www.businessinsider.com/detained-kids-could-live-in-trump-hotel-suite-for-less-than-tent-city-2018-6

Stop Wall Street and War Street from destroying our world.   And while you're at it, please buy my books.  https://www.amazon.com/Jane-Stillwater/e/B00IW6O1RM
Posted by Jane Stillwater at 12:28 PM