The other Philadelphia: My trip to Freddie and Tony's

There was so much to see and do in Philadelphia.  Who knew?  I stayed in a fourth-floor walk-up in Chinatown and ate beef chow fun at M-Kee, an old-school hole-in-the-wall straight outta Shanghai.  Then there was Mueller's Amish bakery for dessert (no, not that Mueller) at the Reading Market.  They surely don't skimp on the sugar.  https://www.yelp.com/biz/m-kee-philadelphia 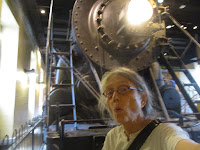 There is a science museum in Philadelphia with a planetarium and an old locomotive train as big as a house -- or even bigger.  350 tons of cast iron, looking pretty much like Darth Vader. I took a whole bunch of photos of it because I couldn't even believe it was real!  After avoiding a whole bunch of food trucks selling cheese steaks, I visited Philly's fancy wedding-cake and rococo City Hall next.  You gotta see it to believe it.  https://www.fi.edu/exhibit/train-factory

What should I do next?  WWBFD?  What would Benjamin Franklin do?  Wander over to the Historic District, of course.  I even splurged and bought a T-shirt at the Independence Hall gift shop that had a picture of Washington, Jefferson, Franklin and Hamilton crossing Abby Road and singing, "We all want a Revolution...."  So appropriate for today -- although I would be willing to settle for just a Green New Deal.  And perhaps an impeachment or two.  Oh, and fair elections that haven't been gerrymandered and tampered with by the Repubs, Google, FaceBook, the DNC, the Saudis and AIPAC. https://www.strategic-culture.org/news/2019/08/02/empire-coming-for-tulsi-gabbard/ 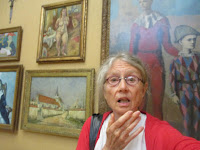 But the jewel in the crown of downtown Philly was definitely the Barnes Foundation -- where they are sitting on at least a billion dollars worth of French Impressionist paintings.  My jaw just dropped.  Dropped!  One gallery alone contained a Picasso, several Monets, a few Cezannes, several Van Goghs, a Modigliani and two or three Degas.  And that was just one gallery out of twenty.  Apparently this Barnes guy got on the band-wagon early and was able to buy up all these paintings for cheap.  Wish that had been me.  https://www.barnesfoundation.org/whats-on/collection

And then things got real.  I took the #23 bus out to North Philly and then transferred to the #60 bus for another two miles.  Why?  Because I had just finished reading Elizabeth Acevedo's latest novel and she had mentioned at Puerto Rican restaurant named "Freddie and Tony".  Solidarity with Puerto Rico!  At least they have the cajones down there to actually stage a revolution when things get too corrupt.  http://www.acevedowrites.com/about

The bus ride was worth it.  While the pork chops were a bit over-cooked, the homemade flan was dreamy.  And I also got to take a look at the Other Philly -- home of closed schools, used-tire lots, food stamps, dollar stores, high unemployment, homelessness and broken-down cars.  Not exactly the type of place you would go in the "Pursuit of Happiness" but folks in North Philly made do.  Good for them.

Downtown Philadelphia was beautiful, wonderful and historic as hell.  North Philly just looked like the rest of America -- just trying to get by.

It's time for us all to follow the example of Jefferson, Franklin, Hamilton, Washington -- and Puerto Rico -- and also demand an end to corruption in our current federal government as well.

Stop Wall Street and War Street from destroying our world.   And while you're at it, please buy my books.  https://www.amazon.com/Jane-Stillwater/e/B00IW6O1RM
Posted by Jane Stillwater at 5:03 PM