Philadelphia: Walking over the graves of American history

Recently 5,000 delegates from all over America attended a Netroots Nation convention in Philadelphia -- and one of those delegates was me.  And the proudest moment of that entire convention was when all 5,000 of us took to the streets and marched on City Hall to protest the fact that Honduran babies and little kids were being kept in cages like criminals -- not only at our southern borders but also even right here at Philadelphia's Berks Detention Center -- right in the beating heart of the City of Brotherly Love.

Remember back several years ago when football player Michael Vick became a national villain when he was accused of being mean to dogs and keeping them in cages?  Nation-wide outcry!  "Vick is mean to dogs!"

But now, when our very own government goes about caging human children, where is the outcry?  Vick is a villain -- and yet Trump is a hero?  Vick cages 50 dogs and get punished for it -- but Trump cages thousands of children and gets completely away with it?  Say what? 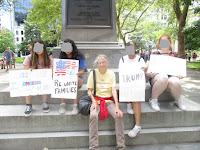 After the protest march, I trudged off through the streets of Philly, just soaking in the ambiance of all that historic "Cradle of Freedom" stuff.  At Independence Hall, I met up with my guide for a walking tour of where Black history also took place back during Revolutionary times -- and right there in the very center of the Cradle of Liberty itself, our tour group stumbled upon a sweet, idealistic and hopeful group of young middle-school girls, standing next to the very place where John Hancock had signed the Declaration of Independence.  And these girls were holding up signs protesting the caging of children in America today.

My first thought at seeing those signs was, "Geez Louise, America has really degenerated from fighting for Philadelphia Freedom in 1776 to behaving like Nazis in 2019."

But by the time the Black History tour ended, I sadly realized that America had always kept kids in cages.  This current atrocity of keeping kids in cages was actually nothing new.  Our heroic ancestors had caged Black children first.

Then our guide took us off to see a statue of Robert Morris, the man who almost single-handedly financed the American Revolution.  "He got his wealth by kidnapping people from Africa, submitting them to the horrors of the Middle Passage and then selling them on the auction block here."  And Morris treated Black children even worse than Michael Vick treated his dogs.  Much worse.

So I wrote the word "Slaver!" on a Post-it note and pasted it onto the base of Morris's statue, telling the whole world the truth about him.  But then someone told me that there were cameras all over that area, spying on us tourists -- so I went back and took the Post-it note down.  So much for freedom of speech anywhere near Independence Hall.

Next our tour group moved off to Washington Park.  "5,000 slaves died in Philadelphia during the infamous yellow fever epidemic of 1793.  Many of them are buried right here.  In unmarked graves.  You are standing on them right now."

PS:  I just read where one Honduran mother had been finally reunited with her 14-month-old baby after 85 days, only to discover that her infant was covered with -- wait for it -- lice!  Yuck.  https://www.huffpost.com/entry/migrant-baby-returned-to-mom-covered-with-lice-lawsuit_n_5b401388e4b07b827cc07d3c

What kind of sick storm-trooper mentality allows those in charge of such hellholes as slave markets, Dachau, Abu Graib, Gaza and America's southern border to even begin to think that their behavior is acceptable?

It's the herd mentality.

"If the guy next to me is happily kidnapping babies, then it must be okay for me to also kidnap babies too."  Just google the "Stanford Prison Experiment" to see how that works -- or never mind.  I've googled it for you.  https://www.psychologistworld.com/influence-personality/stanford-prison-experiment

Let's get this straight.  No matter what kind of weird shite the guy next to you is up to, it is never okay to be a mean sadistic bastard.  History has proved this time and again.  So.  Let's stop all this criminal inhumane madness.  Stop it now.  Or else history will be walking over our graves as well.

Stop Wall Street and War Street from destroying our world.   And while you're at it, please buy my books.  https://www.amazon.com/Jane-Stillwater/e/B00IW6O1RM
Posted by Jane Stillwater at 12:52 PM