Is justice still alive in America? According to the American Bar Association? Yes

At a reception for the Criminal Justice Section of the ABA held high above San Francisco on the thirty-third floor of the Hotel Nikko over crab cakes and Jack Daniel's, I posed this very important question to a young criminal-prosecution attorney.  "Is justice actually being done in America today?"

After a long pause, he replied thoughtfully, "Yes, I would think so."  Please let us hope that he's right!

At a panel discussion earlier that day regarding recent Supreme Court decisions, however, the answer was sort of different.  "Our justices' decisions in the past were based on the issues.  Judging at the Supreme Court level today is pretty much trench warfare.  Supreme Court cases today are actually proxy wars against something else." 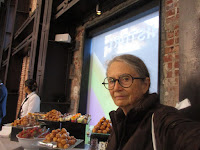 The two main take-aways I got after attending 15 or 20 different seminars at this convention were that U.S. attorneys love to eat well -- and also that even though President Trump seems to be a walking, talking Ken-doll-wannabe sociopath (who stole his election with the help of Republicans, Zionists, Saudis, gerrymandering, fraudulent voter exclusions, an unbalanced electoral college and rigged voting machines) and Attorney General Barr is a judicial joke, there are still some good people out there in America today, still fighting for justice.

PS:  One of the most heart-rending seminars I attended was presented by the ABA Commission on Homelessness and Poverty, wherein a panel of experts discussed the all-too-common horrors of the sex-trafficking of children.  Here in America, it is much more common than you think.  Jeffery Epstein isn't the only one doing it.  Hundreds of thousands of young girls (and boys) are being bought and sold every day into sex slavery.  What will become of these children?

What will be come of America's youth?

And what has become of America's morals?

Who buys these kids?  Who has the moral degeneracy to purchase children for sex?  What kind of sick America is this?

Conscienceless white males have really screwed with America's morals.  Maybe people of conscience could do better?  They surely couldn't do any worse!  https://www.theamericanconservative.com/articles/tulsi-gabbards-road-to-damascus/

Hell, even I could do better.

Stop Wall Street and War Street from destroying our world.   And while you're at it, please buy my books.  https://www.amazon.com/Jane-Stillwater/e/B00IW6O1RM
Posted by Jane Stillwater at 12:43 PM