At the recent American Bar Association annual convention in San Francisco, I managed to come up with several burning questions.  For instance, why are they serving us giant pretzels?  It's San Francisco, for crying out loud.  Shouldn't we be getting crab salad and sourdough instead?

And my next burning question?  "If Japanese-Americans were incarcerated illegally because they were accused of being a threat to national security, then how come that threat was never proven?"

According to an ABA panel that spoke on this subject the other day, the answer is, "Hell, no!"  A threat was never proven and, in fact, what was proven later was that our government had actually even doctored the evidence.  Even that freak J. Edgar Hoover said that Japanese-Americans never posed a threat to America.

So.  Next burning question.  "Do the Honduran refugees who are legally seeking asylum at our southern borders actually pose a threat to America's national security -- or is this just another trumped-up charge?"  I think that asylum seekers are getting a bum rap.  And apparently the ABA thinks so too.

Who in their right mind can possibly prove that two-month-old babies are a clear-and-present danger to America's national security?  Nobody can. 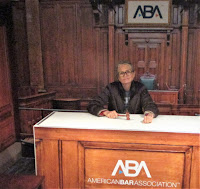 But if two-month-old babies actually do pose such a huge threat to America's national security, then why the freak is our government spending 800 billion dollars a year on nuclear weapons, tanks and killer drones to defend us against babies?  Get real.  Shouldn't they be spending all that money on diapers and cradles instead?

Another interesting thing that I learned from this ABA panel was with regard to the Rule of Law.  "The Rule of Law isn't as important than the content of that Rule."  Nazi Germany was famous for its extensive Rule of Law.  GWB followed his own Rule of Law.  Obama and Clinton instigated NATO's phony "humanitarian" Rule of Law in their illegal invasions of Syria and Libya and just look where that got us.  And Donald Trump's so-called Rule of Law?  Yeah, right.  I rest my case!  https://unac.notowar.net/2019/08/09/another-perspective-on-middle-east-peace/

PS:  The Themis Bar Review gave out some really awesome free ballpoint, pens, the bar association's Criminal Justice Section hosted an excellent buffet and the ABA itself scored us tickets to a Giants vs. Phillies game!

Stop Wall Street and War Street from destroying our world.   And while you're at it, please buy my books.  https://www.amazon.com/Jane-Stillwater/e/B00IW6O1RM
Posted by Jane Stillwater at 4:26 PM