Real patriotism: Taking a knee at the ABA convention

While commuting back and forth to the recent American Bar Association convention in San Francisco, I dragged along Seth Rosenfeld's 600-page tome, Subversives, so that I would have something to read on BART during the commute.

Rosenfeld spent years and years in court trying to force the FBI to surrender more than 250,000 pages of documents chronicling J. Edgar Hoover's personal and highly illegal war on everyone in America who dared to think differently than him.  What Hoover did back then was totally un-American and disgusting.  And yet even today most of us are still brainwashed enough to allow the FBI building in Washington DC to continue to be named after this abdominal man.

Sidebar:  Please sign my petition to rename the FBI building.  Rename it for who?  I don't care.  Just pick a name.  Any honest and moral person in Washington will do -- if you can find one!  Here's the link to my petition:  http://chng.it/hQNbKVg8

America continues to honor that crook J. Edgar Hoover -- yet no one will give a job to Colin Kaepernick?  That's just fracked up!

So when an honor guard presented the colors at the ABA's final assembly of delegates and Robert Simms sang the national anthem, I too took a knee.  Hey, you should try it sometime.  Nothing I have done in this world makes me feel more patriotic -- than when I am  humbly down on one knee expressing my god-given right to dissent.

J. Edgar Hoover would have hated me.

ABA members, however, seemed to think I was doing the right thing -- even if no one else joined me.  It was that kind of convention.  Lots of diversity.

More highlights from the convention:  Did you know that cannabinoids are being legalized federally through a farm bill?  Seems that farmers all want to grow hemp now that soy products can no longer be profitably sold to China.  Even though Trump is eliminating tariffs on Apple products made in China, he's still willing to screw both America's farmers and the fan club who voted for him.  https://www.youtube.com/watch?v=6zhUJE7heU8&feature=youtu.be 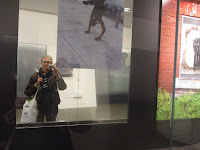 I also learned that the concept of judicial review is not written into the Constitution.  And also that "If we want true justice, we need to make sure that everyone receives equal justice."  So true.  And we were also reminded of what Justice Sotomayor said about being diplomatic.  At the end of the day, she still has to work with the other eight justices at least 40 hours a week -- so they all do need to be polite to each other.  Americans also need to learn not to [poop] in their own nests as well.  And, like it or not, in these intense times of horrific war-mongering and terrifying climate-change escalation, the entire world is now our nest.

The Chief Justice for our heroic Ninth Circuit federal court also spoke.  The Ninth Circuit is famous for holding out in favor of justice over politics.  No judge on the court dares to retire for fear that he or she will be replaced by one of the Koch brothers' flying monkeys.  "Justice is not a spectator sport."

At another panel, attorneys talked bout Trump v. Hawaii.  "The courts must hold the government's feet to the fire -- even with regard to national security."  The Nazis were held accountable at Nuremberg.  Americans should be held accountable too.  "In times of crisis people may say, 'Oh this is different' -- but it is not."

Tell that to J. Edgar Hoover's evil ghost!  And take his damn name off the FBI building in DC while you're at it too.

PS:  The ABA President's Reception was held at the Contemporary Jewish Museum -- which had an exhibit called "Dark Matter," extolling the virtues of Black America's street culture.  Ha!  Tell that to the Palestinians whose "Street Culture" is being systematically murdered back in ZionistLand.

But the rest of the museum was nice.  And it would be unjust of me to equate Jews with Zionists.  Jews honor justice.  Zionists honor...not sure if they honor anything at all.  No wonder Trump and Netanyahu get along so well.  They both take a knee to self-aggrandizement.

PPS:  Many people compare Donald Trump to Adolph Hitler.  Same rhetorical style, same appeal to his minions' base immorality.  But I myself compare Trump to Herbert Hoover (as well as J. Edgar) because of Trump's arse-kissing attitude toward the rapacious global elite and also because of his "Let them eat cake" attitude toward America's salt of the earth in the face of our upcoming Great Depression II.  https://www.youtube.com/watch?v=6zhUJE7heU8&feature=youtu.be

Stop Wall Street and War Street from destroying our world.   And while you're at it, please buy my books.  https://www.amazon.com/Jane-Stillwater/e/B00IW6O1RM
Posted by Jane Stillwater at 1:31 PM