American morality: It's about more than just saving fetuses, guys

Books bring such pleasure into my life.  While reading, I get to spend major time with some of the greatest human beings who ever lived -- hours and hours with them.  I love books!

But sometimes what these great authors have to say isn't always so pleasant.

Currently I'm reading a book written back in 2005 -- but it could easily have been written today.  What's the Matter with Kansas, by Thomas Frank.  Absolutely nothing has changed in America since 2005.  The average American is still trying to do the moral thing -- and Wall Street and War Street have still managed to convince him or her that the truly moral thing to do is to hand over all our power and all our money to the global super-elites.  That's just weird.  Are Americans still that gullible and masochistic?  Apparently so.

The author says that the average voter in America in 2005 cared more about eliminating women's reproductive choices than about healthcare, jobs, education or even life itself -- just as long as there are no more safe abortions.  And Americans still think that way.  Would I myself vote for some guy who only promises to halt legal abortions -- even if it means that I would die tomorrow of starvation, homelessness or lack of healthcare?  Hmmm.  No-brainer!  I love food and a comfortable bed far too much!

But what happens to a fetus after it's born?  "Hey, that's someone else's problem." 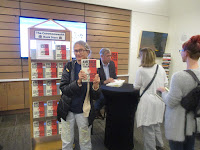 I'm also reading another book that was just recently published.  America is better than this: Trump's War Against Immigrant Families.  Its author, U.S. Senator Jeff Merkley, painstakingly details many of the horrors inflicted on kids kept in freezing-cold cages at our southern border.  "Inflicting trauma on children has become a political strategy."  https://www.twelvebooks.com/titles/jeff-merkley/america-is-better-than-this/9781538734186/

Americans are saving fetuses?  And then imprisoning, raping, endangering, traumatizing and torturing children?  Seriously?  Where's the disconnect here, America?  What is missing in America's morality?

It's like going to church twice a week but ignoring everything that Jesus teaches us.

It's like protecting embryos in their mothers' wombs but setting the Devil loose on them after they are born.

PS:  I just heard Senator Merkley give a talk about his new book -- and he also signed my copy personally!  Now here is a man who has his moral priorities straight.  I highly recommend his book.  And reading it is probably the only way that I'm going to be able to spend several hours with a U.S. Senator too.

I don't think I'll be reading Mitch McConnell's book any time soon, however.  I can already imagine what it would be about.  "I screwed the Senate.  I screwed the American people.  And I made a whole pile of money doing it too!  God bless Jesus and amen."

Posted by Jane Stillwater at 4:21 PM