After arriving at the Beirut airport on my way to Damascus for a conference of union representatives, I myself personally experienced just how much the Lebanese people totally hate and resent the presence of those pesky Zionists hovering around their southern border, always up to no good.  https://syrianobserver.com/EN/news/28951/international_trade_union_conference_kicks_in_damascus.html

"We've beaten them twice already -- and we can do it again," said the Lebanese guy standing behind me in line while we waited to go through passport control.  "They want to attack Iran?  Ha!  They can't even beat Lebanon!"  And that is so true.

After the Zionists sent a suicide drone to bomb Beirut recently, the Lebanese immediately did that eye-for-an-eye thing and returned fire on an Israeli military base.  "But the Israeli soldiers had all run away in fear!"  But I digress.  Let's get back to my passport-control story.

"You've got an Israeli stamp in your passport!" the Lebanese TSA guy exclaimed -- and then started looking at me like I was some sort of Mossad agent.

"No, wait," I replied.  "It says 'entry denied' on top of that first stamp.  See that second stamp?  I was banned from entering ZionistLand.  Honest!"  http://jpstillwater.blogspot.com/2017/09/grilled-my-experience-at-israeli-border.html

"But you are an American citizen.  They are required by law to let you in."  One would think so -- after all the billions of dollars that American taxpayers donate to the Israeli killing machine very year.  But, no.  Didn't happen.  They'd stopped me at the border on my way to Bethlehem.  Rumor has it that Jesus had not been pleased.

After that, we drove off to Damascus and got stored in a four-star hotel until the conference here began.  And the next day I toured Old Damascus.  Narrow streets, friendly people, families out for a stroll in the warm night air -- eating pizza by the slice. 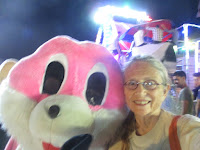 And then I went off to a huge exhibition at the Damascus fairgrounds, attended by thousands of Syrians.  A grand affair.  Families and teenagers and cute little babies.  Bouncy houses.  Carnival rides.  Exhibits.  Even horses.  I entered a dance-off competition -- and almost won!  If I do say so myself, I can do a mean twerk.  But then some hip-hop dude beat me.  Humph.

What's my point here?  It's as if all of Syria had been holding its breath for eight long miserable years.  Would President Assad protect them from the al Qaeda/ISIS "rebel" hordes?  Or would America's "humanitarian" coalition turn Syria into yet another sci-fi wasteland like Libya?

But here in Damascus, on this wonderfully warm late-summer night, it was as if all of Syria was friendly and happy and celebrating with joy that Syrians were now safe to walk in the street at night and go to school and hold down jobs and just be normal again.  "Good job, President Assad."

PS:  The high cost of the American-slash-Zionist-slash-Saudi illegal invasion was brought graphically home to me at a border station between Lebanon and Syria.  A middle-class-looking couple entered the building, looking to get their passports stamped so they could finally return safely to their home in Syria.  A mother, a father, a nine-year-old daughter and a cute little six-month old baby.  Perfectly normal, right?  Wrong.

The nine-year-old held her baby sister and looked down at the baby with a loving look on her face -- what was left of her face that is.  A lot of her face had been chewed off by napalm or white phosphorus, including most of her nose.

And which countries that we know of routinely go around bombing children with white phosphorus?  Suddenly I was ashamed to be an American.  You would be too.

This young girl, almost my own granddaughter's age, was trying very hard to be normal, a struggle that she would have for the rest of her life.  America, is creating all this horror really worth it?  Is oil all that important to the powers-that-be who now own our country?  Obama?  Bush?  Trump?  What if that had been one of your daughters instead?

PPS:  Geez Louise, how did all this horrible murder and slaughter happen to Syria the first place?  To the point where America actually hired al Qaeda and ISIS to bring "Democracy" to the Middle East?  Let me tell you.  In a word.  Propaganda.  We have all been seriously duped. https://www.claritypress.com/product/axis-of-resistance-towards-an-independent-middle-east-2/ 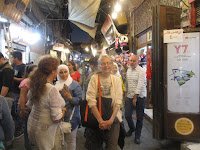 Case in point?  The Economist.  Revered source of intellectual provenance, right?  The Economist would never lie to us, right?  And yet here is just one more torrid example of yellow journalism, taken straight from their website:  "True to his slogan, [President Assad] destroyed whole cities and gassed and starved his own people.  What rebels remain are holed up in Idlib province.  It, too, will soon fall.  Against all the odds, the monster has won."

Uh, no.  President Assad didn't gas or starve anybody.  Americans, Zionists, Saudis and their proxy "rebels" aka ISIS and al Qaeda did all that.  Monster?  Tell that to the hundreds of Syrians I just walked among as they celebrated life at a wonderful family fair in Damascus.  The Economist would have a really hard time telling these Syrian front-row eye-witnesses  that their president is a monster.

Stop Wall Street and War Street from destroying our world.   And while you're at it, please buy my books.  https://www.amazon.com/Jane-Stillwater/e/B00IW6O1RM
Posted by Jane Stillwater at 4:30 PM