In the entire history of the whole wide world, has any other country (besides the good old USA) ever before had the cruel and cold heartlessness to drag hundreds of sweet little human babies off to jail?  What would Diana Ross have to say about this?  "Think it ov-v-er..."  https://www.youtube.com/watch?v=NPBkiBbO4_4

Has America just reached a new world-record low?  But -- oh -- no -- wait.  Not exactly.  The Nazis already did that.  And didn't some slavers on the Ivory Coast do it too?  Does America really want to be in the same class as, say, Josef Stalin or Pol Pot or that Saudi Arabia guy who is always murdering Yemeni children for fun and profit?  Or those evil Zionists who threw young Ahed Tamimi in jail?  Apparently so.  https://www.globalresearch.ca/americas-assault-against-yemens-children-the-war-you-havent-heard-about/5645513

"Baby baby I'm aware of where you go..." each time a child is jailed.  Huddled on cold concrete floors without love or their parents.  America goes to Hell in a hand-basket, that's where.  "Think it ov-v-er..."

So yesterday I went out to the West County Detention Center (the # 71 bus will deposit you right at its doorstep) to see what was up.  Apparently plans are afoot to house immigrants inside of that structure or else in tents next to it.  Didn't see any immigrant babies.  Didn't see any tents.  Didn't see much of anything -- except for a whole bunch of gigantic business warehouses located right down the street.  Warehousing people right next to warehousing things?  How appropriate is that?

But then I discovered that the detention facility abuts right up against the Pinole Regional Park -- so I hiked around that for a while and took photos of what I could see of the detention center from the rear.  Not much.  http://richmondconfidential.org/2012/11/30/inside-the-west-county-jail/ 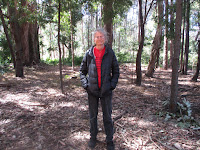 I also learned that this whole area used to belong to the Ohlone Indians.  How ironic is that!  Now the Ohlone Native Americans are long gone -- but they are about to be replaced with even more Native Americans.  Lest we forget, most immigrants from Mexico and Honduras are Native Americans too.  Shouldn't they have first dibs to this land instead of having to sneak into it like thieves in the night?  Shouldn't the Ohlone and the Cheyenne and the Sioux also be protesting the cruel and unusual incarceration and torture of their brothers' children?  And, BTW, shouldn't the rest of us be protesting this too?  We are all our brothers' keepers.  "Send not for whom the bell tolls..."

And to quote Diana Ross again here, "Come see about me -- see about your baby."  And The Supremes are also right on message when they sing about love.  Love is so much more better than hate.  Hell, love is better than anything.

But forget about love.  This whole miserable ugly sewer-like stain and blot on the history of America is basically ALL ABOUT MONEY.  If any of those cruelly-incarcerated immigrant families had been born with silver spoons in their mouths, we wouldn't even be having this discussion.  They would have been flown to Washington in private jets and put up in the best hotels.  They would have been feted by Congress and served state dinners at the White House using the good china -- no matter what they have done.  Members of M-13?  Not a problem.

For example, both Netanyahu the Butcher of Gaza and that evil Saudi prince who murders babies in Yemen are treated like royalty in Washington.  Why aren't these hard-working decent immigrant families coming to America given the same treatment instead of having their children cruelly ripped away?  Ha.  In America today, the rich always get richer -- and always at the expense of you and me.  Always.  It's the law.  Just ask the Supreme Court. 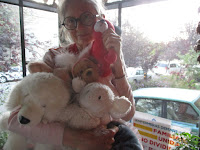 PS:  If you too want to go "see about your baby" and caravan to one of the many detention centers in the United States that taxpayers are paying for instead of sending their kids to Harvard, there is information on how to do it at http://caravans4ninos.com.

Just form up a caravan, collect some stuffies and blankies for these sad and lonely children and off you go.  And thanks.  https://www.washingtonpost.com/graphics/2018/national/migrant-child-shelters/?noredirect=on&utm_term=.685ded562f2d

Stop Wall Street and War Street from destroying our world.   And while you're at it, please buy my books.  https://www.amazon.com/Jane-Stillwater/e/B00IW6O1RM
Posted by Jane Stillwater at 1:09 PM