Meeting the Buddha for lunch in New York City

For some unknown reason, I've only been able to do a half-fast for Ramadan this year.  Here's me, barely limping along without food until mid-afternoon, never quite making it to sundown.  My bad.  But I'm doing the best that I can -- in solidarity with the millions of tortured, vilified, starving and endangered people in Gaza, Bethlehem, Syria, Libya, Iraq, Yemen, Afghanistan, etc.

On Sunday I broke my fast with a nice bowl of rice pudding at Barney Greengrass's famous kosher restaurant on the Upper West Side, an area that many former Israelis have immigrated into lately (apparently one in six Israelis no longer live in Israel and have been voting against Netanyahu with their feet).

On Monday I broke my fast in Harlem, eating shrimp and grits at that iconic luncheonette founded by "Sylvia, the Queen of Soul Food" -- followed by a quick trip to the Apollo theater to buy an iconic T-shirt and reminisce on the good old days when I used to buy a seat in the second balcony every Saturday night for only a dollar and change. 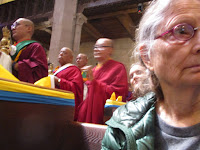 On Tuesday I broke my fast with some kosher rice pudding from B&H Dairy -- after a morning spent at the historic Riverside Church.  Long story.  Here's the abridged version.  The 17th Gyalwa Karmapa is the latest reincarnation of a long line of Karmapas going back almost to the Buddha himself.  This Karmapa talked to us about compassion, the highest form of human emotion.  And right then and there, in the 26th pew on the left, I had a sudden enlightening realization -- that most of our leaders in Washington are totally lacking the compassion gene and will probably be reborn as toads.  https://www.nytimes.com/2015/08/21/nyregion/bh-dairy-in-the-east-village-reopens-after-months-of-red-tape.html

So.  After this powerful experience with the Buddha, I'm now starting to wonder exactly who I will be having lunch with next.  Mohammad, Abraham, Jesus?  I'm sure that each one of them would all serve up a nice hot dish of compassion too.

The moral here?  Human beings today are starving for compassion -- not for wealth or power.  And they are certainly not starving for more "war".  We have totally grossed out on all that shite already.

Stop Wall Street and War Street from destroying our world.   And while you're at it, please buy my books.  https://www.amazon.com/Jane-Stillwater/e/B00IW6O1RM
Posted by Jane Stillwater at 10:25 AM