Border War:  Mexico to break diplomatic ties with the US?

How do I know that all of the brutal atrocities now being perpetrated by America down at the US/Mexican border do indeed constitute a real authentic genuine war?  That's a no-brainer.  Because there are whole bunches of American war-profiteers now lined up in Washington knee deep -- with their hands already shoved deeply inside the federal piggy bank.  And everyone knows that America can't just stage a war unless there are war profiteers involved!  It's practically a law. https://www.thedailybeast.com/nonprofit-execs-rake-in-cash-from-child-detention-center-funding


We saw this happening before in all those wars-for-profit forced down the throats of Vietnam, Afghanistan, Libya, Syria, Iraq, Guatemala, Honduras -- even Gaza.  To paraphrase Billy Idol, "With a greedy yell they shouted 'More!  More!  More!'"  https://www.youtube.com/watch?v=BPwZaQfoIbU

So.  If Latin American governments are going to maintain any self-respect at all, Mexico, Honduras and all those other countries south of the border that have been victims of American imperialism urgently need to sever diplomatic relations the US in protest until this dirty little "war" is over -- and to throw out all those greedy American corporations who are making mucho profits down there too.  https://www.reuters.com/article/us-usa-immigration-stocks-prisons/prison-shares-rise-as-u-s-eyes-more-migrant-family-detention-space-idUSKBN1JI2YU

"Why did you even come here?" I recently asked one desperate immigrant who I ran into on the street while he was searching for shite jobs that no American would even want.

"I came here after the Gringos took everything I had -- just like the Spaniard bastards before them did.  I am only trying to take back what used to be mine before NAFTA, before the Alamo, even before the US seized Alta California."  Oh.  https://www.usatoday.com/border-wall/story/us-trade-mexico-imports-tomatoes/585350001/

War profiteers are now raking in whole mountains of our tax dollars along the Mexican border.  That's blood money now used to house kidnapped babies that we could be using to fix our bridges and send our kids to college instead. https://www.rollingstone.com/politics/news/family-separation-explained-w521891

And as for the immigrants themselves?  They don't want to be here.  Hell, it's cold up here, housing costs are through the roof and nobody even speaks Spanish.  They are only following the trail of their stolen wealth.

So let's see if all those Latin American governments can finally go all machismo for a good cause this time -- and shut down their embassies and consulates in protest of America's dirty little border war-for-profit, its dirty little war on children. 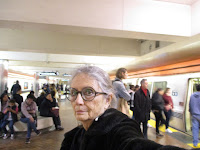 PS:   I myself was planning to join a caravan of cars going from Berkeley down to the Texas/Mexico border in order to protest this outrage against human decency -- but it looks like I won't have to go that far after all.  Apparently the US Navy is planning to warehouse 45,000 immigrants over in Concord, CA, just a 20-minute BART train ride away from me.  I can go protest in Concord and still be back home in time for dinner.  https://patch.com/california/concord-ca/90-000-immigrants-could-be-housed-california-tent-cities
_____________________________

Posted by Jane Stillwater at 11:22 AM