I was raised in the suburbs.  Back in the Boomer days, suburbs were spozed to be wonderful places where residents could relax, enjoy nature and be happy.  Funny how it didn't work out that way.  My father commuted to his job Monday through Friday, was gone from 6:00 in the morning to 8:00 at night and also worked a second job on weekends to pay off our suburban mortgage.  So much for smelling the flowers.  And my college-educated mother was bored out of her freaking mind with her life there as chief maid, cook, bottle-washer and nanny to her mostly-absent husband and two ungrateful brats.  Ah, white flight.

There are clearly a whole lot of advantages to living in a city.

However, for Black people who were forced to live in cramped city slums, who had no access to decent employment or education and who were the targeted customers of their drug-dealing CIA sales reps, urban life was a nightmare.  https://www.youtube.com/watch?v=W4U1ozz7nM8

"Wanna change places?" bored suburban commuters and housewives suddenly started asking Black people.  "We'll take back Harlem and you can go enjoy the wonders of nature by living in a tent under a bridge."

Can you believe it?  First Black people were forced into Harlem because nobody else wanted it.  Red-lining, slumlords and all that.  Crappy schools.  Unemployment.  Bigotry.  80% of the housing stock in Harlem was under-code and sucked eggs.  "But those are genuine brownstones!" the Yuppies and Techies suddenly cried -- and suddenly their race for real estate in Harlem was on.  https://www.youtube.com/watch?v=zOoutJtMCi8

Black people originally came to Harlem in desperate flight from the extreme brutality of Southern Jim Crow.  Seeking their freedom in New York City, they soon discovered that they were living in a concentration camp instead. 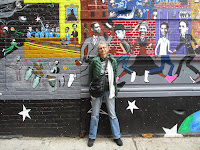 Back in those days Harlem may not have been surrounded by barbed wire like Manzanar or Auschwitz or Gaza, but the iron fist of American social norms (not to mention the New York PD's iron fist) kept Black people trapped there just the same.  And so they did the best that they could and made this new Harlem concentration camp their home -- "made something out of nothing".  But now they don't even have that.

I just got back from a walking tour of Harlem.  In Harlem today, signs reading "Condo for Sale" are now a common sight.  There is even a freaking Whole Foods located right there on the corner of Malcolm X Boulevard and 125th Street.  So much for white flight.  Goodbye Harlem.  It's now called Central Park North.

And when brownstones in Harlem are sold for several million dollars each (one seller was asking over six million bucks), who gets all that money?  Does it go to the Black grandmother who had religiously paid her rent every month for the last 50 years?  Even though her landlord never made any repairs and yet charged her double the amount that White people were paying for the same sized unit elsewhere in Manhattan?

Or do those millions of dollars go to the slumlord who had already made more profit on each brownstone than is morally possible?  What would your educated guess be?

Stop Wall Street and War Street from destroying our world.   And while you're at it, please buy my books.  https://www.amazon.com/Jane-Stillwater/e/B00IW6O1RM
Posted by Jane Stillwater at 9:55 AM