Six years ago, my three-year-old granddaughter Mena was spending the night with me.  All evening long she had been wheezing, listless and pale.  Finally at around 2:00 am, she practically crawled into my bedroom, coughing, choking and white as a sheet.  "Gaia, I need to go to the hospital -- now!" she said.  I didn't waste any time.

We were still in our nightgowns when the doctor told us, "Worst case of asthma I've ever seen.  A few more minutes and she would have been dead!  You saved her life."  No, I didn't.  Mena saved her own life.  And since that day, I've always listened closely to everything she was telling me, just in case.

Later that month, Mena also told me, "Toys are my only friends."  What could I say to that?  I told her the truth.  "Sometimes I think that books are my only friends."  So when I recently went off to the Javits Center in New York City to attend the 2018 "Book Expo America" being held there -- and walked into a whole giant building all filled with nothing but books, I couldn't help but think that I had just entered a building filled with hundreds and hundreds of my very best friends. 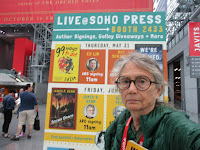 Once the doors of the Book Expo opened, I immediately made my way down to Soho Crime's exhibit booth and scored an advance-reader copy of the hilarious new Colin Cotterill book, "Don't Eat Me" (and, yes, I did feel rather strange reading a book with a title like that on the subway -- but well worth every stare).  https://sohopress.com/soho-crime/

I also gleefully swept up five other murder-mystery books by some of my favorite Soho authors -- Martin Limon, Timothy Hallinan, Mick Herron, Gina Apostol and James R. Benn.  I love murder mysteries because, unlike in real life, justice is always done by the time we reach the last page.  https://www.globalresearch.ca/drivers-behind-the-war-on-syria-and-the-impoverishment-of-us-all/5644381

The next evening Bernie Sanders spoke at the Book Expo.  Gotta love Bernie.  Good grief, how I wish he was in the White House right now instead of having to helplessly watch Trump's yard sale of everything that is American.  I voted for Bernie.  The only thing that used to be wrong with Bernie was his tolerant policy toward Israeli neo-colonialist state-sponsored terrorism.  But recently he has been wising up -- as have the rest of Americans who actually keep up with the horrors happily inflicted onto the rest of the Middle East by neo-con Zionists.

How does that joke go?  "We should make America name Israel as its 51st state," someone recently suggested to Benjamin Netanyahu.

"Why should we do that?" answered Bibi.  "Then we would only have two Senators in Washington.  Right now we already have 50."  And yet people talk about Russia buying our elections?  Donnie the Mole and Crooked Hilary could never have been bought off by Russia -- because Israeli neo-cons already owned both of them body and soul.  Humph.

While at the Book Expo, I also tried to get a few publishers interested in re-publishing my book "Bring Your Own Flak Jacket: Helpful Tips for Touring Today's Middle East".  https://www.amazon.com/Bring-Your-Own-Flak-Jacket/dp/0978615719

"But this book was written in 2007," one publisher exclaimed.

"So what," I replied.  "It's still totally right up-to-date.  In the Middle East?  Nothing has changed at all in the last decade.  Americans, Israeli neo-cons and Saudis are still brutally slaughtering anything that moves."  Except that now they are getting even better at it.  http://foreignpolicy.com/2018/06/11/u-s-backed-catastrophe-brewing-in-yemen/

And then I had lunch with my friend Dinky -- who casually mentioned that her son had just won the Pulitzer Prize.  "What!"  Wow!  And her son, James Forman Jr, also spoke at the Book Expo.  And thus I was gently reminded that books weren't my only friends.  But books, however, will always remain my really really good friends.  https://www.jamesformanjr.com/

Stop Wall Street and War Street from destroying our world.   And while you're at it, please buy my books.  https://www.amazon.com/Jane-Stillwater/e/B00IW6O1RM
Posted by Jane Stillwater at 12:48 PM