Trump and Clinton:  Who let the dogs out!
Has anybody but me noticed that Donald Trump, during the 2016 election cycle, has done almost every single thing that he possibly can to antagonize and piss off mainstream American voters?  First he came out in favor of Russia, China and Putin.  In America, that is a total political no-no!
Trump then presented himself to voters as a racist, misogynist, homophobe and sex fiend.  What sane American would possibly vote for that freaky combination?  Apparently a lot of us did.

And even after Trump shamelessly waved his horns and tail at our so-called Christian community by disrespecting as many Biblical commandments as he possibly could and breaking the Golden Rule left and right, he still got far more electoral votes from them than Clinton did in the November 8 election (with a little help from gerrymandering, vote-counting fraud and Jim Crow -- but still).  http://www.smirkingchimp.com/node/69953
Despite the staggering odds against Trump based on his insanely bad-boy behavior, he still actually won the Electoral College vote over Clinton.  Why?  Apparently because we Americans had become that resentful of Clinton's war-hawk job-outsourcing neo-con Wall Street insider positions.  NAFTA, Libya, Goldman Sachs and all that.  "Better the devil you don't know than the devil you do," a lot of us said.
But even after Trump accidentally got elected, then what did he do then?  He coulda just kept his mouth shut and hunkered down until inauguration day -- but no.

Upon winning the election, Trump immediately continued his inexplicably-weird strategy of doing every single thing that he possibly could to still piss Americans off -- and even ratcheted up his campaign to be the most hated man in America several notches.  Considering John Bolton as SecState?  That Strangelove fanatic running our foreign policy?  Scary.  And Sam Bannon on the transition team?  That appointment alone would make AIPAC tear out its hair -- and we all know that AIPAC runs America with an iron hand.  What is Trump thinking?
Trump's assumed position against freedom of choice for women has also alienated a good percentage of the female population, both before and after the election.  And he's also gone directly against all that expensive false TV propaganda constantly lying to us about the Middle East, propaganda that has been carefully spoon-fed to us for years at great cost.  Hell.  He's even done everything he can to offend the biggest players in America today, Israel and Saudi Arabia.

Trump apparently even supports Syria's President Assad, another big CNN-Fox News-PBS propaganda no-no (support for Assad, as far as I'm concerned, is actually a good thing -- but then that's just my own foolish weakness for justice and truth.  But I digress).  http://jpstillwater.blogspot.com/2016/10/even-more-secrets-and-lies-about-aleppo.html)
Trump apparently also supports that dreadful and dangerous pipeline trying to run through Standing Rock's sacred sites at the cost of even more Native American pain and suffering -- as if Wounded Knee and the Trail of Tears weren't enough.  https://www.rt.com/usa/367650-tribal-elder-cardiac-arrest-dapl/

Trump seems to be dead-set against climate change, Social Security and healthcare too, and even uses his new bully pulpit to advertise his daughter's jewelry line.  How tacky is that?  And talks about cracking down on the internet.  And doesn't even want to reside in the White House.  How much worse can it get!
The result of all this weirdly-erratic post-election behavior by our presumptive next Prez?  Millions of Americans have now started marching and signing petitions and screaming and yelling -- demanding to actually have Clinton back!  Compared with Trump, now Clinton (aka Dick Cheney in a pantsuit) is actually starting to look good. 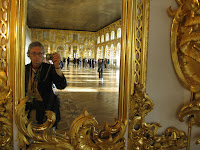 Could there be a pattern here?  A method to Trump's madness?  To see just how far he has to go before his pal Hillary finally ends up back in the White House where she and her husband belong?  Why else would a man like Trump, who used to be basically a centrist Democrat, who we all knew to be fair and unbiased on "The Apprentice," suddenly turn into an alt-Right crazy guy?  Why would he do such a thing?  What is his motivation?  What is in it for him?  He coulda been a contender!  http://jpstillwater.blogspot.com/2006/04/my-15-minutes-of-fame-auditioning-to-be.html

Posted by Jane Stillwater at 9:07 AM