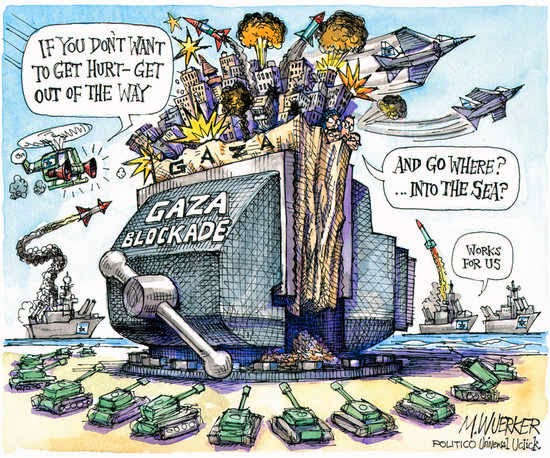 Obama & Congress sitting in a tree, spending our money to kill babies

[Author's note:  Yes, I know that I should be grateful that John McCain wasn't elected in 2008 because he would have had America in the middle of WW III by now and there probably would have been bunkers and anti-aircraft missile launchers (and also lots of American dead babies) outside my bedroom window instead of just robins, but still...we are already up to our necks in wars, proxy wars and dead babies as it is -- and I'm sick of it.]

President Obama and Congress may hate each other's guts regarding a whole lot of domestic issues -- but with regard to foreign policy, Obama and Congress just can't kiss each other's butts fast enough when it comes to agreeing to kill as many babies as humanly possible in as many foreign countries as they possibly can.  And ASAP.
Obama and Congress spend American taxpayers' money on killing babies in foreign lands like there is no tomorrow; as if all our hard-earned money could just magically and automatically replenish itself overnight like some magical ATM that never stops working, an inexhaustible resource that has no limits or end.
"Seven trillion dollars gone forever?  No problem.  It'll grow back.  The important thing here is to keep producing all those dead babies."  Can't stop now.  There are still a few left alive.
In Haiti, dead babies.  "They all would have died in fifty or sixty years anyway."  http://www.voltairenet.org/article163604.html
In Ukraine, dead babies.  "But those babies were rebels, clearly red-diaper babies!"  http://jpstillwater.blogspot.com/2014/07/ukraine-negroponte-missiles-oh-my-poor.html
Afghanistan's dead babies keep piling up like cordwood.  "We thought they were Taliban!  Diapers, not head-cloths?  Nah."  http://www.usnews.com/news/world/articles/2014/07/09/un-afghan-civilian-death-toll-up-so-far-this-year

Dead babies in Iraq, murdered by ISIS, weaponized and trained by Obama and Congress.  "Just collateral damage that got in the way of the oil.  Again.  Pesky babies." http://www.theguardian.com/world/2014/jul/18/iraqi-civilian-death-toll-5500-2014-isis

Dead babies in Pakistan, Yemen, Somalia, Sudan and, hopefully, Iran next.  "Those babies possessed WMDs!"
Dead babies in Libya, Egypt, Africa and Palestine.  "Ah, the smell of dead babies in the morning."  http://www.thedailybeast.com/articles/2014/07/24/born-in-hell-the-gaza-maternity-ward.html    Dead babies in Honduras.  "They won't be camping at our borders any more -- because they will be dead."  http://otherwords.org/honduras-is-the-real-benghazi/
And don't forget poor bleeding Syria, where Congress and Obama happily released the Kraken, er, ISIS on all kinds of babies that used to be living.  "Those babies were dictators!  They had to go!"  http://jpstillwater.blogspot.com/2014/06/eye-witness-syria-americas-barbarians.html
And now Obama and Congress have solemnly shaken hands and agreed that Palestine and Gaza both need more dead babies too.  http://mondoweiss.net/2014/07/awaiting-horrifying-following.html    "The only difference between the 'shooting fish in a barrel' attack on the USS Liberty and the 'shooting fish in a barrel' attack on Gaza is that there were no babies on board the USS Liberty.  What a waste."

And even as we speak, Obama and Congress still tirelessly continue to work together, constantly dragging gigantic bags of gold coins over to the Pentagon; hundreds of thousands of black bags that contain over half of all the money that we Americans will ever earn in our lifetimes -- huge black bags of gold, all clearly labeled "Dead Baby Fund".
I want no part of any of this.
Do you?
Posted by Jane Stillwater at 6:02 PM