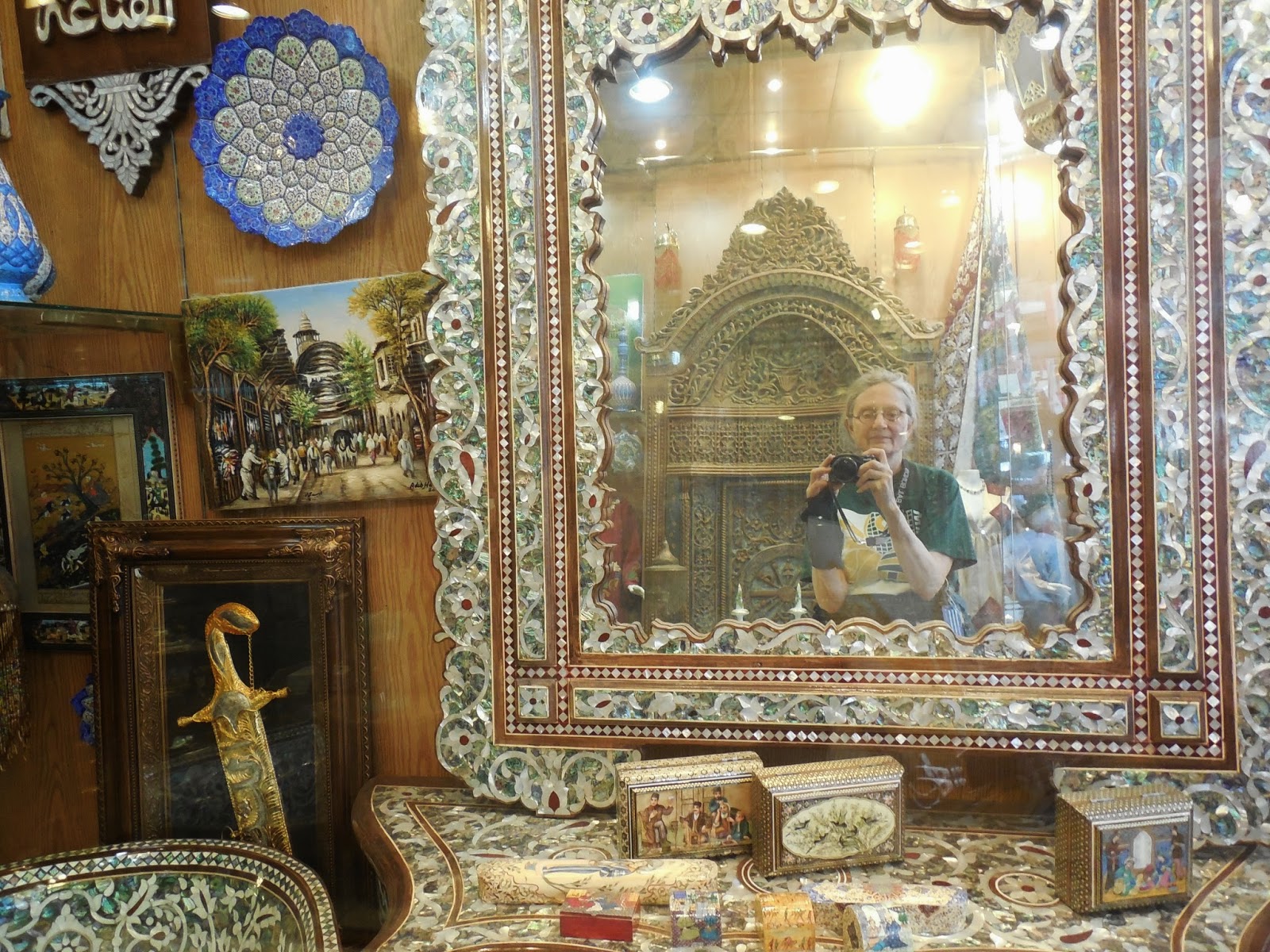 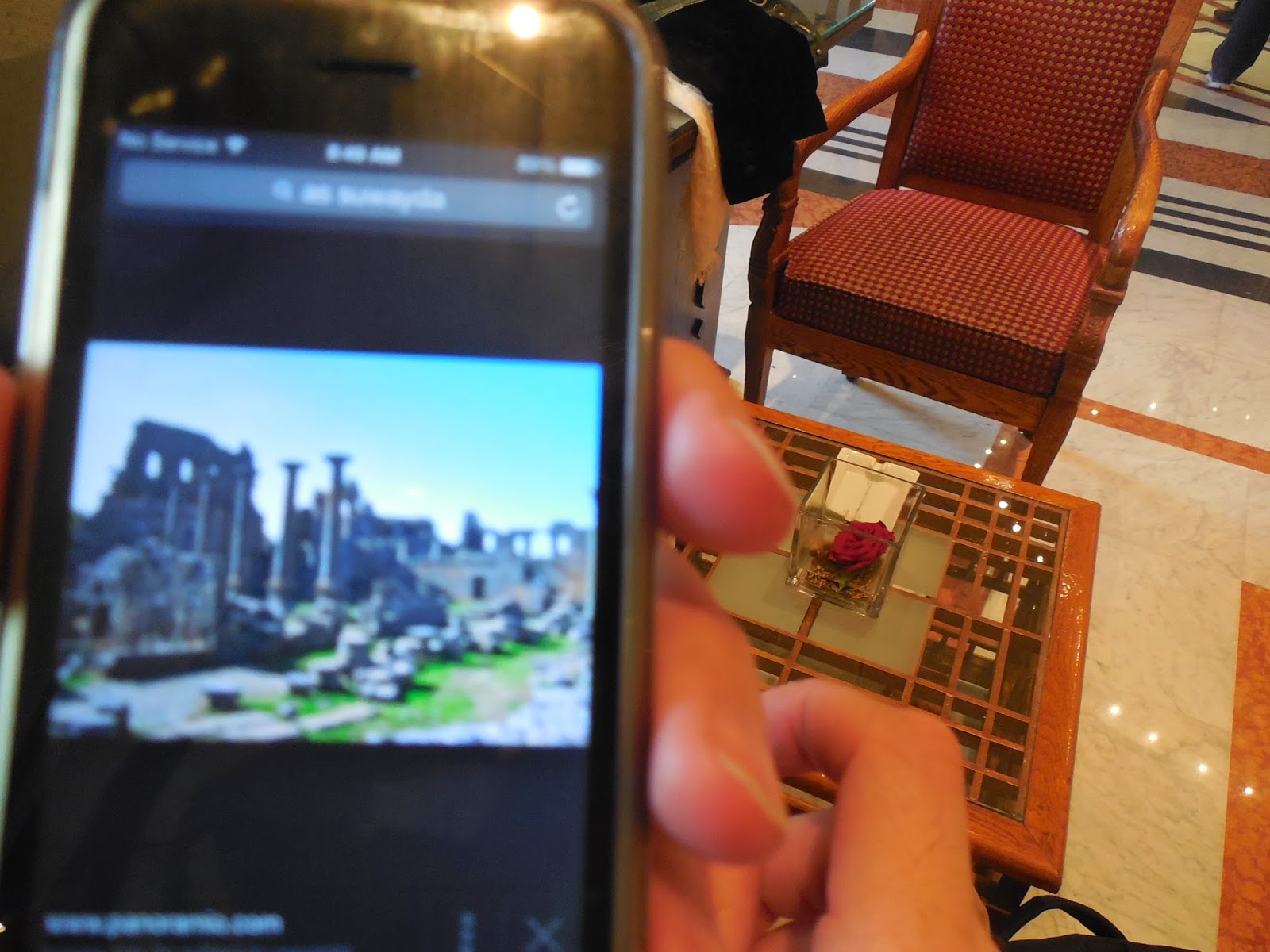 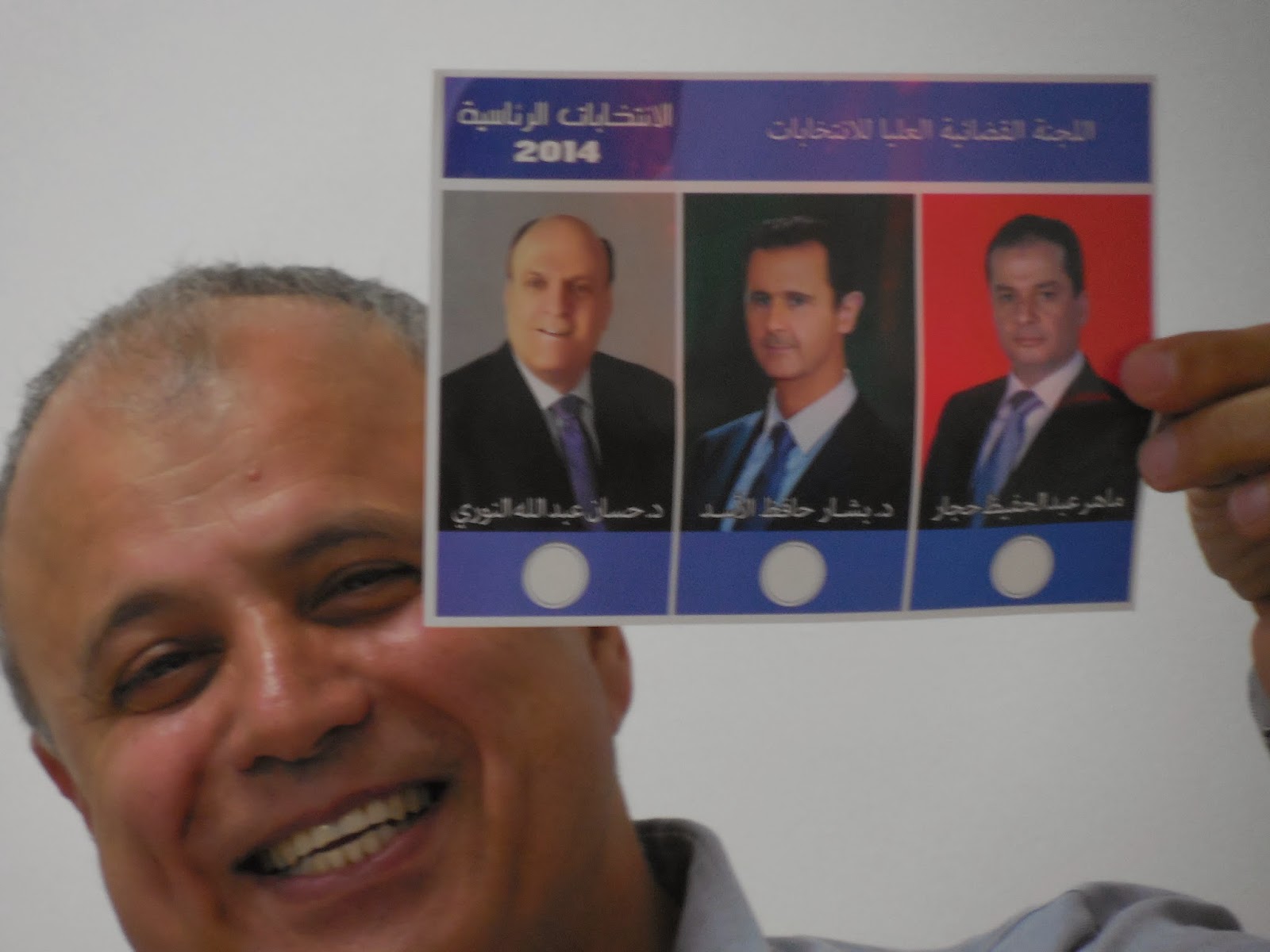 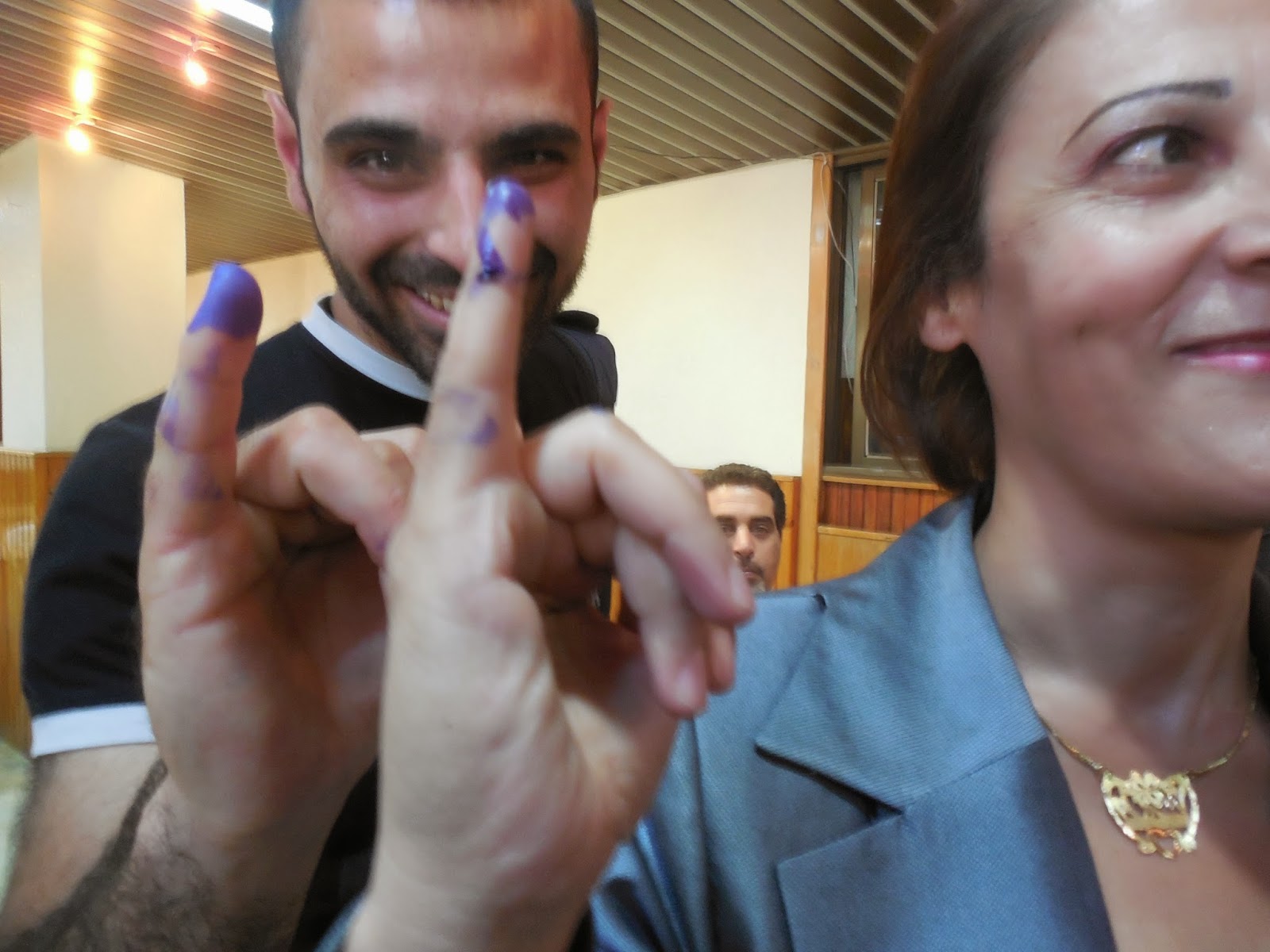 Eye-witness Syria: (America's) barbarians at the gate
Now that I'm back here in America after personally observing Syria's recent presidential elections, I've been totally amazed at some of the fabrications, gross exaggerations and out-right lies that my country's mainstream media has come up with regarding these vote results.
"Election fraud in Syria!" the newspapers cry over and over again.  "Assad forces Syrians to vote for him!  The elections were coerced!" plus many many other words to that effect.  And even President Obama jumped on the band wagon -- after even he himself has committed election fraud of a sort, having run on a ticket of peace and more jobs and then giving us war and no jobs instead.  To say nothing of when G.W. Bush stole the Florida and Ohio elections.  Twice!
Well. I am here to tell you that what they are saying about the Syrian elections is just so much bull dookie.  And how do I know?  I was there.  In Syria.  They weren't.  Eye-witness accounts always trump outsourced fabrications.  Hopefully.
And so in the name of setting the record straight, I've decided to type up all of my various 50 pages of notes that I took over there in order to show you, step by step, minute by minute, what actually happened over in Syria -- to me personally. 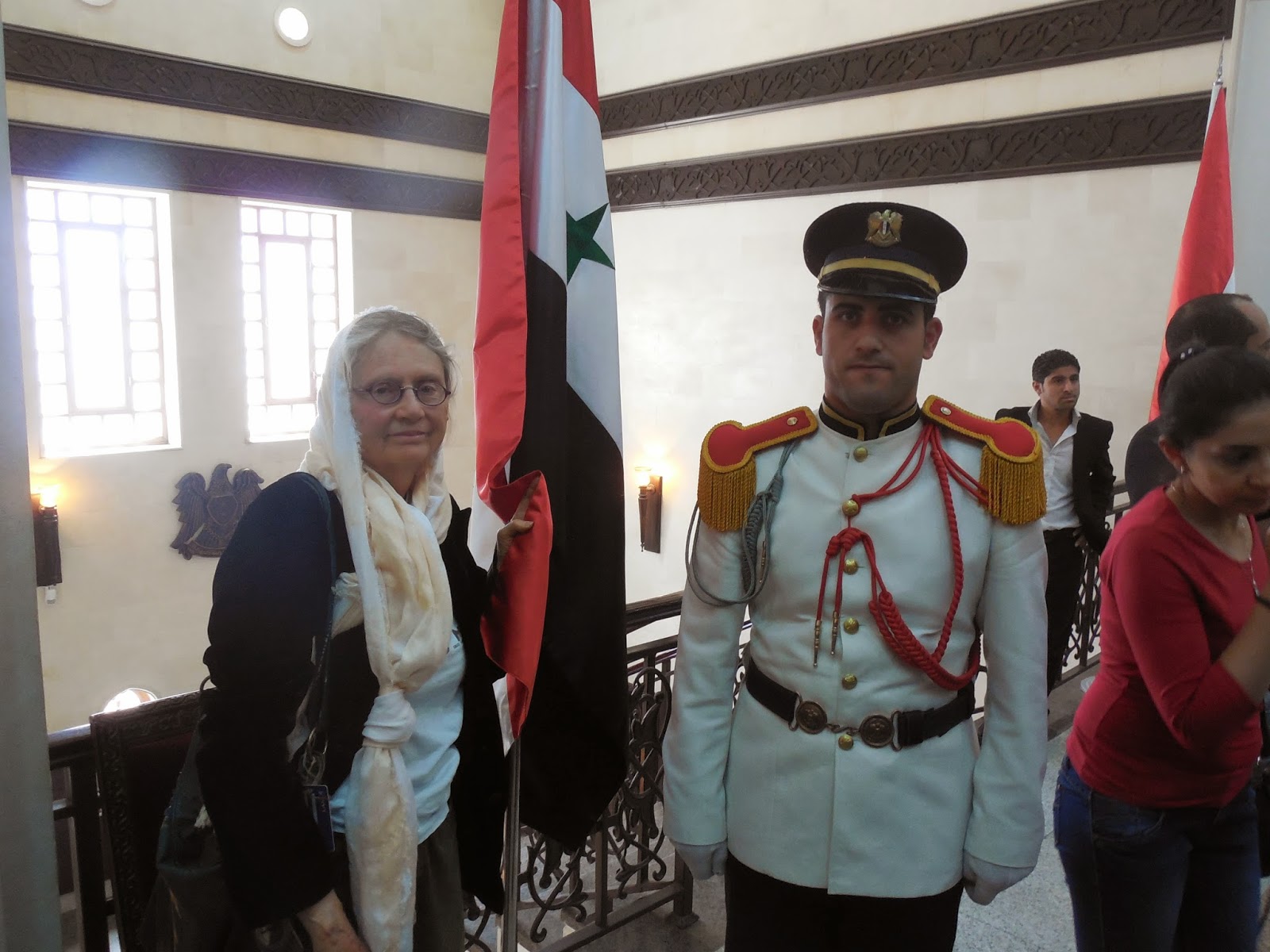 This eye-witness account is going to be a long read -- but an accurate one.  Some good stuff happened.  And some bad stuff.  And some fun stuff too (fun stuff in a war zone?  Huh?)  But I dare you to read it.  And if you do, I'm sure you will find that it will be just like you came along to Syria with me.
Here is the link:  http://jpstillwater.blogspot.com/2014/06/normal-0-false-false-false-en-us-x-none.htmlPS:  How much do you know about America's new "Army of One"?  It's just not your father's Army any more.  Or even your son's (or your daughter's).  The new U.S. Army appears to have gone totally mercenary -- and its new source of recruits goes way far beyond just hiring some Blackwater guys sporting AK-47s or a Bangladeshi kitchen crew.  http://www.counterpunch.org/2014/06/06/the-bankrupt-war-on-syria/     Under America's new rules of war, recruiters don't have offices on Main Street USA any more.  Instead they have offices in poverty-stricken countries like Chechnya, Afghanistan, Somalia and South Sudan -- any godforsaken hell-hole where there is over 50% employment.  "Wanna interesting job with good pay," American recruiters whisper into future soldiers' ears.  But the good pay these recruiters are offering is this:  When these new soldiers come home in a box, their families might possibly be given burial expenses.

And, trust me, these new recruits are a whole different breed from your traditional G.I. Joe.  They are angry.  They are far from home.  They have had a grueling hand-to-mouth childhood.  Many of them are wingnut religious fanatics who think that the Bible and the Koran are all about slaughter and vengeance, not compassion and justice.  And they truly do not care who they kill.       And did I already mention that these new recruits work for cheap?  No need for pensions plans or VA hospitals or none of that other slacker stuff for them.  These guys are the ultimate outsourcing/cheap labor Republican wet dream.      Too bad that the neo-Nazi blood-thirsty recruits that Wall Street and War Street have hired in Ukraine are refusing to work as cheaply as the ones that they send to Syria.     However, thanks to this new recruiting policy, no one back home in America whines and bellyaches any more because their sons and daughters have been killed while defending America's military-industrial complex's oil either.  This is a win-win situation for American war mongers.  The Bush dynasty and Mr. Cheney must be ecstatic right now.  But Eisenhower must be rolling over in his grave.     In addition, these new fanatical terrorist jihadi wingnut recruits are actually really really good at doing what they have come to love best:  Killing and looting.  They just took over Mosul and Tikrit in Iraq, no small feat.  And they have been driving Syria bananas over the last three years, like so many psychotic bedbugs.  Forget the Marines!  These new recruits are always Semper Fi -- to whoever pays them peanuts to behead civilians and rape women.  And Americans like you and me are paying billions to keep these wannabe butchers in the field.     Welcome to the new "Army of One".PPS:  Perhaps I may be wrong about all those crazy-eyed jihadis and wingnut foreign fighters earning almost nothing in their American paychecks.  I just read an article about how ISIS (the main jihadi gang of thugs operating in Syria) has pretty much sacked a lot of Syria's wealth.     Basically ISIS has just swooped in and looted Syria like so many pirates -- and now, with American and Saudi help, it is also looting Iraq too.  Let me make one thing clear:  These barbarians do not want to start an Islamic civil society in the Middle East.  They just want to plunder.  "Argh."     According to Alakbar English, "ISIS currently controls many [oil] fields and is battling for control for more fields still.  According to al-Nusra sources, one oil well south of Raqqa brings in up to $1.3 million per day, while other fields in and around Raqqa like Zamla, al-Tabaqa, and Kuniko bring in $500,000 per day, in addition to unknown revenues from the Jazal and Shaer oil fields, and al-Jafra (oil and gas).

"ISIS also profits from thousands of kidnappings and ransoms involving locals and foreigners, including journalists, as well as robbery and looting, including of archaeological sites and factories.  For example, ISIS seized control of large factories in Aleppo, including the government-owned railway and cables factory, a batteries factory, and a tractor factory.  In some cases, ISIS dismantled and sold their equipment and machinery.  Al-Nusra sources put the resulting revenues at $1 million per month.


"In addition, ISIS has taken control of grains and cotton production in the eastern regions.  For instance, al-Nusra accuses Amer al-Rafdan, one of the most prominent figures in ISIS, of stealing $5 million worth of cotton in Deir al-Zour alone.  Meanwhile, al-Nusra sources say that ISIS has earned more than $25 million from al-Alia grain silos in Al-Hasakah.


"The conflict in Syria has also allowed ISIS to put its hands on a large arsenal of weaponry, consisting of both weapons seized in combat and weapons purchased directly from arms dealers, who are always willing to sell weapons to just about everyone."  http://english.al-akhbar.com/node/20133
This is just plain scary.  This is just like when the barbarians sacked and burned ancient Rome.  And now the same Middle Eastern jihadi wingnuts who tried to sack and burn Syria have gone on to sack and burn Mosul and Tikrit too (not to mention Benghazi et al.)  And Baghdad is next.  http://www.theguardian.com/world/2014/jun/10/iraq-sunni-insurgents-islamic-militants-seize-control-mosul       And one election observer I met in Damascus also brought up another good point.  "Something about this advance does not add up.  How could 1,500 fighters hold a town or a province?  How come American satellites did not see this coming?  Major advances like that are not easily done."  Not unless America and Saudi Arabia are offering up the technology and footing the bill.  Duh.       Wall Street and War Street should be ashamed for supporting these kinds of hoodlums.  And what if they come over here to sack and burn us next?  "Sorry, I plan to be out of town that weekend," just isn't gonna wash.  But, oops, too late now.  The FBI has already claimed that Saudi and Chechen barbarians have already been active in Boston and New York.
These pirating wingnuts in ISIS are psychotic.  The American military-industrial complex may think that their pirate crews in the Middle East are controllable -- but, guys, this is not Halloween.  You are playing with fire. 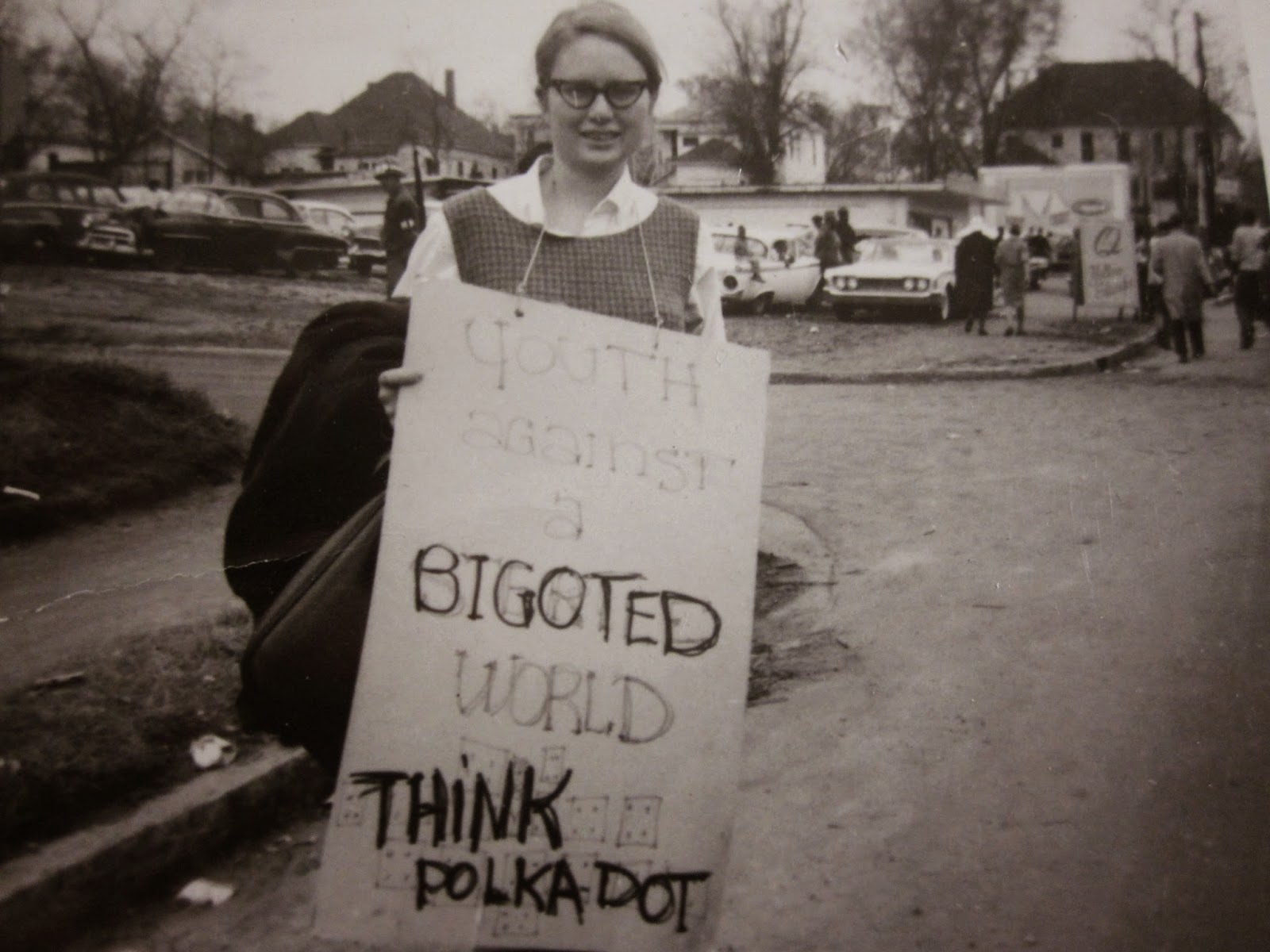