It was one of the main events of the convention.  FBI Director James Comey strides up to the microphone and starts telling a sea of attorneys, a wall of media guys and a bunch of special agents in black suits all about the FBI's new plans for combating cyber crimes and its newly-discovered love of transparency.

"Regarding cyber crimes, we have two policies:  Imposing costs and shaming.  We shame the Chinese to get them to stop criminal activity."  Sounds like an unlikely plan -- but go for it.  And perhaps if the FBI also shames the American military-industrial complex, said complex will stop its war crimes in the Middle East as well.  But that's really unlikely.

"Regarding the Clinton e-mail issue," he says, "Our process was unprecedented -- to show such transparency regarding our facts and our recommendations.  We wanted to reassure the American people."

And then the moderator asked for questions from the floor, thus creating a dilemma for me.  Imagine you were me -- in a huge auditorium with the Director of the FBI himself, national media, a lot of special agents and over 250 attorneys in suits.  Then imagine that you had a burning question to ask Director Comey.  What would you do?

a)  Shrink down in your seat and be quiet (like most of the rest of America);

b)  Realize that you have a very important question to ask Director Comey but are too shy and embarrassed to ask it;

c)  Struggle into your Big Girl pants, take a deep breath and raise your hand to ask the Director, "How come you gave Hillary Clinton a pass on her cyber crimes against Americans, but didn't even try to give a pass to Chelsea Manning, Edward Snowden and Julian Assange -- who actually were trying to make our corporate-controlled government more transparent?

If you had chosen d), none of the above, then you would be right.  Only two people in the audience were selected to have their questions answered -- and both of them appeared to be obvious plants.  Your question will never get answered.

PS:  On a happier note, I also got to attend an excellent break-out section at the convention -- on the Ferguson question and what attorneys can do to help level the playing field for racial minorities.  "We don't need more jails.  We need more education and jobs.  America cannot incarcerate itself out of this problem.  We've had 100 years of incarceration already and it hasn't worked," said one speaker.

"Lawyers have always been leaders," another speaker pointed out.  "We have to step up and make changes ourselves.  We have a moral duty.  Blacks have always had to depend on the court system in America, and our court system has failed them since Day One.  It is time to humanize people -- all people.  And to also get the ABA to take a stand."  http://shop.americanbar.org/eBus/Store/ProductDetails.aspx?productId=227839539

It was then pointed out how much power the American Bar Association actually wields -- and how they can use their power for good.  For instance, the ABA could advocate for a national standard for the use of lethal force by police only if less deadly forces aren't available. 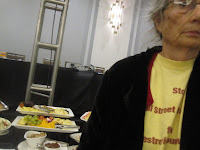 The ABA also gave a really nice reception after Director Comey's speech -- and it involved shrimp cocktails from Fisherman's Wharf, antipasto from North Beach, quesadillas from La Mission and spring rolls from Chinatown.  Now that's a level playing field for minorities that I can really get behind.  I'd advocate for that.  And next time perhaps they will serve soul food from the Fillmore as well.

Posted by Jane Stillwater at 8:21 AM