I just attended the 31st annual national Veterans for Peace convention here in Berkeley and was truly inspired by the hundreds of vets who attended it, and by their organization's heroic stand for peace.  As one vet put it, "Been there, done that -- war doesn't work." 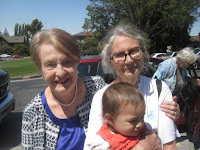 And while wandering around the grounds of the convention center before the festivities began, I ran into Helen Caldicott, an Australian doctor who has bravely spoken out against the use of nuclear weapons ever since the terrible days of America's Cold War.  I'm not sure what I was expecting that she would look like -- perhaps Super Girl in a cape?  But she was just an ordinary-looking person, like someone you would meet on the street.  Until she started speaking to an audience of 300-plus veterans.  And then her eyes flashed, her voice rang out like a warning bell and her passion came alive.

"I am a pediatrician," she told us, "and if you love this planet, if you love the next generation of babies, you will change the priority of your lives -- because right now, America's top priority seems to be for us to come as close to nuclear war as we possibly can."

"A baby is a baby is a baby -- born with that beautiful purity of soul.  We have to tap into that.  But instead our political representatives have become corporate prostitutes.  Americans hold the golden key to the future.  But instead, Americans are holding the world for ransom with their guns and their bombs."  And according to Caldecott, what a lot of bombs we do have!

And as if all those mega-stockpiles of bombs we have now aren't enough, "the government is currently planning to spend one trillion dollars more on replacing every single bomb, tank and missile we own."  http://www.smirkingchimp.com/node/68527  And if that's not scary enough for ya, America still thinks it can fight and win a nuclear war.  No no no and no!  The powers that be think that dropping 100 nuclear bombs on 100 cities will win the current war-de-jour for us.  "But all that will do is end life on earth."

And the most scary part of all is that, "It could happen tonight.  It could happen right now.  We are closer now to nuclear annihilation than ever, even closer than we were during the Cold War.  North Korea and Iran cannot end the world.  But the sociopaths in charge of our nuclear weapons can.  For instance, Clinton has never seen a war that she doesn't like."

And Americans don't clearly understand what a nuclear war will be like either.  "Everything throughout the world will be vaporized and burned."  If we understood this, we would all be taking to the streets in protest right now.  Perhaps we think that American exceptionalism will save us?  "What exactly are Americans exceptional at?  Nothing.  They don't even have kangaroos."

And fighting with Russia is crazy.  Continuing to stock Europe with nuclear weapons pointed at Russia is like waving a red flag at a bull.  It would be as if Russia was arming Canada with nuclear missiles aimed straight at Washington DC.  Not cool at all.  "The Russians will fight to the last person to defend themselves, just like they did against Hitler.  Putin is being set up as the evil one in this scenario, but it is the USA that is the evil one," by even thinking that they can actually win a nuclear war.

Caldicott spoke passionately about her motivation for trying to stop nuclear war -- motivated by her love of our babies who will grow up to be our next generation.  And we can only hope that these babies will grow up to be wiser than us.  Or at least that they will even get a chance to grow up!

Posted by Jane Stillwater at 8:32 AM