Remember that historic Arab Spring? Ten years later, has anything changed at all?
Here we are now, ten years after having breathlessly watched on TV as the entire Arab world rose up and demanded justice and freedom.  Has it actually been that long?  Yeah.  But what does the Arab world look like now?  Free and independent and happy?  Let's take a peek.
Egypt?  One cruel dictator has been replaced by another.

Yemen?  A slaughterhouse worse than any Chicago stockyard.
Israel?  A safe homeland for Jews that has been hijacked by bad guys and thugs who know only blood-lust.
Libya?  Don't even ask.  "We came, we saw, we murdered a whole bunch of people and called it humanitarianism."
Syria?  For ten long years, America has used the Arab Spring as an excuse to hire various bad guys and thugs to murder Syrians and steal Syria's oil.  One of Hillary Clinton's favorite ways to make Bibi happy was to bomb Syria.  One of the first things Trump did upon taking office was to bomb Syria.  One of the first things Biden did upon taking office was to bomb Syria.  Sucks to be a Syrian today.
Palestine and Gaza?  Basically, Palestinians are still victims of a brutal occupation and still living in a bunch of abysmal gulags where their land and water is stolen, they are systematically tortured and genocide is the order of the day.  And all these evil crimes against humanity are willingly financed by American taxpayers.
Saudi Arabia?  Nothing's changed.  Still paying salaries to ISIS butchers in Syria, still blowing up busloads of school children in Yemen and still slicing and dicing journalists with bone saws.
Iraq?  The Davos Boyz are still lusting after its oil. 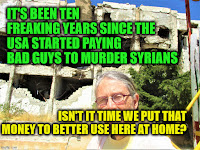 Lebanon?  Ka-boom!  "Oops, that was an accident, honest!"
Turkey?  Still having that happy bro-mance with ISIS -- as long as ISIS keeps stealing Syria's oil and handing it over to the wannabe Ottoman Empire.
So.  Ask yourself.  "Who, exactly, has benefited from the Arab Spring during these past ten years?"  The usual suspects.  Oil cartels, weapons manufacturers, the CIA, various American-backed despots and demagogues and, of course, the New World Order -- a new world order that definitely doesn't benefit Arabs (or you and me either).
PS:  Helping the Arab world to become free, independent and happy is really not all that hard to do.  Let's just get the above-mentioned Bad Guys to stop bombing Arab countries, stop stealing Arab oil and stop supporting Arab despots.  "If the Middle East ain't happy, ain't nobody happy."
Resources:
Israel is having big problems with Pfizer's experimental injection, a 40% increase in the death rate over deaths by COVID.  Self-interested leadership appears to be involved.  https://www.bitchute.com/video/lADZrilNh0W1/?fbclid=IwAR0sXVun6B1bMZyO15Ug0egIGuEETjys6C4NaTNR2Td5s4gz9K2JMQTFxTQ 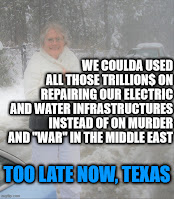 How can citizens of Gaza even live with such horror, day after day?  We need to find out -- because we too could be living like this if the Davos Boyz have their way.  "We all live in Gaza":  https://vimeo.com/313904297
I love me some good gossip -- especially when it's true:  https://www.youtube.com/watch?v=cEfQc1v-x2E
Uncle Joe -- remember back when he was one of Hillary's favorite war-criminal partners in crime?  Nothing's changed:  https://www.wsj.com/articles/u-s-airstrike-in-syria-targets-iran-backed-militia-11614299547?st=zbqzva8ar1jvp96&reflink=article_email_share
And America has the nerve to say its latest atrocity in Syria was done in order to "de-escalate" its illegal war on that country:
https://www.patreon.com/posts/us-bombs-syria-48026135?utm_medium=post_notification_email&utm_source=post_link&utm_campaign=patron_engagement
___________________________
Stop Wall Street and War Street (and Big Pharma) from destroying our world.   And while you're at it, please buy my books.  https://www.amazon.com/Jane-Stillwater/e/B00IW6O1RM
Posted by Jane Stillwater at 9:27 AM