Ayahuasca Dream #3: "All you need is love" and no computers
A good friend of mine just got back from Fresno where she had attended yet another ayahuasca ceremony.  "I wanted to observe and understand how this Amazonian herbal mixture works in relation to the human brain and our thought processes," she told me -- but I called bull-dookie on her.
"I'll bet you anything that no scientific research was involved," sez me.  My friend just laughed and told all. 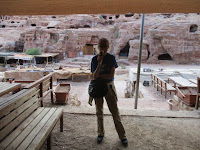 "First we stopped at a gas station near Modesto to stock up on psychedelic essentials -- bottled water, toilet paper, lottery tickets and Fritos."  Why toilet paper?  "The shaman told us that our bodies purge themselves in various ways during the ceremony.  Coughing, sneezing, diarrhea, throwing up, burps and farts.  No bodily function is off the table."
"And remember," said the shaman, "that the Mother will never give you what you want -- only what you need.  You have to keep asking her.  'Please give me what I need.'  And get fierce with her too.  Just keep asking and asking."
At that point my friend got a bit ayahuasca-hesitant but she was too far away from Berkeley to walk home so she bravely drank the brew anyway, and then spent the next ten hours repeating over and over, " Please give me what I need to make all human beings happier -- and wiser.  Even me."
First off, Ayahuasca told my friend that she needed to smile more.  Then the Mother made her get born again.  Literally.  Only this time my friend's mother hadn't been drugged up with ether, she got to be held by said mother right away instead of five days later, she got breast-fed for two freaking years and then she had a gloriously happy childhood.
"Childhood angst?  Done and dusted.  Now let's move on," said the Mother.  "Time to get rid of those pesky computers."
"But how can I possibly give up computers!" my friend wailed.
"Easy.  Why settle for that crumby desktop on your freaking dining room table when you already possess a super-powered one-trillion-gigabyte computer already."  Really?  "Yes.  You.  Your brain is the world's largest computer.  Don't settle for less.  Turn that wimpy little desktop off."  Ayahuasca had spoken.
But wait.  Ayahuasca had even more stuff to say on that subject.  "How can I communicate with my FaceBook friends?" my friend asked the Mother.
"You have all night to use your one-trillion-gigabyte computer," she answered.  "In your dreams."  Right.
"But what will I do in the daytime without my computer?" my friend asked next. 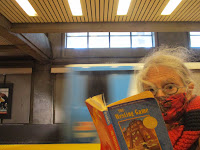 "Go for long walks.  Visit the library.  Smell the flowers.  And wait for me to send you some tasks.  But it's not only just you, my dear.  Every single human being on the planet needs to turn off his/her/their tech toys too."  That's gonna be a very hard sell.  "Get out in your community.  Hug your neighbors.  Think local for goodness sake.  High tech equals slow death.  Fact."
Perhaps the only way we will ever be truly safe and happy is to get rid of technology.  Perhaps the Amish are on the right track.  If you can't trust the Mother, who can you trust.
What next?
"The Beatles were right," continued ayahuasca.  "All you really do need is love.  John and Paul nailed it.  The human race is in Big Trouble right now."  Yeah, duh.  "But the current COVID/Trump/Biden circus doesn't even figure into the mix.  It's hate and greed and war and grasping for power over others that is wrong, wrong, wrong wrong...wrong!"
"Then what happened after that?" I asked my friend.
"The Mother went all cosmic on me.  I tried to become One with the Universe too but that clearly didn't work.  I squinted my eyes and tried really hard to die -- death of the ego and all that.  I pictured my funeral.  I pictured my corpse.  No luck."
Ayahuasca then explained everything else to my friend, laid it all out.  "You can only become one with the universe after every other human on the planet has given up their ego pretensions and become one with the universe first."  Bummer.  "But you know it's the right thing to do."  We are all our brothers' keepers.

PS:  Since so many high-tech companies have been pushing the lock-down so hard and Google has even told its employees that they will be working from home at least until July (and even after all those untested free-home-trial vaccine shots have given us the shakes and a fever), it seems only fair that all those hundreds of empty tech company "campuses" should be put to good use to house people who have been made homeless by said lock-down.
And then all said homeless people could be treated to ayahuasca ceremonies too -- so that their hopes might be restored and they too could be filled with love as well.  And could learn how to smile again.
Resources:
Chris Hedges and Cornel West on the subject of love: https://www.youtube.com/watch?v=3g_zSvtSs-A
No debate, no information, no discussion regarding the lock-down:  https://off-guardian.org/2021/01/18/anteroom-of-our-own-extinction/
Whitney also warns us about the Web: https://www.youtube.com/watch?fbclid=IwAR2fj3NSwE59bkodrEye5sJ307NzJvVMoRyKy3ItFAneWrDNvAp4us7Mv94&v=lBymXp6S-Dc&feature=youtu.be
And of course Del Bigtree still keeps trying to warn us-- and the MSM still keeps hating on him because he keeps raining on their money-grubbing parade:  https://thehighwire.com/videos/misinformation-matters/

Stop Wall Street and War Street (and Big Pharma) from destroying our world.   And while you're at it, please buy my books.  https://www.amazon.com/Jane-Stillwater/e/B00IW6O1RM
Posted by Jane Stillwater at 10:28 PM