I've got nothing to say right now because I'm still in shock about the dictatorial direction that America is currently taking -- but I'm still gonna say something anyway.

Just spent a peaceful day at the George Floyd memorial in south Minneapolis.  Saw all sorts of respect being shown by all sorts of people who came to say hello to the memory of George Floyd.  But the beat still goes on -- and Donald Trump's demand for federal violence against American citizens still drowns out any call for respect. 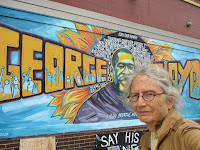 This is Trump's new re-election strategy -- to give us four more years of guns on our streets and lock-downs in our hearts.  To "Portland-ize" as many cities as humanly possible -- and to make us all want to hate each other.  "No Respect".  Trump to Send “Surge” of Federal Officers into Democrat-Run Cities

But will his cruel and violent campaign strategy really work?  Will Trump actually get re-elected?   Are Americans truly suffering from Stockholm Syndrome that badly?  After having been locked in the closet for the past four months?  We'll find out in less that a hundred more days.

I find it hard to even imagine that Trump actually plans to send federal troops wearing camo Halloween costumes to Milwaukee -- right in the middle of the Democratic Presidential Convention!   And yet that's his plan.  It even says so on his official website.  Yikes! 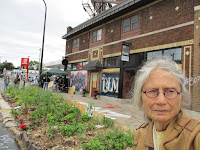 And speaking of Stockholm Syndrome, Americans just seem to love them some lock-down these days -- even despite all the good news about at least two excellent new cures and that herd immunity is coming on strong.  Thank goodness that the libraries are open in Minneapolis and corpses aren't piling up in the streets -- except in the minds of our mainstream media hacks.  To watch CNN you would think it was Armageddon out there and not just a bad seasonal flu.

And while we're all being cleverly distracted by COVID propaganda horror stories, trillions of dollars are mysteriously disappearing from our treasury while we look the other way -- and nobody knows where they go.  That's not nice at all.

"Minnesota Nice" may or may not exist.  But nobody ever talks about "America Nice".  Let's work on that one, ya? 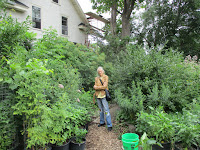 PS:  I was delighted to see so many community gardens springing up all over Minneapolis, especially in Ilhan Omar's congressional district.  Food not bombs!  "And freedom and justice for all."  Shouldn't the President of the United States be saying that -- not just me.

PPS:  Time to go board a plane to Milwaukee.  While I still can!

Yeah, COVID Was Just A Bad Flu After All. (Plus 22 Falsities You Probably Still Believe) - The EMF Guy

And no corpses in the streets of Texas either.  http://ronpaulinstitute.org/archives/featured-articles/2020/july/06/is-the-texas-covid-spike-fake-news/

Posted by Jane Stillwater at 3:03 PM