Haunted in Arkansas: My best birthday ever! 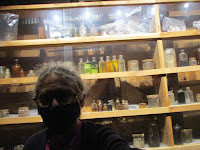 Boy did I just have an adventure.  Spent two nights at America's most haunted hotel.  Even had a paranormal experience.  How cool is that!  Woke up in the middle of the night with an unseen hand firmly holding me in place by my waist and an authoritative male voice saying "Don't move."  Trust me, I didn't.

And then, as suddenly as he had arrived, the phantom was gone.  You can't make this stuff up.  Hats off to the Crescent Hotel in Eureka Springs Arkansas for giving me the best birthday ev-ah!  https://www.crescent-hotel.com/

But I almost didn't get to Arkansas at all.  "Ghost in the Machine".  My plane was delayed at SFO, I'd missed my connection to Springfield, spent the night in a (haunt-less) hotel in Dallas and didn't get to Bart Simpson's home town until later the next day.

"Sorry, you're too late," said my rental car person.  Fine.  I'll just go over to that corner over there and cry for the next five days.  However, due to blind luck, that didn't happen either.  A really nice American Native jumped out of nowhere and offered to be my driver.


"All the way to Branson?  Then on to Eureka Springs?"  Yep.  "Really?"  He had just saved the day.  Road trip!  First stop was for fried chicken, collard greens, creamed corn, ribs and blackberry cobbler at Paula Deen's in Branson.  Yeah, I know she used the N-word.  Hey, Paula!  Black lives do matter.  But she did apologize.  A lot.  Quite a lot.  On national TV.  Over and over.  But still and all.  A whole bunch of people in the South need to apologize on national TV too.  At least Paula did it.  But her blackberry cobbler was still kind of dry.  https://www.aparat.com/v/d2y5h 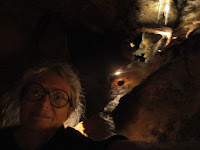 And then we stopped by the Cosmic Cavern, huge caves, far underground.  Here's me, spelunking in Arkansas.  Wow.  Just wow.  Living the life.  And have the T-shirt to prove it too.  Plus no road trip through the South would be complete without a pit stop at a firing range.  "You need to lean forward, not backward, when you pull the trigger so as the recoil won't knock you back further."  Nailed it!  Better than Calamity Jane.   https://www.cosmiccavern.com/

What's next on the menu?  More chicken and biscuits!

And speaking of firearms, I hope that our nation's police officers have taken notice about how they all have been casually thrown under the bus by America's oligarchs.  "De-fund the Police!" is all we hear these days -- but nothing at all about de-funding the oligarchs who they so faithfully serve.  https://mronline.org/2020/07/03/anatomy-of-a-counter-insurgency/?fbclid=IwAR07aeaYZMaG6Bw43YqZEfe8O339Mx-pJuRvzOxLYen0G8xpfA2O57jL0X0

The Ozark Plateau here in southern Missouri and northern Arkansas is so freaking beautiful, so very fresh and green, highlighted by its paleolithic limestone trim.  And it turns out that Mary Ballard, my Cherokee great-grandmother, was actually born in the Ozarks too.  She only moved to Tahlequah, Oklahoma, and Roswell, New Mexico, later on.  I gots Ozark DNA!  How heart-warming are these green rolling hills.  I could live here forever -- as long as I win the lottery first.  And have access to wi-fi.

Back at Branson two days later, we went to a show -- Dolly Parton's Stampede.  Trick-riding on horseback, dancing, comedy and real longhorns and buffalo too.  And a whole rotisserie chicken apiece plus pork chops, biscuits, corn on the cob, cream vegetable soup and apple turnovers.  Dolly herself wasn't in the show but they did play a video of her telling us that America was one country, united, and we'd better start acting like that.  Or words to that effect.  Dolly always has class. 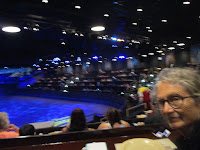 There were 600 people in the Stampede audience.  Only eight of them wore face masks.  I counted.  Wouldn't it be ironic if Missouri and Arkansas achieved herd immunity within just a few months -- while the rest of America is still hunkering down in fear and piteously whining that there is "no vaccine".  https://unlockthelockdown.com/links/

My American Native guide then dropped me back off at the Springfield airport.  He had saved the day.  He'd allowed me to play Ghost Busters at a genuine haunted hotel!  Boundless thanks to him.  Happy birthday to me.

Stop Wall Street and War Street (and Big Pharma) from destroying our world.   And while you're at it, please buy my books.  https://www.amazon.com/Jane-Stillwater/e/B00IW6O1RM
Posted by Jane Stillwater at 10:42 AM