My reconnaissance trip to Milwaukee this week is going quite well.  I've spied out the lay of the land here.  Everything looks good.  Let the invasion of happy Democratic convention delegates begin!

COVID propaganda seems to have definitely put an end to that grand old American tradition of presidential conventions for sure.  But wait!  An even better convention idea could actually arise like Venus on the half-shell from our current dreadful COVID lock-down swamp!  What if the Democrats held a Zoom convention and everybody came!  Not just the delegates but every single Democrat on the planet.  How democratic would that be.  Let's turn lemons into lemonade here, folks.  https://www.demconvention.com/press-releases/anchored-in-milwaukee-2020-democratic-national-convention-will-be-a-convention-across-america/

But as for the city of Milwaukee itself, I've just checked it out for you in advance.  It actually is a great place to visit.  And being the reigning queen of public transit, my first step was to get from the airport to my hotel on a bus.  The #80 bus did it with flash and charm -- and for only $1.25.

I had lost my list of directions on how to get from the #80's downtown bus stop up to my hotel on the corner of East Juneau and North Marshall, about sixteen blocks away.  Here's me.  Standing on the corner.  Totally lost.  Late at night.  Alone.  In the dark.  No compass.  Carrying luggage.  Yikes!

So I asked a large Black man hanging out in front of a bar, "Do you know how to get to the Astor Hotel?"  He just shrugged.

"But for five dollars, I'll drive you there," he added after some thought.  Deal!  And that's how I met the heroic Jim, who would later drive me all over Milwaukee in his truck.  Future convention-goers would be lucky to run into him too.  Just sayin'.  Although I don't know whether or not Jim does Zoom.

I found out later that the #30 bus would have taken me straight to the Astor, a huge old hotel built in 1908 or something.  The lobby was elegant.  The rooms were adequate if a bit old-fashioned.  But I think that there might have been a ghost in this hotel too.  The floorboards creaked.  Strange noises in the night.  That sort of thing.  However, nothing registered on my new Ghost-Busters EMF meter so I guess that I'm good. https://www.theastorhotel.com/about-us/

As we drove around Milwaukee, I grilled Jim mercilessly.  "Are there homeless people here?  Is there a large Black community?  What is the jobless rate?  Where can I get decent tacos!?!"

We ended up in Little Mexico.  I got my photo taken holding hands with a bronze statue of Cesar Chavez.  Tacos!  Then we drove through the Black section of town.  Large old stately homes.

"But don't let those fancy exteriors fool you.  These are the slums.  You really can't see the actual poverty here, " said Jim.  "When my parents escaped from Mississippi, they came up here because relatives had come to Milwaukee before them.  But they were red-lined and had trouble finding employment.  Segregation had followed them north.  And all these stately mansions that you see here?  They've all been divided and sub-divided and then sub-sub-divided and then even individual rooms are divided up -- so that from the outside they look good but there is a whole lot of misery going on inside them.  People are cramped together like sardines in order to afford the rent."  https://www.penguinrandomhouse.com/books/190696/the-warmth-of-other-suns-by-isabel-wilkerson/

"How were the schools?  When you were growing up here in the red-lined district?" I asked next.

"But what about homelessness?  I don't see any tents like I see everywhere in California."

"You don't see them because the police take away all the transients' stuff.  Tents are not legal on the streets of Milwaukee."  Oh.  That's one way of solving the homeless problem.  "Plus there is mass unemployment here in Milwaukee, and even before COVID.  Last September was grim." 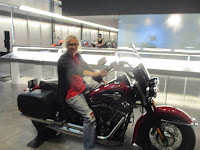 Next Jim let me off in front of the Harley-Davidson Museum.  Wow!  Every model of Harley ever made was on display, starting back in 1902.  Elvis Presley's Harley.  The Easy Rider Harley.  Videos of Marlon Brando in The Wild One!  But have you ever tried to take a selfie of yourself on a Hog?  Finally some nice lady saw my dilemma and offered to take my picture so I could have bragging rights on FaceBook -- the full effect of sitting on a Harley.  https://www.youtube.com/watch?v=_TtaSwqQAyI

Then the #80 and #30 bus took me back to my hotel, and the #14 bus took me to the Milwaukee art museum -- everything that you would ever hope that an art museum could be.  Built like a sailing ship, out on Lake Michigan.  So impressive that I even broke down and bought a refrigerator-magnet of its photo.  Marvelous exhibits.  Everything from a Pharaoh's sarcophagus to a Warhol soup can.

I personally think that beauty is the most important thing in the entire world (besides perhaps pizza).  The Navajos got it right.  Beauty is better than "war," better than greed, corruption, more greed.  Far better than the billionaire elite who lie to us and steal our souls.  https://talking-feather.com/home/walk-in-beauty-prayer-from-navajo-blessing/ 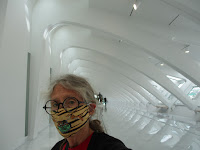 Then Jim and I had more long discussions about race.  "My parents would occasionally go back to Mississippi for reunions and stuff but they never dared to take me," said Jim.  "They knew I'd get in trouble."  Like Emmett Till?  He nodded.  "I respect others.  But I'm not going to tolerate others disrespecting me.  My parents knew that and kept me home."

Racial discrimination here?  "I just walk away.  There is so much emotion involved in that issue.  So much history of misery.  As a White person you can talk about it but you just can't understand.  The experience.  It is so very emotional of a thing.  If I let it, I would be constantly charged up all the time.  And that is no way to live.  So I just walk away."

Jim also said that because of his size, he would get challenged a lot too.  "I learned to just walk away and let God sort it all out."  But he also said that sometimes you just need to take your stand.  "Martin Luther King lived in different times than these."  Jim was a lovable tolerant bear of a man -- but just don't take advantage of that and push him too far.  Got it?  Good.

He dropped me back off at my haunted hotel where a bunch of young women were having a batchelorette party in the three rooms next to mine, a quiet one (at least they were quieter than the ghosts.)  "We're all going sailing on a boat on the lake," one bridesmaid said.  That sounds like a great idea....

The Democrats will love Milwaukee.  I already do.

Bill Gates is finally getting his way regarding population reduction.  10,000 children starve to death each month due to the lock-down.  Are you happy now, Bill?  https://www.huffpost.com/entry/coronavirus-hunger-child-deaths_n_5f1f7e9ac5b638cfec48e471?guccounter=1

A whole bunch of doctors finally get pissed off enough to tell the truth about COVID:  https://www.bitchute.com/video/PqqvcxdCGJo9/?fbclid=IwAR08ReLGr-vYkS_NNDb3irDjTug_Cze5Ws57MoJfl1HuqxVbIQHcuzbGPFU

How much do Democrats hate Trump?  Enough to accidentally murder a whole generation in order to prove him wrong?  Apparently so.  Dems need to re-think their position on HCQ at the convention.  Dems are not spozed to act like Nazis -- just to spite Trump.  https://www.newsweek.com/key-defeating-covid-19-already-exists-we-need-start-using-it-opinion-1519535?fbclid=IwAR0WGhH6FFYrsFFpOx9XFpCACU51PKFlgFMwz_kQc8rcY7hdqwOztElqc0s

COVID is being used by the Bad Guys as yet another excuse to divide and conquer us:  https://off-guardian.org/2020/07/27/the-ultimate-divide-and-conquer/

Lack of zinc in our diets also causes us to lose our sense of taste and smell.  Zinc deficiency is most common in the elderly.  Could that be one reason why they are most susceptible to COVID?  Take your zinc pills, guys.  Can't hurt.  Might help.  https://www.medicalnewstoday.com/articles/zinc-may-have-protective-effects-against-covid-19
More info on the deadly consequences of the lock-down, more deadly than the virus:
https://summit.news/2020/07/29/un-officials-cite-study-that-finds-lockdowns-school-closures-killing-more-children-than-covid/

Posted by Jane Stillwater at 6:49 AM