My trip to Dallas: Lee Harvey Oswald's big mistake was crying "Patsy" in a crowded theater!

Dallas TX is actually a far more complex, diverse, interesting and rewarding city than just merely the location where President Kennedy got shot.  But.  Here in Dallas I seem to be constantly running into reminders of that tragic and fateful day back in November of 1963.  Even my first introduction to Dallas involved driving past Parkland Hospital while taking public transit in from the airport.

"Have you gone to the top of the Reunion Tower yet," suggested one long-time Dallas native.  Okay.  I'll do that.  But, sure enough, 40 stories above the Dallas skyline there was an exhibit about the brutal murder of JFK including photos of his motorcade right before he was shot -- showing the empty back bumper where his Secret Service agents were spozed to have stood but didn't.  Shame on them.

"Did you go see the Old Red Museum?"  It was nice.  But right next to it was the Kennedy Memorial.  I stood inside it and cried while a group of millennials next to me happily snapped photos for their Instagram pages, never really understanding the dark truth of the place -- that Camelot had been stolen from them as well as from me.  Never realizing that since that time, our White House, the very symbol of America itself, has been mostly occupied by a sorry bunch of bottom-feeders such as a depressed egomaniac, a lying crook, a B-list actor with Alzheimers, two war-mongering Bush-league types, a couple of hypocrites and a reality-show host. 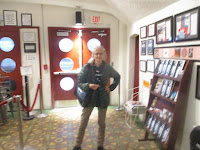 Moving on.  I'm currently staying in the Oak Cliff section of Dallas, famous for its Jefferson District, home to all sorts of delicious-looking Mexican restaurants.  I've been eating lots of tamales and street tacos and menudo and elotes.  Heavenly.  And four blocks away from me is the Texas Theater -- where Lee Harvey Oswald was arrested.  And I have the souvenir T-shirt to prove it too.

"Have you been to the Bishop Arts District?"  It turns out to be within walking distance of Oswald's former rooming house, now a museum.  But the owner wanted $40 a pop for a tour so I only took photos from outside.  And last night a Dallas TV channel showed "Jackie".  Who wouldn't cry after watching Natalie Portman desperately trying to push JFK's brains back into his head.

"Have you visited the Bush Presidential Library?"  Don't even remind me of how far we have fallen since Jack and Jackie made the White House stand for America's best self.  America has never been that great again since -- and it's certainly far from great now. 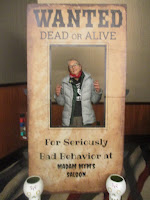 So.  Did Lee Harvey Oswald actually fire the actual bullet that murdered Camelot?  Probably not.  But he should have kept his mouth shut.  He should never have shouted "Patsy" -- thus causing the CIA, the FBI and various presidential wannabes to panic and stampede toward the exits, dragging Jacob Rubenstein along with them.  http://www.supersummary.com/libra/summary/

PS: At the wonderful BoucherCon book conference I'm attending here in Dallas, I also met author Christopher Brown and he supplied me with the perfect Orwellian word for what is happening in America both at this time and in the near future.  "Dystopia".  To quote the Lone Star Literary's review of his latest book, Rule of Capture, "Brown has taken all the dissonant noise [that is America today] and distilled it, then extrapolated to a possible logical [but horrifying] endpoint.” https://christopherbrown.com/rule-of-capture/

And the roots of America's dystopian tree started to grow even more robustly on the day that Kennedy was murdered.  And these roots have been growing stronger and stronger ever since as more and more oligarchs in Washington clearly realize that they can do almost anything and get away with it -- as long has they can generate "plausible deniability" like they did in Dallas.

Posted by Jane Stillwater at 12:07 PM