Bush's Presidential Library: What, no "Mission Accomplished" photo on display?

"I absolutely must go see GWB's new presidential library while I'm here in Dallas," I told the friend I was staying with.

"Why in the world would you want to do that?" she replied.  I just shrugged.  Is it going to make me feel any better knowing that the traitorous scoundrel who stole two (2) presidential elections, unleashed a whole new level of corruption on America, failed to stop the 9-11 madness and murdered a million Iraqis, is not rotting away in jail?

"Perhaps I could just flip him the bird?"  That probably won't happen either.  Still and all, I was determined to go see just how bad that Bush Junior's presidential library actually was.  But it was even far worse than even I had expected.  I was totally shocked.

First there was the 9-11 exhibit, making GWB appear to be the hero of 9-11 instead of the cause of it.  If only George had read his NSA briefings instead of going out for a beer with the boys.  But he did not.

Next our George shamelessly took credit for being the hero of Hurricane Katrina, even strongly hinting that it was those uppity Blacks who caused that disaster.  "It was them not me, honest!"  Say what?

Moving on to the exhibits praising George Jr's glorious triumphs in Afghanistan and Iraq.  Might he be referring to those so-called wars that Americans are still fighting almost twenty years later?  That cost American taxpayers over seven trillion dollars?  Those glorious triumphs?  Gag me with a spoon.

But wait, there's even more.  Dubya was also the hero of the environment.  And then he actually had the gall to take credit for saving our nation from financial ruin in 2008.  Shameless.

But I got my revenge -- well, sort of.  I approached almost every employee in the museum and sweetly asked, "But where is the famous 'Mission Accomplished' photo?"  Some of the employees actually had the good grace to blush.

My advice to any of you wannabe tourists in Dallas?  Don't never plan to go to the Bush Presidential Library unless you bring your own barf bag.  All those lies could make you actually physically sick. 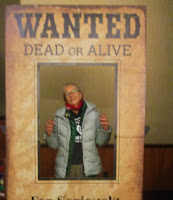 PS:  What also makes me sick at heart is that Leonard Peltier, a true American Native hero and leader, has been languishing away in various maximum-security prisons, lock-downs and solitary confinements for the last 50-odd years for a crime that he didn't commit -- while that lying bastard GWB is having a good old time living the good life in Dallas's ultra-rich Highland Park part of town.

If there was any fear of the wrath of God in America at all or any Christians left in this god-forsaken land, their situations would be totally reversed.  https://www.whoisleonardpeltier.info/

PPS:  When I was an embedded reporter in Iraq and also blogging everywhere from Afghanistan to Zimbabwe back when Number 43 was (illegally) in office, I never even imagined that America could ever manage to have a worse person in the White House than GWB....

Stop Wall Street and War Street from destroying our world.   And while you're at it, please buy my books.  https://www.amazon.com/Jane-Stillwater/e/B00IW6O1RM
Posted by Jane Stillwater at 9:53 AM