The phone rang in my hotel room in Damascus the other day.  "Get yourself down to the lobby ASAP!" said someone, not sure who.  I dashed out the door, flew to the elevator, ran to the buffet table, grabbed up some tomatoes, feta cheese, hummus and tea.  I was ready for anything!

And guess what I was ready for?  Get outta town!  Apparently President Assad himself was going to meet with us today -- trade-union representatives from all over the world.  Holy cow!  This is some heavy-duty shite.

"He will shake your hand," said the person next to me.  "There will be high levels of security involved.  In fact, an Israeli drone could even blow us all up!"  What a hot story that would be for my blog -- except that it won't happen because a fortune-teller told me years ago that I'm not spozed to die for another nine years.

I just hope that I don't blubber and drool.

And then suddenly we were all on the move.  Out the front door of the conference center.  Herded through security screening.  Boarded onto a bus.  Driven down the mountainside to downtown Damascus.  Dropped off in front of Syria's answer to the White House West Wing.  Nice carpet.  "There he is!"

And then here's me, actually shaking hands with President Assad.  "Thank you for saving Syria!" I exuded like some star-struck school-girl Beatles fan.  And then the President of Syria spoke to our group. 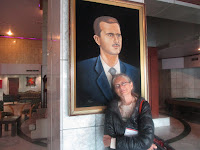 "The conflicts here are unreal," he said.  "Not that they don't exist but they are unreal in that they don't express the real interests of the working people of the world's countries.  We here in Syria try to express the real interests of working people.  That's why I'm happy to meet with you today -- because skilled workers represent the veins and the arteries of every society.  If the working class is okay, the society is okay."  Except of course in America where they are treated like disposable peons and peasants. https://www.tcfrank.com/books/whats-the-matter-with-kansas/

"War is the most important challenge for us now.  We're trying to express the interests of the Syrian people -- and for this we are paying a great price.  And all through the rest of the world as well, even including conflicts in Ukraine and the South China Sea, the same foundation is represented -- the conflict between workers and the wealthy.  All the wars are linked to this conflict.  All are interconnected."

Sad but true.  From Vietnam in the 1960s to Iraq, Ferguson, Venezuela, Yemen, Afghanistan, Palestine, Detroit, Flint and Honduras today, working people are getting screwed by the wealthy.  Woodie Guthrie was right.  https://greatsong.net/PAROLES-WOODY-GUTHRIE,PRETTY-BOY-FLOYD,109236733.html

"State presidents have become more like CEOs, working for corporations.  And if they don't pay the corporations, they will no longer be president.  In one night alone, 250 million dollars of weaponry was fired on Syria."  Who profited from that?  Trump had his marching orders for sure.

"And regarding France's President Macon?  The same thing happened.  He gave the order to attack Syria and suddenly he is a hero!  Elections are focused on financial interests alone.  In countries across the world, there have been campaigns to weaken trade unions -- so that the only ideology that remains is brutal globalization."  President Assad has been badly maligned by the Western media -- solely because he refused to go along with this program.  https://www.claritypress.com/product/axis-of-resistance-towards-an-independent-middle-east-2/

"For every ten dollars in profit, one study said that eight dollars goes to the world's wealthy.  This is a great failure because workers are not partners.  CEOs get millions, hundreds of millions of dollars at the end of the year.  The gap between producers and owners has widened."  No one in their right mind can deny this.  https://www.alternet.org/2019/06/eye-popping-analysis-shows-top-one-percent-gained-21-trillion-in-wealth-since-1989-while-bottom-half-lost-900-billion/

"In the 1970s, the workers' role in politics widened and they played a major role here in Syria.  And then we got sanctioned and blockaded.  We here in Syria have never been extremists.  But everybody else was going toward privatization throughout the world and conditions for workers elsewhere got worse and worse."

1970s?  That reminds me.  I owe President Assad an apology.  I had believed that his father was a tyrant -- but here in Syria I've been schooled with the truth.  America hated Assad's father because Hafez Assad also supported the working class.  WTF?  Even I had fallen for that cheesy American propaganda.  Sorry about that.

"We currently have a vibrant private sector here in Syria but the workers also have a big role.  We no longer have tourists or exports [due to America's proxy dirty "war" on Syria] but you can see that employees still get salaries.  Education is free here, and so is healthcare."  Wow!  I coulda had a free root canal on my sore tooth! 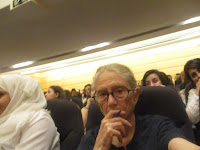 "People die for their country here because they are partners in this country -- but we don't think this [proxy invasion] will end any time soon, however, due to globalization processes."  If some strong-arm entity invaded America, would Americans drop all their petty differences, unite together and fight against the invader?  Hard to say.  We've already let global corporations invade us -- gave up without a fight.  But the Syrian people obviously have all joined forces and fought back.  Good for them.

"When workers become real partners in governing, then our work is done.  There are no conflicting interests when public interests become everyone's interests.  Terrorists and proxy terrorists will no longer exist."

Then President Assad thanked us for visiting Syria during these difficult times.  "Any questions?  Please feel safe to speak freely."  What an opportunity!  But then a lot of trade-union reps blew it by not asking actual questions but just describing themselves or making pretty speeches using diplomatic protocol.  C'mon, guys!  Ask a freaking question!  President Assad is knowledgeable, friendly, amiable and approachable.  Don't pass up this magical chance!  Don't make me stand up and ask those questions myself!

Finally the union rep from Germany asked a question.  "What about the international banking system?  How does Syria find a role outside of that?  Perhaps with the many other countries now being sanctioned?"  Good question, German guy.

"We're working on it.  The United States is now also blockading itself."  Yep, that's us -- happily shooting ourselves in the foot by declaring economic war on so many other countries, spreading ourselves too thin by declaring yet another stupid "war" that, even though it is harming Syrians now, will in the long run hurt America more.  In the future, nobody on the entire planet is gonna want to "friend" America.

"Most of the products we used to import from America, we now import from other countries.  20 years ago we would have been in trouble -- but not now.  It is a whole different world.  A network of new relations and new systems.  Russia is working on a new banking system for instance.  With every country we trade with there is a different agreement with credit lines."

I've run worn out at least two ballpoint pens in the past 24 hours alone.  This is interesting stuff.

More union reps spoke.  No more questions, however.  Mostly just  rhetorical stuff.  But then Max Blumenthal stepped up to the plate.  Oooh, this is gonna be good.  "Why has the Syrian military not hit back after all the Israeli attacks?"  Wow.  He actually went there.

"There is a plan -- America, France, Israel, etc. have cost us almost 50% of our army.  We have done much but we still have significant steps.  We need more deterrent capabilities.  We did not have significant capabilities.  They had material and capabilities but we have a long-range plan."  Yeah what!  The American bullies picked on Syria just because they could -- but at great cost Syria has actually fought back.  American schoolyard bullies and their ISIS proxies weren't expecting that.  Humph.

And an Iranian union rep finally came up with a good question too.  "What's happening in Idlib and what about sanctions?  How do you face sanctions?"  https://www.youtube.com/watch?v=pz_7ZUmmTzQ&t=5s

"We will liberate every part of Syria," the president answered.  "The stages of our plan will continue to liberate us all.  As for the U.S. airstrikes, they said that they attacked al Qaeda but they actually made attacks against us.  Some Syrians have acted against their own country but most are highly patriotic.  We can talk about a real victory, however, only when we can make independent decisions -- but at this point the American financial powers are greater than in Europe so America is still the policy decider.  As for sanctions, the U.S. still has a monopoly on technology.  10% of Air Bus parts are American."

Syrians clearly love Syria under President Assad.  For instance, over 390,000 Syrian refugees and some 1.3 million internally displaced persons have returned back home just since last year.  They don't want to hang out in Europe or Jordan or even Lebanon.  They want to be safely back home with President Assad.  They vote with their feet.  https://thinkprogress.org/17-million-americans-purged-from-voter-rolls-between-2016-and-2018-new-report-finds-38c2c5c3124b/

"The next step should be restoring Syria's infrastructure.  We have a common vision.  We can't wait, can't change anything by criticism...."  I missed what President Assad said next because my translation transmitter just turned off.  New transmitter.  Problem solved.

"Workers' unions are very active in Syria.  They act as advocates.  They are financially organized and cover all of the country even to the remotest village.  They have excellent pension plans and give workers vacations and healthcare."

In fact, before being cruelly invaded by American, Zionist and Saudi proxies, Syria was well on its way to being one of the most advanced countries in the world.  I read somewhere that before America and its terrorist proxies invaded it, Syria was ranked number ten worldwide in something or other.  Healthcare?  Education?  Good stuff like that.

Hell, the main reason that America demanded "regime change" in Syria seems to be that all those green-eyed monsters in DC simply got too jealous for their own good.  "What's mine is mine -- and what's yours is mine too."  It's okay for toddlers think like that -- but shouldn't we expect more from our national leaders?  Right now, President Assad is looking more and more like the kind of guy that we would like to have as a president.  Not an "evil dictator" at all, President Assad actually is the working-class hero that Trump pretends to be.

And in another comparison, the U.S. House of Representatives is currently considering impeaching Donald Trump for some dumb-arse thing that he said in a phone call.  But what about all the horrible and barbaric murders he committed in Syria?  Or even his many deplorable crimes against America workers?  How come no one is impeaching him for that?  https://theintercept.com/2019/10/02/trump-impeachment-civilian-casualties-war/

PS:  While I was shaking hands with the honestly-elected President of Syria, someone took a photo of us.  So.  If anyone has a copy of said photo, pleeze let me know.  Gotta hang it on my wall.  Gotta put it on my FaceBook page!

Stop Wall Street and War Street from destroying our world.   And while you're at it, please buy my books.  https://www.amazon.com/Jane-Stillwater/e/B00IW6O1RM
Posted by Jane Stillwater at 10:58 AM