Syria: Eating the Kurds -- and why

What's with Donald Trump?  Is he really all that stupid?  Or just playing with us like a fox in the hen house?

I recently went to a guest lecture at the University of Damascus, given by visiting Australian professor Tim Anderson.  There were approximately 600 students in attendance -- not counting the balcony seats.

Professor Anderson is an acknowledged expert on Syria.  "But I couldn't even get my books published in Australia."  Sounds typical.  Tell the truth and shame the media?  Never a safe idea.  Just ask Julian Assange, Chelsea Manning and Edward Snowden. 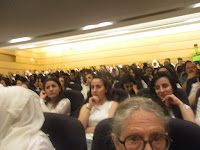 "I don't believe that Trump is a stupid man," said the professor, "but the system is making him stupid.  There is a great deal of cynicism in Washington.  They say one thing and do another.  For instance, America funded and weaponized ISIS.  It's all documented."  https://www.goodreads.com/book/show/29058214-the-dirty-war-on-syria-washington-regime-change-and-resistance

After the lecture, I found a tiny little ice cream shop in the Old Damascus souk and thought about what the professor had said -- in view of this latest Turkish invasion against Syrian Kurds.

No, Trump isn't stupid.  While on the surface he appears to finally be doing the Christian thing and pulling American troops out of Syria where they never belonged in the first place.

But Trump is acting stupidly -- like a fox, a fox in the hen house.  Not Christian at all.  And the Syrian Kurds are his chickens.  They were told that they weren't but they are.

And Trump has just left the Kurdish hen house unlocked.

And yet....  And yet Americans seem to actually hate Trump for endangering the Kurdish chickens, right?  But.  When your goal is to turn all of independent wonderful Syria into Kentucky Fried Chicken, then leaving the Kurdish hen house unlocked is the wily thing to do.  A Kurd is a Kurd, sure, but the bottom line is that a Syrian Kurd is still a Syrian.

And Trump the Fox is set on having President Assad for his Sunday dinner.  How ironic.  Right after he and Melania get back from church.

President Assad is a good guy who has been lied about and maligned by American media -- both Left and Right.  But it's hard for most Americans to see the president of Syria as a good guy when Trump's swamp in Washington can only see him as dinner.

To paraphrase what else Professor Anderson said in his lecture, "If chickens ever want to stay safe, they need to stick together."  For Christ's sake, yes!

PS:  At the university president's reception, I was amazed and pleased when they served us Ferrero Rocher chocolates.  See?  The Syrian chickens have more in common with us American chickens than you would think.

Stop Wall Street and War Street from destroying our world.   And while you're at it, please buy my books.  https://www.amazon.com/Jane-Stillwater/e/B00IW6O1RM
Posted by Jane Stillwater at 10:50 AM