In his latest book, The Management of Savagery, Max Blumenthal gently reminds us of the obvious -- that savagery can never be managed.  Once you let the monster out of the bag, it can never be put back inside again.  https://thegrayzone.com/2019/06/14/syrian-network-for-human-rights-opposition-snhr/

This truism is clearly obvious to even the dimmest bulbs on the porch -- unless of course you are either delusional or in charge of America's foreign policy.  "They may be monsters but they are our monsters."  I forget who said that.  Perhaps Osama bin Ladin's first American handler back in the good old mujaheddin days?
http://syria.trendolizer.com/2019/09/visit-to-syria-the-reality-our-media-wants-hidden.html

"I want to go to Douma and Yarmouk today," I said to the desk clerk at my hotel in Damascus.  "How can I get there?  Take a taxi?"

"You could -- but it would be expensive and take you over an hour each way.  But why would you even want to go there?"

"To see the very place where the American media made up all those lies about President Assad using chemical weapons of course," I replied.  https://www.claritypress.com/product/axis-of-resistance-towards-an-independent-middle-east-2/

"We have a tour bus leaving for Maaloula in a half-hour.  If you are desiring to see some war-torn ruins, that would be a good place to start."  Plus the tour bus was free.  Sure.  Sign me up.  I got onto the bus.

"Maaloula is a rocky cliff-side town famous for its ancient Christian monasteries," said our tour's organizer.  "Legend has it that St. Martha herself retired there in 40 A.D.  Residents of Maaloula still speak Aramaic."  Geez Louise, this town is out in the middle of nowhere.  How did Saint Martha even manage to find the place?

"During the proxy invasion of Syria, the Saudis, Americans and Zionists supported a gang of al-Qaeda-slash-ISIS 'rebels' who terrorized this town.  See that arched gate over there?  An ISIS suicide bomber blew it up first, and then ISIS berserkers rampaged throughout the city."  https://www.globalresearch.ca/us-eastern-syria-relies-isis/5672489

Don't you just hate hypocrisy?  When elected officials in Washington constantly claim ad nausea to be morally holier-than-us just because they name-drop the God-word on TV all the time -- all the while secretly supporting al Qaeda and ISIS on the down-low?  That's totally un-Christian behavior. 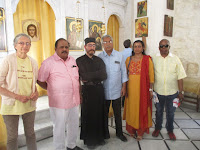 But if Jesus ever had to make a choice between siding with Saint Martha and the Arab Christians of Maaloula or else siding with the heinous American, Saudi and Zionist criminals who support ISIS?  It's clearly a no-brainer who he would choose!  And all those phony American "Christians" who always continue to elect and re-elect butchers like Reagan, Clinton, Bush, Obama and Trump?  They ought to be ashamed of themselves.  And Jesus is clearly ashamed of them too.  https://www.globalresearch.ca/the-relationship-between-washington-and-isis-the-evidence/5435405

As our brave little bus slowly drove up the steep narrow winding streets of Maaloula, we could still see what was left of various bombed-out homes, shops and holy places, still clinging precariously to the cliff walls.

"Al Qaeda forces then asked their Saudi handlers what to do with the residents of Maaloula.  'Kill them all,' came the reply."  Even the U.S. media had a hard time pretending that these butchers were "rebels" and "freedom fighters" -- but even the New York Times managed to pull it off.  And NPR actually had the nerve to insinuate that these al-Qaeda-slash-ISIS "rebels" were actually saving some brutally kidnapped nuns, not holding them hostage.  https://www.npr.org/sections/parallels/2013/12/19/255548730/rebel-leader-nuns-were-led-to-safety-not-seized-in-syria

Our tour bus continued to wind its way up the steep hillside streets of Maaloula until we finally came to yet another bombed-out building on the mountaintop.  "This used to be a nice hotel for pilgrims," said our guide. 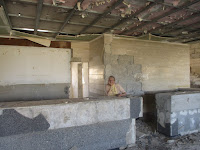 The bombed-out hotel was made even sadder by the sight of the twisted steel of partially-destroyed playground equipment in front of it.  A mangled slide.  A broken teeter-totter.  Some metal springs that used to hold up bouncy plastic animals for kids to ride on -- you've seen stuff like that in almost every park in America.

"I came here two years ago," said one of the tourists in our group.  "Much government-sponsored restoration work has been done on the monasteries and churches since then."

But wait!  It's hot outside.  Is anyone selling ice cream in Maaloula?  Yes?

Like Jesus resurrecting from the grave, this wonderful town is in the process of restoring itself.  Thank goodness that ISIS is gone!  The Saudis would never have let me eat ice cream.  https://www.goodreads.com/book/show/29058214-the-dirty-war-on-syria-washington-regime-change-and-resistance

Managing savagery is an impossible task.  Americans need to finally realize that and stop arming and training all of their barbaric al-Qaeda-slash-ISIS savages.  But first things first.  How do you say "ice cream" in Aramaic?

PS:  I can never really take any of my fellow Americans' petty complaints about their lives seriously any more -- not after having seen all the pain and suffering that America's dirty proxy "war" on Syria has brought to Maaloula.

Stop Wall Street and War Street from destroying our world.   And while you're at it, please buy my books.  https://www.amazon.com/Jane-Stillwater/e/B00IW6O1RM
Posted by Jane Stillwater at 11:25 AM