White Helmets: Something wicked is coming our way

What's your worst nightmare?  That you drive over a cliff after your brakes fail?  That Jurassic World's T-Rex chases you down the street?  That you are forced to become a Republican (just kidding) -- or that a former member of ISIS moves in next door?  https://www.youtube.com/watch?v=1FJD7jZqZEk

Perhaps Freddy Kruger won't actually be showing up in real life instead of only in your nightmares -- but if you live in Canada, England or Germany, you actually could wake up one morning soon to find a moving van pulled up next door and see a living breathing member of ISIS or al Qaeda step out -- courtesy of the U.S. government, Theresa May, Israel, the United Nations and NATO.  https://www.globalresearch.ca/immigration-western-wars-and-imperial-exploitation-uproot-millions/5645586

Yep.  Something wicked is truly coming our way:  The White Helmets.  https://www.youtube.com/watch?v=rz2wo9irW6k

American propagandists have tried for years now to whitewash these guys' blood-red helmets, even awarding them an Oscar.  But anyone who makes even the slightest effort to follow the money in the Middle East these days knows that the White Helmets are just the propaganda branch of ISIS and al Qaeda.  https://www.rt.com/news/433924-white-helmets-evacuation-israel/
According to Middle East expert Paul Larudee, "The White Helmets' brand name is being freely used for all of the terrorists leaving Syria right now because that name has been bleached beyond all recognition by their propaganda team.  In effect, these terrorists have all adopted the name of their propaganda team when they are not even that. 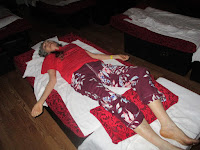 "The impact of giving them that name has been to change this rescue of some of the worst criminals on earth into a heroic humanitarian effort and to make them worthy of being lionized wherever they go (as soon as they wash the blood of Syrian women and children off their hands and allow their ears to stop ringing from the screams of their victims).  The White Helmets are the PR team for some of the worst terrorist filth on the planet.  It's not the PR team that's being rescued, it's the filth for whom they are the PR team; terrorists who are using the WH brand name so that not too many people will ask who they really are."


If your next-door neighbor says that he or she is a Muslim, honor that fact and just feel lucky that you now know someone with high religious values.

But if that new guy on your block starts bragging that he is a White Helmet, be very afraid.  And then send him packing -- back to Riyadh, Tel Aviv, Langley and 10 Downing Street where he belongs.  https://www.ukcolumn.org/article/last-spasm-british-imperialism-middle-east

PS:  Here's a breaking news report that just came in from Irish journalist Finian Cunningham:  "Western states made a dramatic intervention in the Syrian war earlier this week to extricate hundreds of terrorist militants.  The militants are to be fast-tracked for resettlement in Europe and Canada.  But in saving their terror assets, Western governments are risking future public safety as well as sowing seeds for increasing multicultural strife.

"In a stunning revelation of the foreign links to the extremists in Syria, Israeli Prime Minister Benjamin Netanyahu ordered his military forces to evacuate up to 800 [terrorist] militants belonging to the so-called White Helmets.  They are the propaganda merchants for Nusra Front and other al-Qaeda-linked terror organizations."  Cunningham also posts video proof of WH terrorism as well.  Not for the faint of heart.

And then Cunningham goes on to say, "The United States and Israel are not taking any of the 800 militants for resettlement.  Independent investigative journalist Vanessa Beeley, who has done much to expose the real macabre nature of the White Helmets and their terror links, says that both the US and Israelis no doubt realize that by taking in such 'war refugees' they are inviting terrorists into their own societies."  https://www.strategic-culture.org/news/2018/07/24/western-states-salvage-terror-assets-in-syria.html

Whew.  At least America is safe.  For now.

Stop Wall Street and War Street from destroying our world.   And while you're at it, please buy my books.  https://www.amazon.com/Jane-Stillwater/e/B00IW6O1RM
Posted by Jane Stillwater at 2:29 PM