Madam Jane predicts: "You're in the poorhouse now..."

Madam Jane invited me over for high tea yesterday -- even though she was on a gluten-free kick and the petit-fours were all made from almond flour.  I ate them anyway.  Not bad.

"In the future," said Madam Jane, "things are going to be different."  Of course they will.  It's the freaking future.  Duh.

"The most successful nations in the future will only be those who encourage the abilities of all of their citizens."  Well you surely can't say that is true about America right now, a country that has systematically ground down the human potential of its Black people, Native Americans, women, Latinos and even poor White people -- systematically ground that potential right into the dirt.  Everything tangible and even intangible here has been systematically stolen, funneled, gambled, stripped, given up and/or handed over to America's very top elite.

"A nation that eats its own cannot last," continued Madam Jane.   Oh hell.  I don't want to be anybody's lunch.

"At this point in time it pretty much looks like America's military power will rule the world forever -- both at home and abroad.  But that's just silly."  Silly? 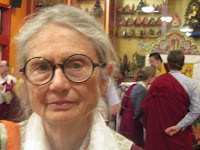 "It's just plain silly to think that America's Nazi-like domination will last forever.  All people, whether they are Christians, Muslims, Jews, Buddhists, Hindus or even atheists, will simply get tired of being hit over the head and bossed around.  Americans will ultimately end up going from being the world's dominant boss-men to living in the world's biggest poorhouse.  You heard it here first."

"Very interesting," I replied.  "Thank you for that amazing prediction.  Are there any petit-fours left?"

Stop Wall Street and War Street from destroying our world.   And while you're at it, please buy my books.  https://www.amazon.com/Jane-Stillwater/e/B00IW6O1RM
Posted by Jane Stillwater at 1:30 PM