Rosie the Riveter, public transit, climate change and YOU

Last week I stayed up late two nights in a row while happily stepping into the vividly-described world of Betty Reid Soskin's wonderful new memoir, "Sign My Name to Freedom". https://www.barnesandnoble.com/w/sign-my-name-to-freedom-betty-reid-soskin/1125684317#/

The last several chapters in Soskin's book tell us all about her work at the "Rosie the Riveter" Home Front National Park in Richmond CA, and her descriptions of the park and its museum are so enticing that I immediately ran right out there.  I caught the bus -- and public transportation dropped me off practically right at the museum's front doorstep, even better than Uber.  Plus I get my best reading done on public transit.  Plus subways and buses are doing a lot toward preventing climate change from raging too far out of control too soon (please wait until after I die before allowing it to destroy the world!)

Another thing Soskin writes about in her book that thoroughly moved me were her descriptions of the amazingly unified cooperation between every single man, woman and child in America in order to "do the damn thing" and win World War II, making the world safe from German fascism (although unfortunately WW II didn't manage to keep us safe from American fascism.  Sigh.)  https://www.youtube.com/watch?v=DRTttyZ-MDk

At the end of her book Soskin also points out that if Americans could so completely mobilize and commit themselves in the battle against Hitler, then surely we Americans can also completely mobilize and commit ourselves against an even greater danger -- climate change.  Think about that for a minute.  But don't think too long.  Our last window of opportunity is rapidly closing.  Now is the time to act.  https://www.msn.com/en-us/weather/topstories/american-cities-that-will-soon-be-under-water/ss-AAyRWxS?ocid=spartanntp

Like what happened all across America back in the 1940s, we all gotta sacrifice in the face of a huge common danger and act outside of our own individual self-interest in order to save the whole freaking human race. 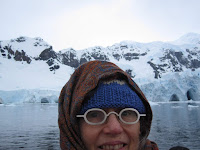 According to climate-change expert Robert Hunziker, there are currently three (3) ecological monsters heading our way.  "The three monsters are: (1) A State Shift in the biosphere [AKA a planetary tipping point from which there is no recovery]; (2) Human-caused greenhouse gases which alter the planet, disrupting the Holocene Era of 10,000 years of Goldilocks’ climate, not too hot, not too cold; and (3) Collapsing ecosystems 100% due to human footprint, inclusive of excessive toxic chemicals galore, worldwide."  https://www.counterpunch.org/2018/07/03/three-climatic-monsters-with-asteroid-impact/

But does all this horrific new information leave us with any hope for the human race at all?  Yes it does -- but only if we mount an immediate, all-out assault on extinction prevention.  And, to quote Rosie the Riveter, "We can do it!"  We just have to.  There is no other rational choice.

PS:  The number-one cause of climate change right now is "war".  Sorry guys but America, Israel, NATO and the Saudis need to hand over all their "war" toys to the scrap drive if the human race is ever to survive.  https://consortiumnews.com/2018/07/14/clinging-to-collusion-why-evidence-will-probably-never-be-produced-in-the-indictments-of-russian-agents/

And everyone in America seems to be working overtime to hype up the chances of "war".  All of FaceBook is currently blowing up with hatred of Russia.  Hating Russia is not gonna save us.  I already lived through the 1950s and do NOT want to do it again.  Be careful what you wish for.  McCarthyism sucked eggs.   No one was "saved" by hating Russia then and it's not gonna work now either.
http://www.theamericanconservative.com/articles/war-doesnt-make-sense-anymore/


Plus I also would prefer not to get fried like an egg on my own sidewalk by a Hot War with Russia, China and/or Iran either -- just because some greedy warmongering idiots in the media know not what they do.

And let's also consider all those "liberal" Americans who had the good sense to be horrified by that dangerously trumped-up 1950s Cold War and then horrified again by those pricey and wholly-invented 21st century "wars" on Iraq, Libya, Syria, Palestine, Yemen, Honduras, Ukraine and  Afghanistan.  Unbelievably, they too are falling for all of this new "hate Russia" crap.  Perhaps they just can't wait to get blown up and/or radiated to death by a thermonuclear "war" on Russia -- but I can.  Isn't being seriously endangered by climate change scary enough? https://www.globalresearch.ca/immigration-western-wars-and-imperial-exploitation-uproot-millions/5645586

Stop Wall Street and War Street from destroying our world.   And while you're at it, please buy my books.  https://www.amazon.com/Jane-Stillwater/e/B00IW6O1RM
Posted by Jane Stillwater at 10:26 AM