I'm still fascinated with the people of Oklahoma.  The majority of them are good people, salt of the earth, friendly and hard-working.  So how come so many Oklahoma residents seem to have such a grudge against Blacks, immigrants, women, liberals and gays?  In her new book, Strangers in Their Own Land, sociologist Arlie Russell Hochschild just answered my question neatly.

According to Hochschild, Tea Party members strongly believe that they have been robbed.  And how did they jump to this conclusion?  Easy.  The way that they see the world around them is that, for years and years now, they have been patiently standing in some allegorical line, patiently waiting to reach the American Dream by dent of hard work.  They have been working their fingers to the bone for most of their lives to obtain the American Dream -- but even now, after all these years of labor, it is still just over a hill and out of sight.  And so they work even harder and wait even longer. http://thenewpress.com/books/strangers-their-own-land

But then, just as this allegorical line is actually starting to move, the places directly in front of them are suddenly flooded by a whole bunch of undeserving, lazy and rude people who are using affirmative action, welfare, women's rights, etc. to jump the line.  And so, instead of moving forward toward their Dream goal, Tea Party members now find themselves stalling in place -- or even starting to slip backwards. "Hey, that's not fair!" they cry in frustration.  "We worked hard to get here and you have done nothing."  And just who, exactly, is helping these new loafers to jump the line?  The Government, that's who.  No wonder Tea Party members are pissed off at government, if seen from this point of view.

But now let's just take a few steps backward, get a larger perspective and look at the entire globe instead -- using this new "Standing in line for the Dream" point of view and applying these same Tea party thought-patterns to the entire human race.

Cherokees in Tahlequah, Oklahoma, for instance, have been standing in line for the "American Dream" since 1492!  Or at least since the Trail of Tears brought them here to Oklahoma.  Back then, it was the white settlers who had jumped the line.  Violently.  No wonder the Cherokee were (and still are) pissed off. 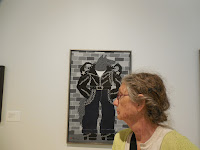 Or take Mexico and Africa and Peru and India and China -- filled with people happily pursuing the Mexican, African, Inca, Indian and Chinese Dream.  Or whatever.  And then suddenly white colonialists arrived, cut into their lines too and stole all of their dreams.  And so, as a result, native inhabitants of these countries also formed Tea Parties of their own.  The Boxer Rebellion, for instance.  Montezuma's Revenge.  The Zulu uprising.  Remember the Alamo?

And, today, we now have the American, Saudi, UN and Israeli neo-colonialists doing the same freaking thing that the old colonialists used to do.  Now they too are jumping ahead in the line.  No wonder the Libyans, Afghans, Palestinians, Yemenis, Iraqis, Ukrainians, Vietnamese, Koreans, Congolese, Haitians, Somalis, Hondurans, Chileans, etc. are pissed off, and are also forming their own "Tea Parties" right and left.  Can you seriously blame them?  Hardly.  They are doing exactly what America's Tea Party members are doing right now and, to quote Ginger Rogers, they are "doing it backwards and in high heels".  http://zope.gush-shalom.org/home/en/channels/avnery/1493999002

Let's take a closer look at Palestine.  Palestinians were all happily living the Palestinian Dream.  And then suddenly Israeli neo-colonialists not only rudely cut into their line but also stole the entire Dream itself and now it has become the Israeli Dream.  Palestinian water is now Israeli water.  Gaza oil is now Israeli oil.  Israelis live their Dream at the expense of the Palestinians.  No wonder there is a Palestinian Tea Party.  https://mikopeled.com/2017/04/27/the-holy-grail-by-miko-peled/

And take Syria.  Syrians were happily living their Syrian Dream too -- historic cities, great education and healthcare systems, a president who they supported.  And then suddenly American, Israeli, Saudi and Turkish neo-colonialists cut in line bigtime and tried to steal the Syrian Dream, using ISIS and al Qaeda aka "moderate rebels" as their cats-paws and shamelessly arming these monsters with the goal of slaughtering as many Syrians as possible and stealing their soil and their oil.  No wonder Syrians formed their own Tea Party!  http://www.globalresearch.ca/now-only-rational-thinking-can-save-the-world/5584987

Now that I've read Hochschild's book, I can look at our American Tea Party members from a whole new perspective and can even sympathize with their problems.  And, hopefully, now American Tea Party members can also look at the American military-industrial complex with new eyes as well -- and start identifying with Palestine and Syria instead of with the American Deep State neo-colonialists who are the real line-cutters here.  If Wall Street and War Street didn't steal over 90% of America's wealth for themselves, there would still be plenty of money for the government (or the free market or whatever) to give everyone a slice of the American Dream.  http://www.counterpunch.org/2017/04/28/middle-eastern-surgeon-speaks-about-ecology-of-war/

PS:  And does anyone but me find it ironic that Blue States rightly consider Red States to be the ones rudely cutting in line?  Red States receive the most welfare, demand that the government spend astronomical amounts of money on murdering beautiful babies in the Middle East, claim to be the most moral while at the same time acting the least Christ-like, want less government but saddle the Blue States with the most corporate-biased government regulations since the Age of Robber Barons, want to spend the Blue States' hard-earned money on junk like a Wall, and generally are "poor me" takers who constantly jump the Blue State line to the American Dream.

That's not my American Dream.  My American Dream involves Democracy and Justice and Freedom.  But who the freak is truly free when enslaved to making car payments and murdering babies in the Middle East?

Stop Wall Street and War Street from destroying our world.   And while you're at it, please buy my books!  http://straitwellbooks.blogspot.com/2016/04/our-top-best-seller-right-now-is-bring.html
Posted by Jane Stillwater at 11:25 AM