Tulsa is an amazing place.  Nice people, fabulous museums -- and it also has a great country-music station.  Who knew that I would fall in love with Tulsa.  Totally enjoyed the Gilcrease Museum, built by the wealth of Oklahoma oil.  It has all kinds of American Indian stuff and Remington stuff.  Plus it's set in those impossibly green Oklahoma hills. 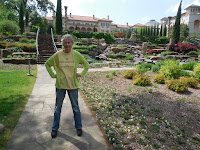 Then there's the Philbrook Museum.  Think "Phillips 66" oil.  Back in the day, wealthy oilmen wanted to leave their legacy in Art and Beauty -- not in the broken and bloody bodies of beautiful babies in the Middle East.  Apparently, Mrs. Phillips' main goal in life was to surround herself with Beauty everywhere she looked.  And boy did she succeed.  I want that to be my main goal too!  Only within a much more limited budget.

Touring the museums of Tulsa has developed within me a hunger, an absolute craving, for beauty and art and culture.  Go Tulsa!

And then there's the country music.  I put 400 miles on my car while driving around Tulsa and then driving from Tulsa to Stillwater (just had to go there for obvious reasons) and to Tahlequah, Catoosa and Muskogee.  I hate to drive.  All that driving would have been torture if it hadn't been for KVOO, the local country music station.  http://www.kvoo.com/listen-live  All I can say is live-stream it, tape it, put it in your car stereo and then drive.  Trust me on this one.  Country music is perfect for hitting the road.  https://www.youtube.com/watch?v=z30z8ZnM73U

And another thing I learned from Tulsa and listening to country music:  People here work hard, play hard and are the salt of the earth -- and are also as independent as hell.  Lauren Alaina's song, Road Less Traveled, could be the national anthem for resistance to authority and conformity.  The American Left's "Resist" movement could do well to adopt it as their theme song.  "If you trust your rebel heart, ride it into battle.  Don't be afraid, take the road less traveled..."  https://www.youtube.com/watch?v=j-NAEvc-b6E

Country singers tell stories about living on bar stools and hanging out with loose women, sure, but they also tell stories about the blue-collar men and women who work hard for a living and pour their hearts into their lives.  https://www.youtube.com/watch?v=gCxbgqyC2Wg

And they also vote for the Tea Party and Donald Trump -- who then sells them out to Wall Street and War Street without batting an eye.  That's just inhuman and cruel.  And, what is even worse, America's military-industrial complex has gone out of its way to make sure that working-class white people and people of color and immigrants and women never bond together over their vast ocean of similarities but instead fight each other to the death over their insignificant differences.  http://www.paulcraigroberts.org/2017/04/24/911-destroyed-america/

The only problem with Tulsa, as far as I can see, is that it is a city where you can't survive without a car.  And it is a consumer city too.  Consumerism rules here in Tulsa.  If we have another Great Depression, all these malls and big-box stores here will become ghost towns -- just like when silver dried up in the Old West.

But I digress.  Let's get back to talking about how the Tea Party failed its rank & file.  According to sociologist Arlie Russell Hochschild, rank-and-file Tea Party members basically want a less corrupt government and less regulation.  But it is their "Great Paradox" that they vote for the most corrupt politicians and also for even more regulation -- but only for Blacks, women and immigrants.  http://thenewpress.com/books/strangers-their-own-land

The average Tea Party member also wants respect.  They want liberals to stop thinking that they are just stupid hillbillies.  They are not.  And yet it is the neo-con politicians they vote for who treat them like rubes, suckers and pawns when the rubber actually hits the road.  Go figure.

Posted by Jane Stillwater at 12:16 PM