"War" and the next American generations

At a conference in Washington DC recently, military analyst John Mearsheimer spoke about the future of Israel and Palestine.  He told us that Israel's future funding by America is secure because AIPAC, Israel's all-powerful lobby, focuses "on the elites in America, not the rank and file.  The elites here are still afraid of the Israel lobby and so the lobby is still as powerful as ever...because it focuses its attention on keeping our country's elites in line."

But Mearsheimer also said that there are dark times ahead for both Israel and its lobby, due to Israel's neo-colonialist leaders who are strongly pushing a rightist policy of apartheid.  "Israel is not likely to ever become a liberal democracy," said Mearsheimer, "and it could take 20 or 30 years to resolve this conflict [between Israelis and Palestinians].  The decades ahead will be miserable and will also harm America's politics."

So much for Israel's future.  But what about the future of America?  What lies ahead for us in the next decades?  What happens next here -- aside of course from Trump's constant rude slouching toward World War 3?  http://www.truth-out.org/news/item/40222-new-revelations-belie-trump-claims-on-syria-chemical-attack#14924552943921&action=collapse_widget&id=0&data= 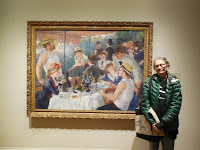 Generation Z, the post-2001 generation, will come of age -- that's what happens next.  Generation Z is apparently different from the Millennials in several ways.  They are even more tech-savvy than Millennials for one thing (none of them are techo-dunces like me).  Apparently they are also better focused, more avid consumers and more worried about finding a job.  But what worries me most about this next generation is their name.  "Generation Z," end of the alphabet.  Are they really gonna be our last generation -- as their name implies?  That could actually be the case.  http://www.huffingtonpost.com/george-beall/8-key-differences-between_b_12814200.html

"But why would you be thinking that?" you might ask.  Why?  Because America just dropped the "Mother of All Bombs" on Afghanistan and just turned Syria into Ground Zero as well -- which means a whole bunch more air pollution has just been created, that's why.  Climate-change deniers aren't just huge corporations hoping to pollute our air and water for fun and profit.  The biggest polluter in the world is the American military.  So climate-change denial really benefits weapons manufacturers and "war" profiteers the most.  And it benefits Generation Z the least.

But there is still hope yet in this tired old world -- and it comes from a rather unexpected source:  Babies!  Have you noticed how many parents have been winning the Baby Lottery bigtime lately?  Giving birth to little Jesus-type babies, little Buddhas?  Here is our hope.  Not in a stronger military, not in dropping bombs all over the world, not in Israel's sleazy apartheid system or the invasion of Syria or Iraq or Libya or Ukraine by the power-crazed madmen inside Washington's Beltway -- but in our babies.

Let's not let Generation Z be our last generation.  Forget about all this endless cheering for "war".  Let's cheer for our babies instead.  http://www.counterpunch.org/2017/04/18/mother-of-all-hypocrisies-trump-cares-for-some-syrian-babies-not-others/

PS:  Why does Trump keep bombing the shite out of the world?  One reason might be that he's bored.  When one has as much money as The Donald is rolling around in daily, there just aren't many challenges left.  So making things go "Boom!" might liven up his day.  Mr. President, isn't golf enough?  Apparently not.  http://www.esquire.com/news-politics/news/a54564/the-violent-clashes-in-berkeley-werent-pro-trump-versus-anti-trump/

PPS:  As for all this talk about eliminating birth control, does America's Alt-Right really want to go there?  I always thought they were just racist fascist-wannabes but maybe they aren't racist after all if they are all excited and pleased about producing more minority babies.  Maybe I judged them wrong.  But hell, the more minority babies the better.  Jesus was once a minority baby.  So was Buddha.  http://www.paulcraigroberts.org/2017/04/15/a-government-of-morons/

Stop Wall Street and War Street from destroying our world.   And while you're at it, please buy my books!  http://straitwellbooks.blogspot.com/2016/04/our-top-best-seller-right-now-is-bring.html
Posted by Jane Stillwater at 8:25 PM