Being a tourist in Washington DC can be a truly glorious experience -- or not.

The area known as the Federal Triangle features a collection of magnificent granite buildings, and tourists and locals alike are in awe of such splendor -- until I realized that the crown jewel of all this architectural awesomeness is a building now named after a war criminal.  Ronald Reagan.  http://therealnews.com/t2/index.php?option=com_content&task=view&id=31&Itemid=74&jumival=15924

In the early morning light, I went out to see the breath-taking Iwo Jima memorial.  It was large and impressive and humbling and brought tears to my eyes -- until I noticed that all around the base of the statue, etched in gold letters, were listed some of the many many many "wars" that Marines had participated in, including disgraceful and bloody actions against the Philippines and Haiti.  But the list stopped at Somalia.  Guess there was no point in adding Afghanistan, Iraq, Ukraine and Libya, seeing as they are still on-going money-pit "wars" and still a source for the incubation of terrorists.  To paraphrase the Marines' anthem, "From the Halls of the Munich Olympics to the shores of 9-11, London, Madrid, Paris, Beirut, Baghdad, San Bernardino, Brussels and Kabul".

To quote journalist Finian Cunningham, "More than grieving, European [and American] citizens need to get a grip and hold their governments accountable for not just Europeans [and Americans] suffering terrorism but for suffering under the same terrorism in many other countries as well.  Maybe when the Eiffel Tower displays the national colors of Afghanistan, Iraq, Syria, Palestine, Mali, Yemen or other unfortunate victims of terrorism, especially state-sponsored terrorism, then the grieving process might acquire a more constructive purpose."  http://sputniknews.com/columnists/20160324/1036899417/brussels-atatcks-europe-grief.html  But I digress.

In Washington DC, the Metro subway system is amazing, taking you everywhere that you need to go -- until at the Rosslyn station I experienced deja vu as I took an escalator down down down, three or four stories under the ground.  This was just like the escalator to a subway station at Pyongyang, North Korea -- which was built to also serve as a bomb shelter.  Apparently DC is also ready for war.  If you happen to be in the Pentagon area at the time of an attack from any of the long list enemies that the Pentagon has created, no worries.  Just head for the Metro.

At the Pentagon City Metro stop, they have a fabulous mall and I was also impressed by it, clearly a mall worth fighting for -- until I saw an electronic billboard that said, "Congratulations, Marines.  The F-35B is now operational!"  Now there is a picture worth a million lives.  Plus Lockheed Martin can now blame Marines for the 391 billion taxpayers' dollars that have been wasted on the F-35A-Z.

Then I saw the U.S. Capitol's shining dome from afar -- oops, no longer shining.  It was covered with what looked like black garbage bags.  Huh?  Since all of America's money is now going to "war," even one of our most treasured national infrastructure icons has come to this? 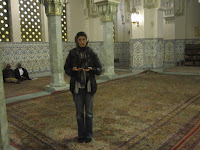 Then a friend took me to the most beautiful mosque in the District -- but if the current crack-down on freedom of religion continues apace, then before we know it, Christianity, Buddhism and Judaism could easily get cracked down on too.  That's a very dangerous precedent to set.  But then the Christianity of Jesus that I have come to know and love, already no longer exists either, having been replaced by bigotry and hate.  http://www.investigaction.net/Brussels-attacks-no-Mr-Prime.html?lang=es

Then I visited the Newseum, a heart-warming tribute to American journalism.  It was housed in a beautiful new and modern building -- but its displays were truly depressing.  Its display of Pulitzer-Prize-winning photos only reminded me of war, war and more war.  The exhibit on Vietnam reminded me of all the abject horror that America is capable of creating in foreign lands.  And the exhibit on civil rights in the 1960s reminded me of America's excellence in producing injustice.  How can we even dare to export claims of "Humanitarianism" and "Democracy" after seeing this exhibit of what life was (and still is) like for minorities here at home.

But I should have known from the start that Washington DC was going to be a contradiction and a conundrum when I flew into "Ronald Reagan Airport" -- named after a man who almost single-handedly started our country on a downward spiral of cruelty, inhumanity, lies, "war" and economic collapse.  Does this mean that Congress is going to have to change the airport's name again too?  To the "Reagan Bush 1 Bush 2 Obama Clinton 1 Clinton 2 Trump War Criminal Airport" -- just to keep our list of war criminals real?
Posted by Jane Stillwater at 9:51 AM