Dear AIPAC: My holocaust is bigger than your holocaust!

Well, I finally did it.  After thinking about it for many years now, I finally sent off to http://23andme.com for a DNA testing kit.  First you send them some spit and then they test it for DNA -- so that you can find out who your ancestors are.

"We will send you the results in six to eight weeks," they told me.  Goody!  Now I can actually find out once and for all if our old family legend is true or not -- that my great-grandmother Mary Elizabeth Ballard Johnston was a full-blooded Cherokee.  If so, that would make me one-sixteenth Original American. 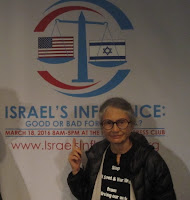 And speaking of dead ancestors, I just flew off to attend a conference in Washington DC entitled "Israel's Influence: Good or Bad for America"  http://israelsinfluence.org/video/default.html and that got me to thinking about Israeli neo-colonialists and how they are always bragging about the size of the Jewish holocaust in Germany under the Nazis, and using that sad and terrible event as propaganda to justify creating a whole new Muslim holocaust too -- like the Jewish holocaust gives them the right to kill as many Muslims as they want.

That would be like saying that just because 80 to 100 million Original Americans were killed by European colonizers, descendants of Original Americans now have the right -- no, even the duty -- to go out and kill as many Chinese or Chileans or Canadians as they want and steal their land too.

But guess what?  I really don't want to kill anyone or steal anyone's land, no matter how the http://23andme.com test results come back.  Does that make me a self-hating Cherokee?  I like to think not.

PS:  The DC conference was a big success, giving me hope that perhaps there might someday be an end to the wholesale slaughter of Palestinians.  I certainly hope so.  Don't you?  Doesn't AIPAC too?  Apparently not.  https://jewishvoiceforpeace.org/trumps-islamophobia-racism-go-hand-hand-aipacs-agenda/

But always remember, AIPAC, that my holocaust is bigger than your holocaust -- and then just shut up about it.  Why?  Because the horror that happened in Germany sixty years ago isn't even your holocaust to begin with.  It belongs to the Jews, not to some Israeli neo-colonialist fascist hypocrites, racists, bullies and thugs who pretend to be Jews.

But I do agree with one statement that she made.  "If you see bigotry, oppose it.  If you see violence, condemn it.  If you see a bully, stand up to him."
Posted by Jane Stillwater at 4:37 PM