When the American-Israel Public Affairs Committee holds their annual convention in Washington DC this March, who are they gonna endorse for the Democratic presidential nominee?  Bernie Sanders, who is Jewish -- or Hillary Clinton, the ultimate war hawk who will support anything that Israeli neo-colonialists decide to do with regard to making "Greater Israel" a reality?

Will AIPAC choose to support the Jewish race and/or religion by going with Sanders, the ultimate Jewish grandpa? 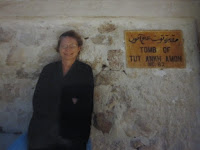 Or will AIPAC go with neo-colonialism and choose Hillary Clinton, the goy who will obviously support attacking Syria, Iran, Saudi Arabia, Yemen, Lebanon, Jordan, the Gulf States, Egypt, Turkey, Iraq (again) and anything else that might get in the way of creating the "Greater Israel" neo-colonialists' wet dream -- even if the USA gets in the way?

This is gonna be very interesting to see how AIPAC's choice turns out.

I'll bet you a bagel that they'll choose Clinton.

PS:  I'll be in Washington DC on March 18 for the "Israel's Influence: Good or Bad?" conference. http://israelsinfluence.org/default.asp
Posted by Jane Stillwater at 11:21 AM