Phoenix, Arizona: Saving the world one crime-novel at a time

Somebody out there needs to step up to the plate and save the world from total destruction -- and do it right now!  But almost nobody else seems to be doing anything about saving our world.  Nobody seems to even notice or care that just the single factor of "war" alone (and the pollution it causes) is heading us straight towards Doomsday.  So if I want my world to be saved at all, looks like I'm gonna have to do it myself.

And so I went off to a murder-mystery readers' and writers' convention in Phoenix AZ last week in order to get some ideas.  The first question I asked, of course, was "Who done it?"  Giant corporations, weapons manufacturers and crooked politicians.  The usual suspects.

"What?" exclaimed a local Tea Party member.  "You're saying that it's not the homeless, food stamp recipients, undocumented workers and welfare queens who are destroying the world?"  Sorry, no.  Just look at your average homeless person -- cold, hungry, unhealthy and sleep-deprived.  Capable of destroying the world?  Hardly.  So if I'm determined to save the world, it's clearly not gonna happen by me hanging out on skid row!

But I did score some free crime novels at the convention and planned to get some ideas from them.  http://www.leftcoastcrime2016.com/

Timothy Hallinan has a new book which is about to be released called "King Maybe" (I got an advance copy!) and its about an anti-hero burglar who steals from the rich.  Now there's a great idea for saving the world.  http://www.timothyhallinan.com/junior.html 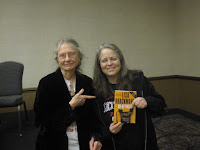 Lisa Brackmann also has a new book in the works that's about to be published.  "Go-Between" is its name, and the heroine takes on the for-profit prison system at one point, another great idea.  I would love to be able to save the world one prisoner at a time -- starting by putting as many corporate CEOs, evil banksters and weapons manufacturers in jail as humanly possible.  Alcatraz, San Quentin, Attica, Sing Sing, Leavenworth, Rikers Island.  Just throw out all the prisoners now in there for stupid crimes like smoking weed and replace them with corporate jailbirds.  Great idea!  http://www.lisabrackmann.com/books/

Phoenix, for some reason, is a very easy city to get lost in because it's so flat and nondescript.  So I walked five miles east instead of five miles west (or was it north?) and ended up in front of the infamous Maricopa County Jail.  Yep, Sheriff Joe Arpio's bailiwick.

"But we love Sheriff Joe!" cried one Phoenixonite.  "There's almost no recidivism on his watch!"  Booyah.  Let's send him to Washington so that he can put our corrupt politicians in pink jump suits instead.  Then let's send him to Wall Street to make corporate CEOs live in prison tents in the hot desert sun.  Works for me.

At one point, Hallinan's anti-hero burglar quotes some guy describing the USA after World War I.  "America is the great unspanked baby of the world."  No one should ever spank a baby.  Ever.  But Sheriff Joe is obviously spanking the wrong crooks.  Paraphrasing Hallinan's burglar, "Senators are just crooks with better healthcare."

And to quote the blurb on the back of Brackmann's soon-to-be-published book, "An all-too-realistic thriller about for-profit prisons, big-money politics, shady non-profits, the War on Drugs -- and  the people who would kill to keep the system intact...."  Why isn't Sheriff Joe out arresting them?


PS:  Here's another report I just received from my anonymous friend in Aleppo, Syria -- this time about the water, power and ceasefire crises there.   His report is entitled, "Yesterday, today (and hopefully tomorrow) in Aleppo, Syria," and can be read at http://jpstillwater.blogspot.com/2016/03/yesterday-today-and-hopefully-tomorrow.html.

Posted by Jane Stillwater at 9:55 AM