Human Beings: The most dangerous predators on the planet

Seven years ago my wonderful granddaughter Mena was born right before Christmas and so every year, because there is a lot less going on in August than in December, she has an "un-birthday" party in the summer instead of an actual birthday party on her actual birthday.

This year, Mena wanted her party to have an animal theme.  Does that mean that I have to get all dressed up in a cat suit or something?  No way!  "C'mon, grandma!  It will be fun!"

So I thought about it a lot and finally came up with a really great animal costume, one that would still let me wear my usual uniform of jeans and a tee.  I simply printed out a sign that read, "I am a HUMAN BEING, the most dangerous predator on the planet," and then slapped said sign on my back.  Problem solved.

The un-birthday party was a huge success.

But then, after reading an article on Global Research stating that four million Muslims have been killed by US and NATO troops since 9-11, I also got to thinking about exactly how completely accurate my costume actually was. 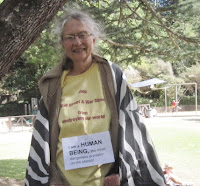 In 2001, an attack on the Twin Towers became an all-too-convenient excuse for Wall Street and War Street to instantly switch into predator mode and heat up their notorious and endless Wars for Oil.  http://www.globalresearch.ca/four-million-muslims-killed-in-us-nato-wars-should-we-call-it-genocide/5470424  And these predator massacres are still going on in Palestine, Libya, Syria, Iraq, Egypt, Yemen and Afghanistan today, 14 years later.  http://mondoweiss.net/2015/08/killed-saudi-bombing

Want more examples of human predator behavior?  Not a problem!

In medieval Europe, human beings executed approximately 57 thousand women for "witchcraft".  King Leopold of Belgium apparently was responsible for two million deaths in the Congo.  Then there were the various wars on Native Americans, Aztecs, Incas and First Nations -- between 50 million and 100 million killed.  My own great-great grandmother walked the Trail of Tears and watched her fellow human beings fall prey to cold, lonely and miserable deaths at the hands of human predators.  https://www.intellectualtakeout.org/blog/8-frightening-characteristics-propaganda

And don't forget those two bloody World Wars and the vicious brutality of Nagasaki and Hiroshima.  https://consortiumnews.com/2014/08/09/the-very-un-christian-nagasaki-bomb/  And the African slave trade and its bloody results, "Straight out of Compton" -- and Ferguson, Baltimore and San Quentin too.  And then there are the current African massacres, millions more human beings dead in the Congo for blood diamonds and that stuff they put in computers.  http://fightimperialism.org/2015/08/09/free-saif-al-islam-gaddafi-stop-the-execution-usnato-out-of-africa/  And the massacres in Indonesia and East Timur, approximately three million more human beings slaughtered for oil.  http://www.counterpunch.org/2015/04/27/genocidal-indonesia-executing-drug-convicts/
Yikes!

PS:   The T-Rex used to be the most dangerous predator on the planet.  Now it is completely and totally extinct.

And then the lion became next on the predator totem-pole list.  I wonder what happened to lions?  Oh, right.  They became an endangered species, mainly because there was nothing else left for them to prey on.  Soon that will probably happen to human predators too.  We'll all be going up in (atomic and/or toxic) smoke. http://www.globalresearch.ca/the-age-of-imperial-wars/5470957

PPS:  Not all human beings are psychotic predators.  Some of us actually shun attacks on our own species.  Really we do.  There really are some mentally healthy humans among us -- take Pope Francis, for instance.  "Human beings, while capable of the worst, are also capable of rising above themselves, choosing again what is good, and making a new start, despite their mental and social conditioning."  http://w2.vatican.va/content/francesco/en/encyclicals/documents/papa-francesco_20150524_enciclica-laudato-si.html

And, heck, even I know better than to kill people for fun and profit.
Posted by Jane Stillwater at 10:21 AM