In the process of writing this article, I've started to feel a bit like a World War II master-spy or Mata Hari or something.  James Bond?

Books have been disappearing from the Berkeley Public Library at an alarming rate lately.  "How many are gone?  And where did they go?"  Time to put on my trench coat and find out.

Apparently our new head librarian has been "weeding the collection" at our main branch -- and doing it all on his own.  This weeding process is usually gently conducted by the library's entire staff, but only after serious consideration for each book.  However, the new head librarian has now taken this task on all by himself and is throwing out books left and right.

But how many books have actually disappeared in the past year?  "Not all that many," claims the new head librarian.  "Just a few.  2,220 at most".  But a closer investigation has revealed that over 39,000 books have gone missing.  Yikes!  http://www.dailycal.org/2015/08/12/berkeley-community-members-rally-over-number-of-books-weeded-from-berkeley-public-library/ 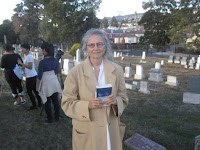 "So what happened to all these books?" you might ask.  Well, apparently some other local undercover agent recently held a stakeout at the rear door of our main library, and what that agent observed was that huge piles of boxes of books were being left out on the sidewalk back there -- and then a large unmarked white van comes along and hauls them all away.

"But where does the van take them?" you might ask next.  Who the freak knows.  I'm assuming that there will be a book-burning somewhere.

"But what kind of books are disappearing?"  Apparently anything to do with women's studies, civil rights, the labor movement, LGBT, etc.  Sounds like an effort to de-radicalize Berkeley and dumb us all down.  http://petitions.moveon.org/sign/librarygate-stop-senseless?source=s.icn.em.cp&r_by=2101677

Then I talked with another undercover agent who said, "Apparently the Koch brothers have financed a library institute that trains librarians how to weed out all left-wing, progressive and anti-empire books in libraries throughout America.  Perhaps this librarian is a Koch-brothers infiltrator too."  Good grief!

PS:  Here in Berkeley, we not only have to worry about librarians "weeding the collection" and burning our books (who would ever think that I would have to write such a sentence!)

Developers here are also marching in, "weeding the collection," tearing down homes and businesses that used to belong to non-Yuppies (probably carting them away in mysterious unmarked white vans too) and building over a thousand condos on our main streets to replace them.

Our mayor is ecstatic!

But the City of Berkeley now has to pay for the extra fire, police, sewer and street services for these new condos and the approximately 10,000 new residents involved.  However, there are families in Ireland who are not so ecstatic about all these new condos.

PPS:  And if you think it's an outrage that our local librarian lies to us, then be prepared to be totally outraged that our corporate-owned federal government lies to us constantly -- through their teeth!

For instance, did you know that NATO is happily preparing for nuclear war with Russia?  And that, contrary to what we are being constantly told, none of this is Russia's fault because NATO (read Wall Street and War Street) started it all?  And that we Americans might even end up getting fried like KFC chicken -- and also have to pay for this pleasure ourselves?  Shades of the Sudetenland lies!  http://www.theweek.co.uk/russia/64754/russia-and-the-west-actively-preparing-for-war

For instance, what exactly do you actually think is going on in Syria right now?  Here's a report from my friend in Aleppo who tells an entirely different story about what is happening there than the one our corporate-owned MSM would have us believe.  https://thewallwillfall.wordpress.com/2015/08/13/syria-from-the-sublime-to-the-shameful/

Or consider this report by Andre Vltchek on refugees from the Middle East now hunkering down in Europe?  Why are they there?  Not for the hate-filled reasons we are being told.  Read this to find out.  http://www.counterpunch.org/2015/08/14/the-refugees-are-coming/

In the Middle East, the foxes are definitely guarding the hen house.  According to America's official Congressional position, the United Arab Emirates is now in charge of "addressing humanitarian relief" in Syria and Iraq -- even as the UAE pays for and supports ISIS.   http://www.counterpunch.org/2015/08/18/huffington-post-arabic-a-new-lair-for-the-muslim-brotherhood/

Turkey is now in charge of "stopping the flow of foreign terrorist fighters".  Hell, Turkey welcomes them with open arms and then sends them on over to Syria (to force the New Ottoman Empire down Syrian throats) http://www.counterpunch.org/2015/08/20/ankara-the-new-capital-of-jihad/, and to Iraq (to kill more Kurds)!  http://www.dailymail.co.uk/news/article-3202317/Kurdish-activists-condemn-Turkish-police-naked-bloodied-corpse-female-militant-killed-country-s-special-forces-leaked-online.html

The United States is currently in charge of "supporting military operations, capacity building, and training" -- apparently of ISIS.

Britain has been put in charge of "exposing ISIS's true nature" -- even as it gives ISIS hot tips on how to run an appealing FaceBook page.

And of course let us also consider the biggest lie of all -- the 9-11 "conspiracy theory" theory, wherein no pilot or engineer alive today can even think about (let alone mention) all the many flaws in the official story of that tragedy without being laughed at or shamed by the MSM.

Talk about your propaganda?  Javohl for sure!
Posted by Jane Stillwater at 9:49 AM