San Diego, March 2020: My very first lock-down experience (but unfortunately not my last)
Editor's note:  Remember how surprised we all were -- back when the lock-downs first started?  'It's only going to be for a few weeks," they told us.  "It's only until we flatten the curve."  Yeah, right.  Here is the first chapter in my proposed book, "2020: My Year of Living Dangerously During the Lock-down".   It will take you back to a time that we can now barely remember -- 441 days ago, back when we weren't all locked down and injected. 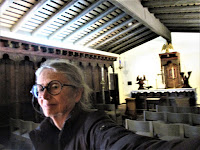 March 9, 2020:  For some unknown reason, I'm not getting very excited about my upcoming trip to San Diego.  "Just think about the adventure!  The possibilities!  All that stuff to write about!" I keep telling myself -- yet all I'm feeling right now is anxiety and a headache coming on.  Not even stepping onto a BART train to the airport with a suitcase in my hand is perking me up -- although it was kind of fun to do my chicken dance at the TSA checkpoint after they had completely ignored me for ten minutes.
I was trying to patiently wait my turn for that metal detector thingie but the TSA guys were working really hard at ignoring me, but it's pretty hard to ignore a 77-year-old lady who is doing a chicken dance and singing "Take a chance on me!" at full throat for ten minutes.  The bastards are lucky I didn't twerk.
All that turbulence on the airplane didn't help either.  How am I going to fly all the way to New York City in April when I'm this disinterested in merely flying to San Diego.  But the good news is that I only got lost four (4) times on the way from the airport to my AirBnB, way out in the suburbs.
However.  Now that I'm here, it's not really clear if I'm going to survive spending the next six days with a hovering-helicopter-style AirBnB host.  I already love her dearly -- but she's definitely a germaphobe freak.  I have to swab down the bathroom and kitchen sinks every time I use them.  Not allowed to eat in my room.  Have to wear special disposable house slippers.  Arrgh!  Sooner or later she's going to find out the deep dark truth about me -- that I'm not all that afraid of germs.  No, I'm not a slob.  But I'm not exactly a neat-freak either.  What am I to do? 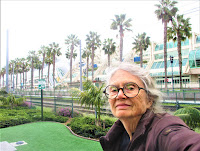 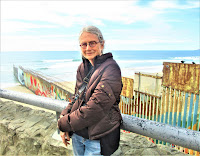 I only have one more day in San Diego -- so time to make the most of it even if I'm a sleep-deprived zombie.  That woman I met on the #120 bus just called and asked me to meet her in Point Loma.  Point Loma!  "Get off the trolley at Old Town and then catch the #28 bus."  But that bus only comes once an hour so I went to the Lane Field Waterfront Park instead and stared at all those abandoned cruise ships.  And saw a baby manta ray too.  So cute.  And threw a penny into the San Diego Bay in order to make a wish.
"I wish that people would just freaking shut up about COVID-19 and stop being such wimps."  The entire media has gone freaking nuts about this coronavirus -- but nobody in San Diego is coughing or even wearing a face mask.
Next stop?  Back to the central library.  I love libraries.  But tomorrow this one closes for three weeks.  "And my church was closed today too," said the bus lady.  Seems just a bit extreme.
Then I jumped on the San Ysidro trolley again, got off at the borderline McDonalds, bought some fries and crossed over into Tijuana.  Again.  I'm so proud of myself.  "No Fear!"  And the photos of me on top of the famous Zebra Donkey were awesome.  They looked just like the one taken of me as a kid on a Zebra Donkey way back in 1953.
Then I bought more refrigerator magnets, priced some tequila (too expensive) and snagged a taxi back to the border.  The cabbie only drove me one freaking mile.  "That will be 22 dollars."  Nice try, buddy.  I handed him a ten-dollar bill, threw in a dollar tip and fled.  Whew.
Back to the USA.  Back to McDonalds.  Back on the trolley.  Wonderful day.  I can safely say that I have experienced San Diego to the fullest extent -- given that I only had such a short time.
March 16, 2020:  I actually got seven (7) whole hours of sleep last night.  Now I'm good to go.  And I checked in with my house-sitter back in Berkeley.  She'd already left.  "But I totally stacked your refrigerator before leaving, even bought you a whole leg of lamb -- so you are all set for the lock-down."  That should last me for the full 14 days of the lock-down.  Now all I gotta do is pack up and head off to the airport.
But wait, what?  The State of California just issued a verdict that anyone over the age of 65 has to stay at home because apparently they get the disease more easily and can therefore spread it.  Say what?  Now anyone over age 65 has become the new Typhoid Mary?  Xenophobia against seniors as well as Chinese?  That sucks eggs.  What?  We're just spozed to stay out of sight and quietly starve to death?  Will I need to get Botoxed before I can go out?  Screw that.
March 17, 2020:  I may not have seen everything in San Diego but, damn, I've come pretty close.  And considering that both Legoland and the Zoo are out of bounds due to COVID-19, I did amazingly well.  I miss San Diego already.  I miss Tijuana.  I even miss my Air BnB host's obsession with being super-clean.  I wonder, however, what she will think about hand sanitizer now.  https://archive.ph/EHrFH

Posted by Jane Stillwater at 1:40 PM